This library extends the Akka Actor system to realize captureing causal relationships and reverse debugging. Note that this implmentation is too experimental and there are several limitations for debugging.

Important: After ver 0.2.0, you don't have to rewrite source codes by introducing AspectJ.

Create file project/plugins.sbt in your project with:

Then, add the line below to build.sbt:

Add the settings to (src/main/resources/)applications.conf in your project with:

The debugger attaches an additional information (internally, called Envelope) to all the messages sent by actors with !. It includes sender and receiver's Actor pathes, Lamport timestamps, and auto-generated UUIDs.

On the other hand, the DebuggingSupporter of an receiving actor opens an envelope and delivers the original message to the actor. The idea of interception comes from Receive Pipeline Pattern

The figure below provides an overview of processing incoming messages (envelopes). 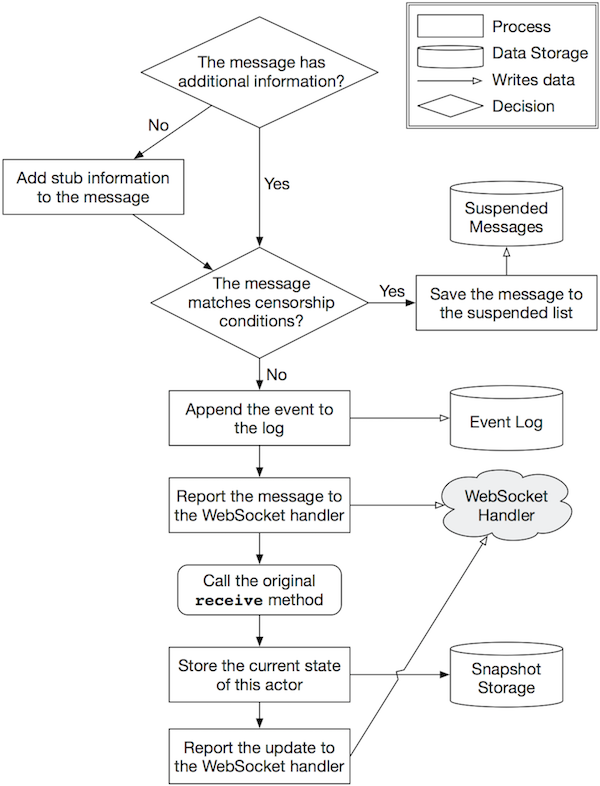 DebuggingSupporter stores the state (variables) of the actor itself every time when an actor finishes processing an incoming message, that is, finishes receive. Currently, all vars in the classes that extends Actor are to be captured.

AspectJ (a framework for Aspect-oriented programming) enables the debugger to hook Actors' behaviors such as sending or receiving messages without modifying source codes. In this work, I used akka-viz and kamon-akka as reference and they were very helpful.

This implementation does not cover several functions of Akka or Scala, such as: