Simulink and Embedded Coder generates and executes C and C++ from Simulink diagrams, Stateflow charts and MATLAB functions. With MbedTarget the generated code is built on top of MbedOS and executed as a real time application on Mbed compatible microcontroller boards. MbedTarget is an addition to Simulink and Embedded coder. It needs MATLAB versions 2016b. Newer versions may work but are not fully tested.

Beside MbedTarget other, similar targets exists:

All targets implementing necessary information to use Simulink and Embedded Coder with mostly STM32 microcontroller. Each target has its advantage and disadvantage:

The main disadvantage of all targets: They are closed source. Own extensions are difficult to realize or even not possible. The supported MCUs depends on the manufacturer, mainly STM32 products are supported.

Mathworks offers some more targets like NXP KL25Z and K64F, Infineon XMC and BBC micro:bit. Although the selection of Cortex-M controllers is huge, the selection of targets is quite restricted.

MbedTarget is completely open from both sides: MATLAB code, templates, configurations etc. as well as the MCU libraries. It is based on MbedOS 5, therefore theoretical all MbedOS 5 compatible microcontroller boards can be used to run Simulink models. It must be said theoretically, since (i) it is tested mostly with STM32 based boards and (ii) it is supporting the port pin naming scheme as used by STM (PA_0, PB_12, …). Wiznet, Realtek and Nuvoton are using the same scheme, MCUs of other vendors use a different scheme. A universal pin naming scheme is planned for the near future.

The principle workflow when processing a Simulink model to an executable binary is shown in the following figure. 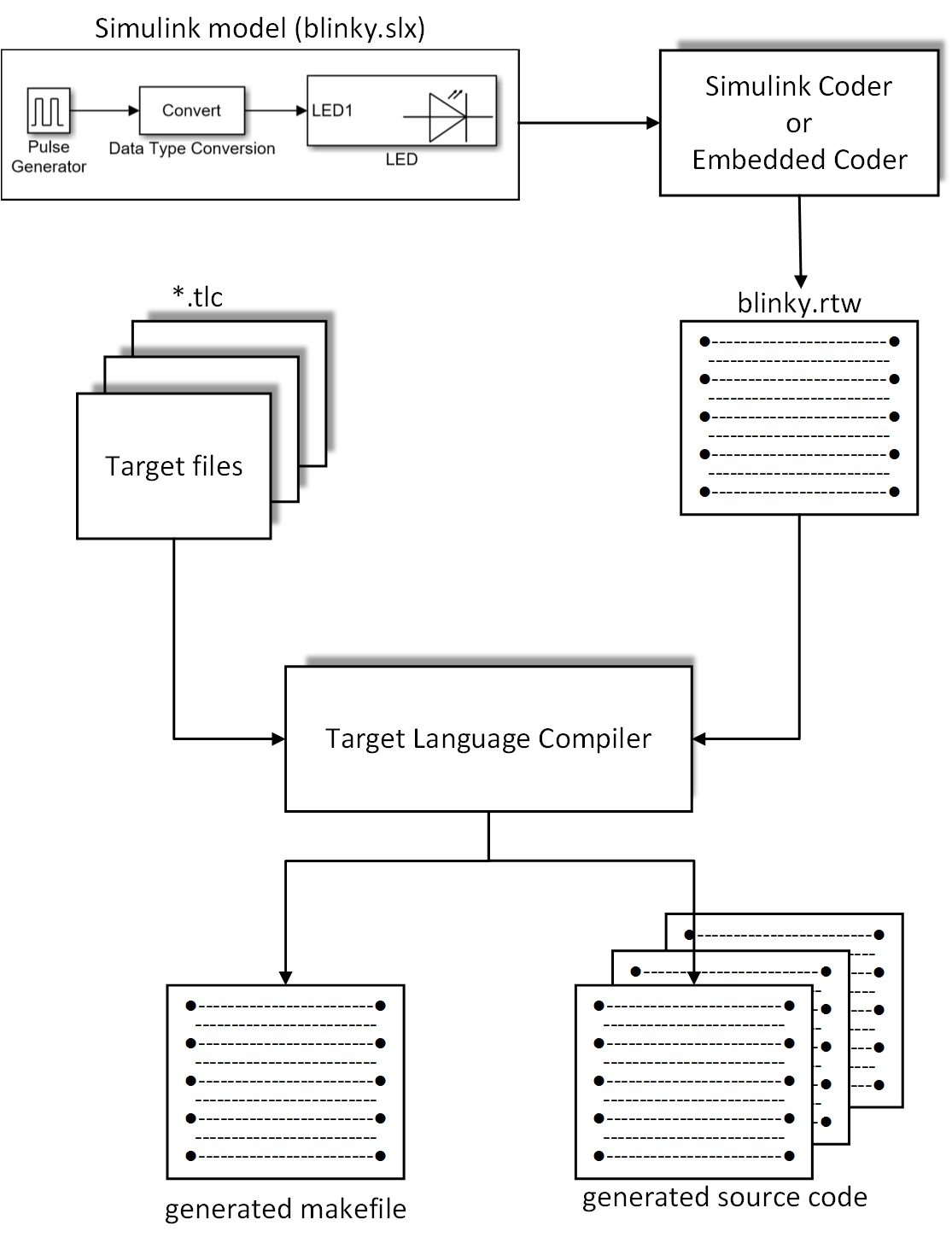 Simulink or Embedded Coder are generating an rtw file from the model. That is a specific textual representation of the model. Together with tlc files which are part of MATLAB and of the specific Simulink target, the target language compiler generates several c/cpp/h files and a Makefile. The following steps depends on the specific target.

The standard way to use a Simulink target is the model configuration. Under Code Generation a System target file can be chosen. But other ways exist.

MbedTarget uses the standard way based on selecting a tlc file: mbed.tlc is the option that has to be chosen for the Embedded Coder. A Simulink Coder based System target file is in preparation. The following figure depicts some more MbedTarget specific details of the above depicted procedure: 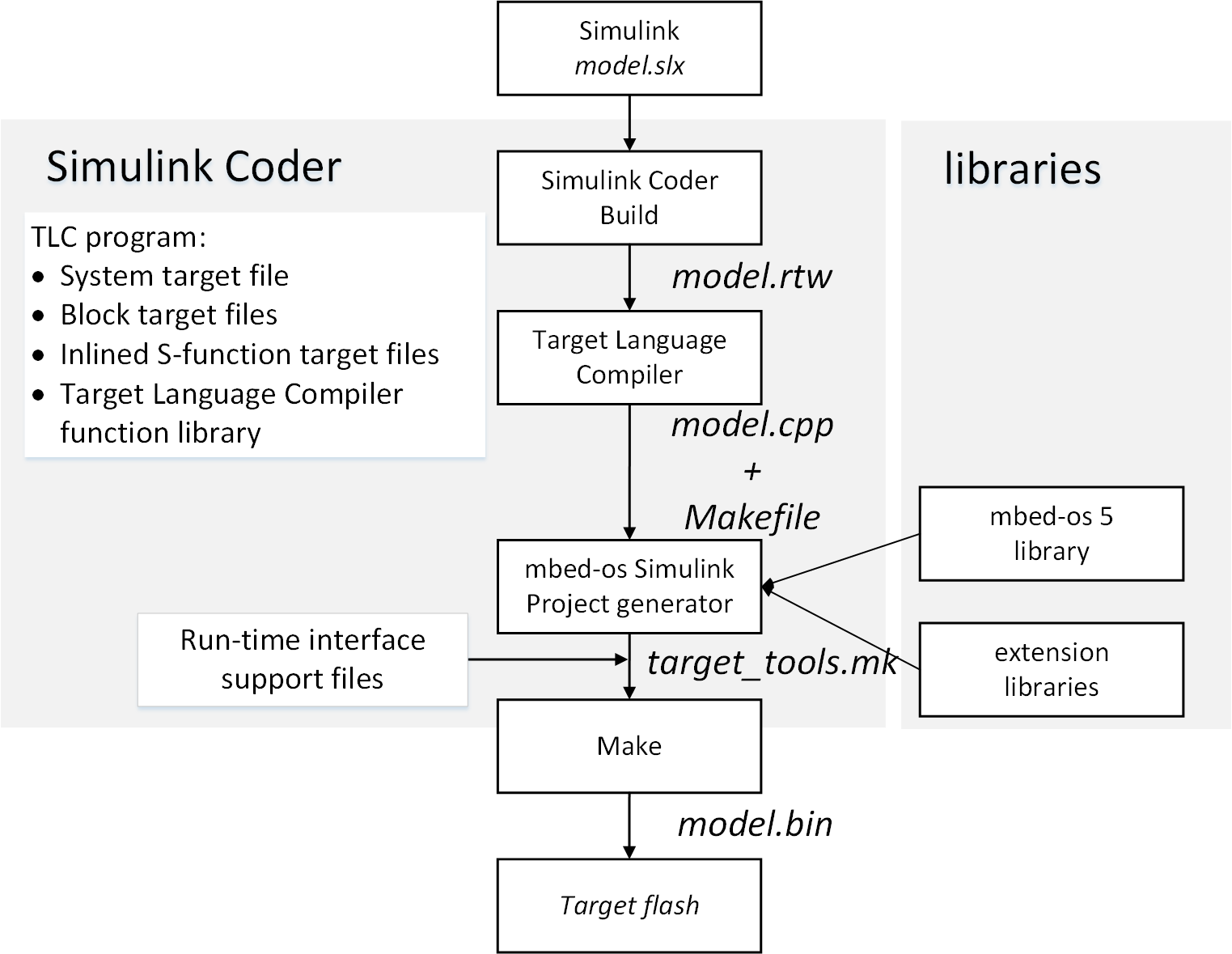 The target language compiler offers several hooks to customise the code generation process. Mainly two hooks are used: before calling make and after calling make. The whole procedure can be described with the following steps:

This include file is very similar to a standard gcc makefile generated by the gcc_arm exporter, but is adapted to the needs of the Simulink build process. This Simulink exporter is not part of the official MbedOS library but can be incorporated into it by applying a patch.

The following figures depict this process. The Simulink model board_unspecific_blinky is built by pressing the Build Model button. MATLAB creates a folder board_unspecific_blinky_slprj in the current working path. In this folder all generated files are stored. When this is finished, the first hook is called by MATLAB.

During this call a new target specific folder is created under mbed_target/target. The original folder name is extended by the target name, e.g. board_unspecific_blinky_NUCLEO_F446RE_slprj and board_unspecific_blinky_NUCLEO_L476RGslprj for the above model and two different targets NUCLEO_F446RE and NUCLEO_L476RG. All generated files are copied to this folder and a make include file is generated by the Mbed offline tools (target_tools.mk). The first used hook method ends here. 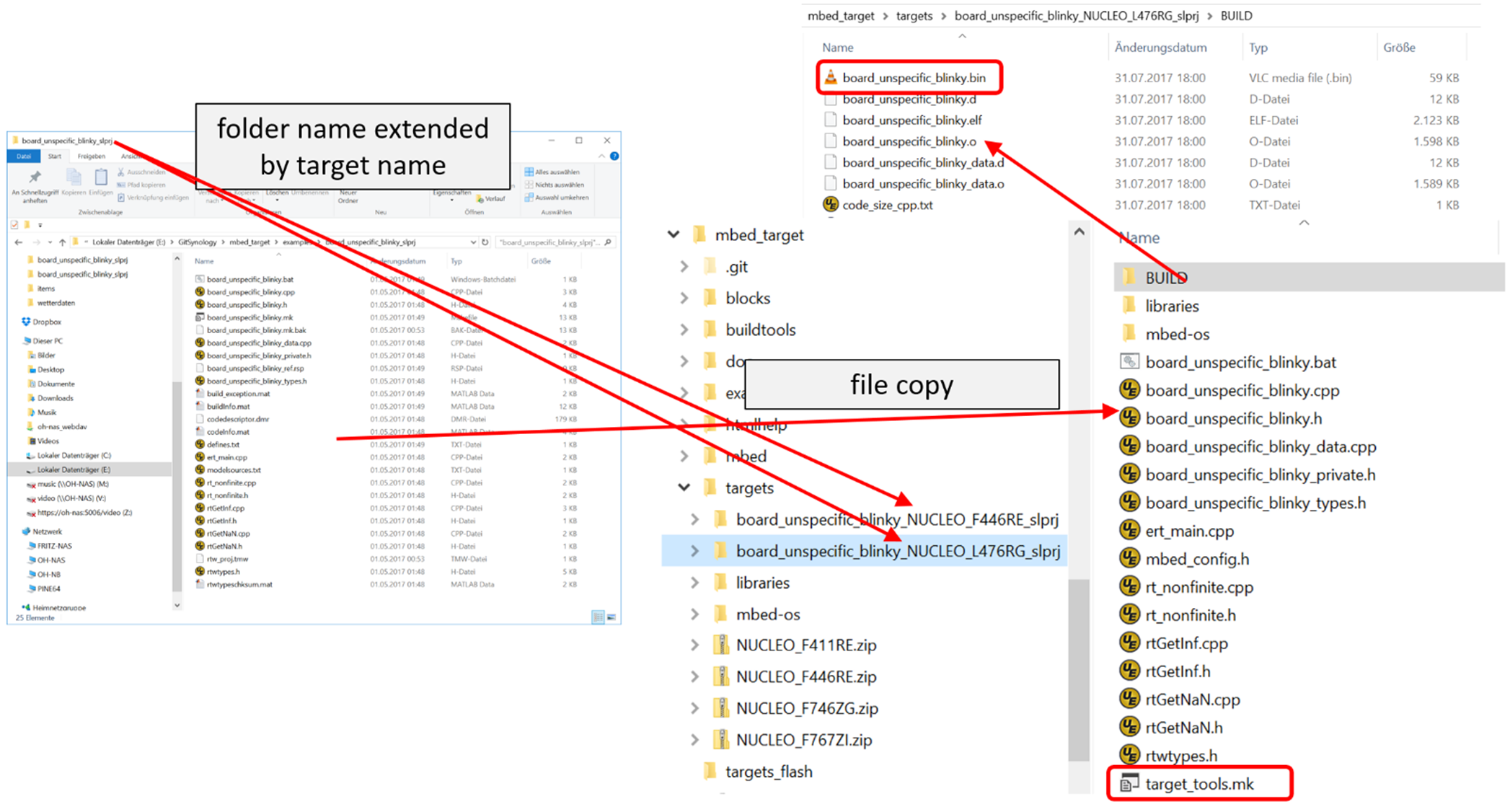 During the second hook, this file is flashed to the target board. When it is an Mbed compatible board, it has a mass storage programming method. That means the bin file can be copied to its USB drive. Other programming methods exits as batch files under mbed_target/targets_flash. The method can be chosen under the Mbed specific options under Code Generation in the model configuration.

This chapter describes shortly the components of an MbedTarget Simulink block. The Digital Output block is one of the simplest blocks: 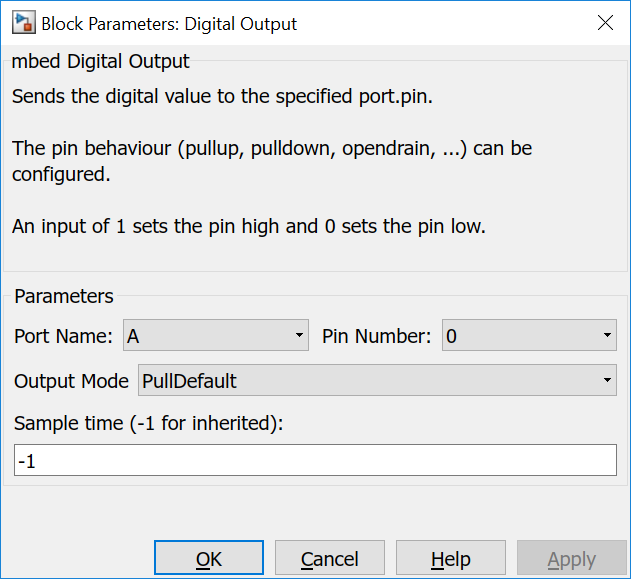 The block has 4 parameters:

These two parts are everything which is necessary to create Simulink models.

To implement custom Simulink blocks, 4 elements are necessary in the minimum: 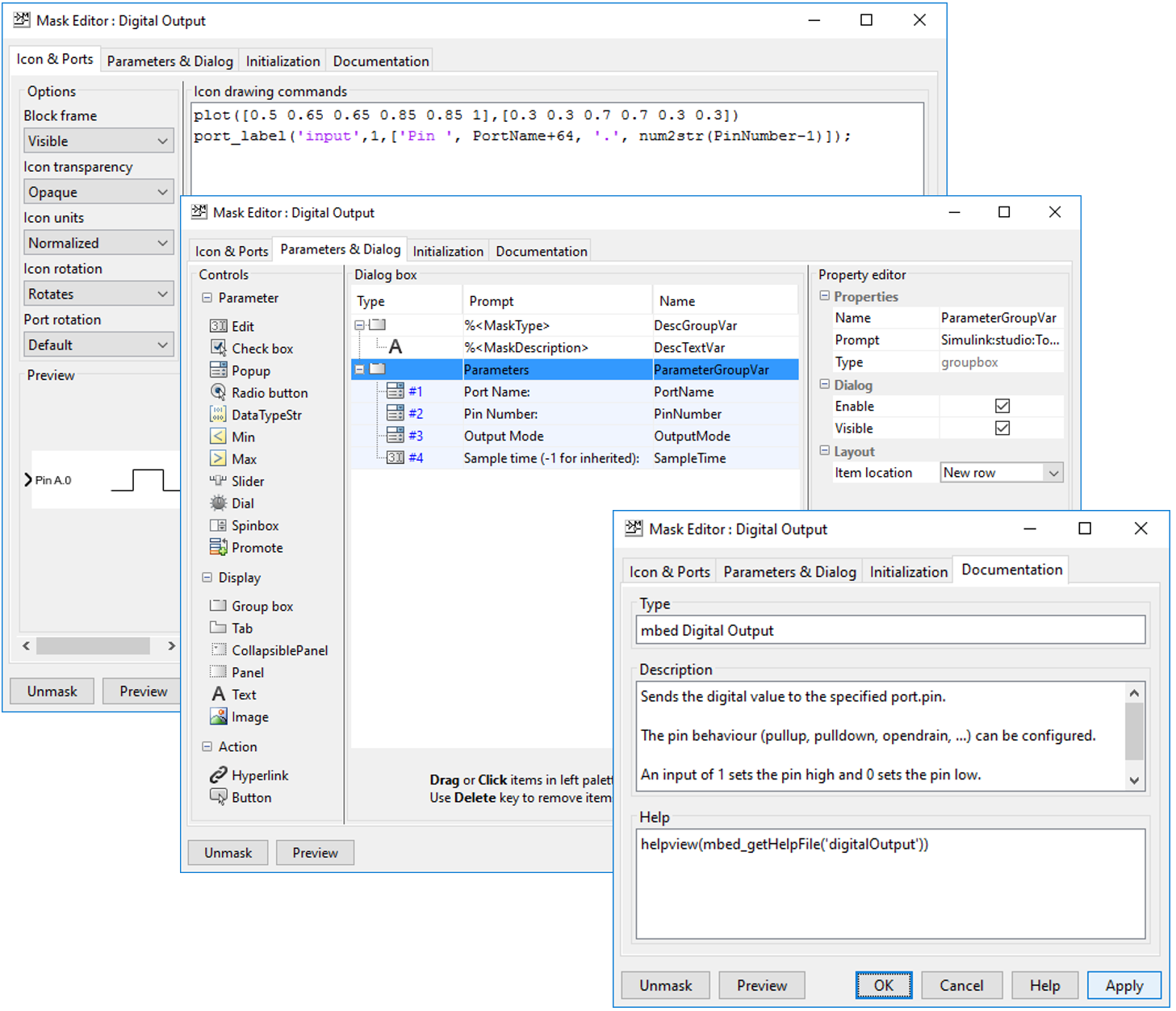 The first defines the outlook of the block as shown in the model editor. Normal MATLAB function can be used within the editor textfield to plot and/or write graphics and text or write input and output labels.

The second card defines the input fields available in the Block Parameters dialog.

The last card defines the block title, a short help text and a command that is called when the help menu item in the context menu of the block is chosen. 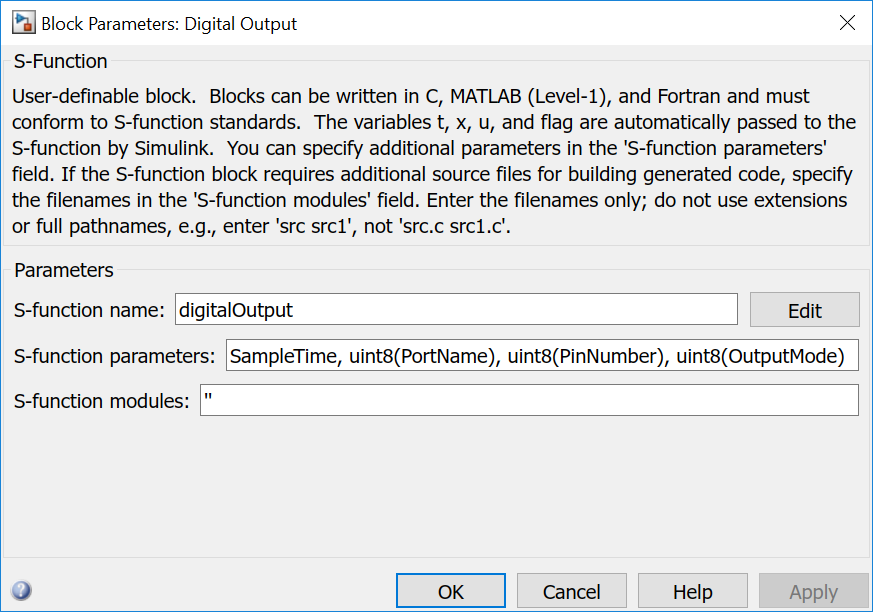 It can be found in the context menu of the block.

In MbedTarget the S-function mainly describes the behaviour of the block: number and type of input and output ports, checks parameter and prepares the transfer of these to the TLC and the tlc file.

The tlc file is a mixture of tlc code, a script like language, and cpp code, i.e. Mbed cpp code in a form like snippets. The tlc script code controls the usage of the cpp snippets and how and where they appear in the final generated code. The tlc file consist mainly of three part: Setup, Start and Output. Setup controls the inclusion of additional header and c files. Start is executed once to generate initialization code and Outputs is called in every simulation loop. Even if the name is Outputs, the function has to handle also input values.

In the following Start and Output function are described in detail:

The first two line fetches the variables from the block mask dialog and creates the pin name as used for STM32 microcontroller, e.g. PA_0, and assigns it to the third variable.

These three lines create a unique name based on the complete block path, e.g. board_unspecific_blinky_LED for a block LED in a Simulink model board_unspecific_blinky. The Simulink path contains ‘/’ for its components (model name, submodel names, block name). This character and spaces and minus characters are replaced by underscore. So all other characters in model name, submodel names and block names has to be compliant to c/c++ naming scheme.

These lines creates one line in the declaration section. Based on this template:

and by substituting the variables name and pname with the above created values, a code line like:

These lines put a single line into the initialize method to configure the output port mode.

The switch-case, implemented in TLC script code, is interpreted by the TLC but did not appear in the generated c/cpp code.

This block is not enclosed by the openfile - closefile construct as the previous block. Everything in Start without this enclosure is put into the initialize method. With this enclosure other positions can be chosen, e.g. "Declarations" for global variables. Please have a look into the appropriate MATLAB documentation for all possibilities.

The code generated by the Outputs function of each block is called once in the step function. So it is called with the period step size as configured in the Solver section of the model configuration or less often when the Sample Time option is used.

The above line assigns the value at the block input port to the variable u1_val.

To be able to write the value to the instance of DigitalInOut, the instance name is necessary. It is generated identical to the Start method.

These lines put a single line into the step function: the value u1_val is written to the instance name of DigitalInOut.

All other blocks are working similar, more or less. For the complete documentation, please have a look into the Matlab documentation and into the source code of the other blocks. The block documentation contains a detailed descriptions of the block, its interface, usage and the code generated by the corresponding tlc files.

To create the main function, MbedTarget contains a template file: mbed_srmain.tlc. The target supports the single task model of Simulink. For this and the other models please have a look into the appropriate MATLAB documentation.

The cpp file name with the main function is always ert_main.cpp.

Depending on the UseMbedRTOS flag, two different main variants are created:

The step sizes are calculated based on the globally configured model step size.

The main loop of the thread calls the Simulink step function. The Ticker instance creates the correct timing. Both are communicating using an RTOS signal.

The initialization function initializes the application.

Nothing more to do for the main function.

The terminate function is not used and never called in MbedTarget.

The correct timing is realized by a Ticker instance.

The initialization function initializes the application.

Nothing more to do for the main function.

The terminate function is not used and never called in MbedTarget.