An audio visualizer for SuperCollider synths inspired by the butterfly effect

An audio visualizer for SuperCollider synths inspired by the butterfly effect. 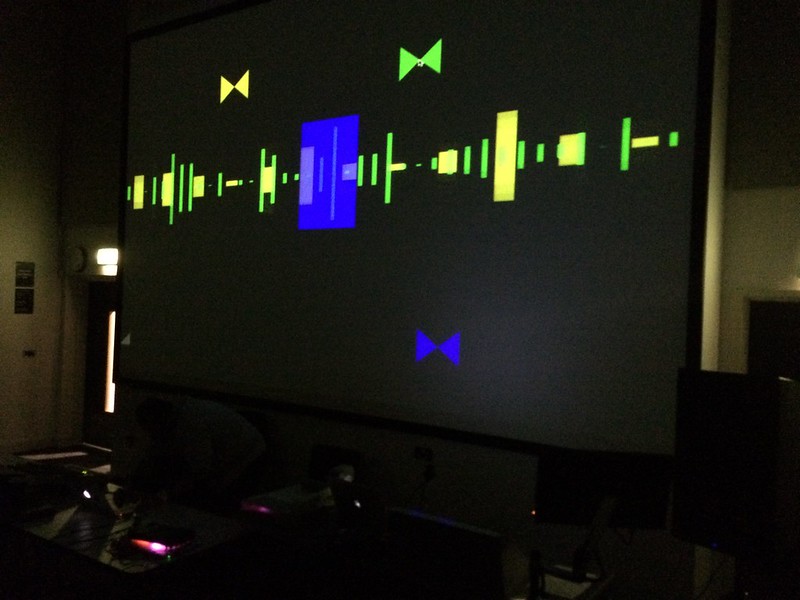 Thanks to the computational power of modern digital audio, a massive number of sound unit generators added together - with noisy intentions - can all be modulated in a way that is different for each generator, but at the same time controlled by the same one dimensional parameter on the user interface. Sometimes it happens that the sonic output of such synths be meaningful ( to some extent, again it helps a lot to be after noisy outputs )
despite being the result of the sum of apparently chaotic behaviors (in fact it's the complexity given by the computation that gives it the appearance of being chaotic). Even more surprisingly, sometimes a change on the user interface parameter results in an overall change in the sonic output that is distinct and recognizable and responds to the user gesture in a meaningful way.

This sort of "order emerging out of chaos" is what inspires Butterfly, a sonic visualizer built with the aim to try and reproduce this behavior in the visual domain. To have a number of simple graphical elements, each modulated differently in their appearance by a unit generator, and see if some complex visual pattern would emerge.

The result is a sort of general purpose scope viewer that can be mapped arbitrarily to any internal bits of SuperCollider synths to see if something magic happens! It is intended as a interactive instrument that can be manipulated in real time for generative audio visuals performances. The visual tool can be used with any SuperCollider synth definitions, even your own as long as they fulfill some requirements (see below for more details).

Butterfly is made 100% in SuperCollider for SuperColliderists, it was developed during the second Gen.AV Hackathon on generative audiovisual tools.

You can execute a SuperCollider script by opening it in the ScuperCollider IDE, which is included in the SuperCollider installation package, and press ctrl+Enter after placing the cursor anywhere in the script after the initial parentheses.

Right-click on one of the four butterflies to activate it. This will start a synth and the related visuals. You can move the butterfly to manipulate two parameters linked to its x and y position, just left-click on it and drag it around. Each butterfly can only be dragged within its area. The screen is automatically divided into four uniform areas: top-left, top-right, bottom-left and bottom-right.

Right-clicking on an active butterfly will deactivate it and stop the sound and visual associated to it.

If the variable kFULL_SCREEN (see below for more info on configuration variables) is set to true, Butterfly will run in full-screen mode. To exit the application then, just hit alt+f4 on Windows or cmd+w on Mac OS.

Use Butterfly with your own synths

If you happen to know the SuperCollider language, the Butterfly interface can work with any Supercollider synth out of the box-ish, as long as they follow some conventions in the naming and they properly send trigger messages back to the SuperCollider client.

In order to use your own synth you must:

A plausible example of sending the trigger is using the Mix UGen as in this example:

Other variables that you can optionally set are:

An audio visualizer for SuperCollider synths inspired by the butterfly effect