Grep for something, then write the original files directly through the search results.

Note: This plugin works on Unix-based systems, but probably doesn't work on Windows.

The plugin exposes the command :WritableSearch, which takes a search query and performs a grep (or ack, or a different search command -- see the Compatibility section), with that query. For example: 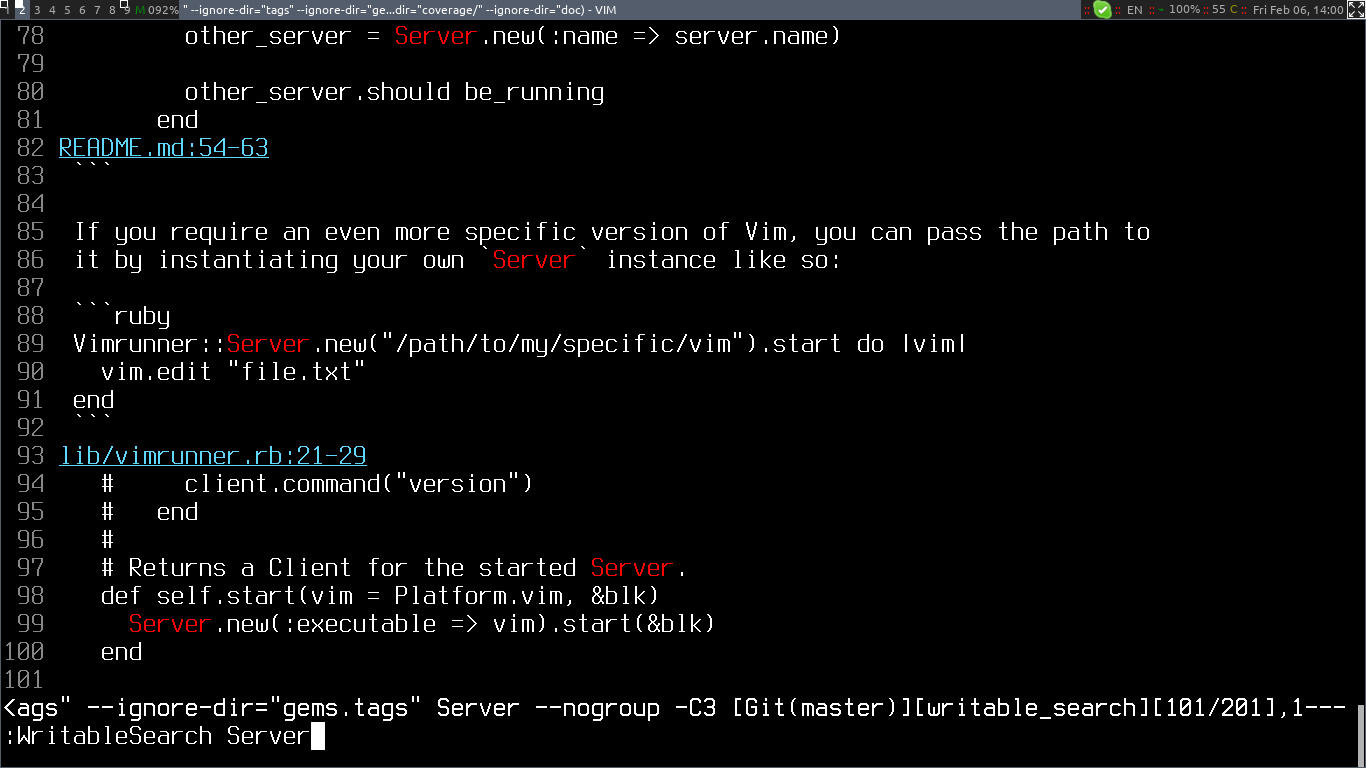 The results are opened in a new tab (by default), and are very similar to what you would get from performing the search on the command-line. The difference is that you can now edit this buffer and, upon writing, the original files will be updated with the changes.

This gives you a very simple and straightforward search-and-replace process. However, read this document to the end for some important gotchas.

If you change the filenames in the header blocks, those files will be renamed (with some manual confirmation that you can turn off if you're feeling adventurous). For example, if the header says:

and you change that to:

Then the file foo/bar.txt will be renamed to foo/renamed.txt. If this is not possible, you'll get an error.

If you change the line numbers displayed in the headers, the virtual "window" that this search result is pointing to will reposition itself to those line numbers. For example, if the header says:

and you change that to:

Then the lines displayed will now be the ones from 10 to 22.

The command :Rerun defined in the search buffer can be used to perform the last search again, with additional flags. For example:

If you call the :WritableSearch command with no arguments, it will take the word under the cursor and search for that. If you call it while having marked something in visual mode (with :'<,'>WritableSearch), it will use the current visual selection as the search query.

If you do this often, you might want to create a buffer-local mapping for quickfix buffers by editing the file ftplugin/qf.vim and creating the mapping like so:

By default, the plugin attempts to find the "best" search mechanism that can work. It tries to use git-grep if you're in a git directory, ack.vim if the plugin is available, and so on. It falls back to egrep as the final resort.

This is encoded in the variable g:writable_search_backends, which holds a list of all the types of searches that will be attempted. See its documentation for details, but here's a short summary of the possible items, in their default ordering:

So, if you want to use only ack.vim and fall back to egrep if the ack program is not installed, you would put this in your ~/.vimrc:

The plugin could also use ag (or it could use ag through ack.vim), but right now, there are some problems with it when dealing with matches at the ends of files. It's recommended to stick to ack or egrep.

If you want to plug in your own, potentially complicated search expression, and have the plugin make it writable for you, you can put the results in a buffer and invoke the parsing function directly:

This will try to parse the contents of the buffer and turn them into a writable_search buffer. However, the format must be the same as the output of grep with the options "-n/--line-number" and "-H/--with-filename". This looks like this:

The resulting writable_search buffer for this example would look like so:

Pull requests are welcome, but take a look at CONTRIBUTING.md first for some guidelines.

Grep for something, then write the original files directly through the search results.