In June 2017 we published an analysis of music festival data which highlighted the scarcity of female headliners, the dominance of 20 acts which make up a quarter of all headline slots, how Glastonbury headliners are getting older, and the rise of pop and hip hop and decline of electronic and rock.

Festivals that were not defined around headline acts were excluded. These include Creamfields, Boomtown Fair and Womad. Fairport's Cropredy Convention was also excluded as it is traditionally headlined by its organisers.

We selected festivals using Festival Insights, a publication that runs the UK Festival Awards and publishes a list of the top 250 music festivals in Europe. The Spotify API was used to obtain data on genre, popularity, and related artists, and data compilation and analysis was done with both Python and R.

Not included in the final article was a network analysis of the festival headliners and related artists. You can see a network diagram showing just headliners here and one showing headliners and all artists that Spotify identifies as 'related' here.

The network analysis shows headliners clustered with others that are considered 'related' by Spotify, and the size of each node reflects the numbers of other headliners that are related to that artist. An artist like Razorlight, then, is shown as more 'typical' of a festival headliner (large node, central position) than a peripheral artist like The Black Eyed Peas (only connected to one other headliner, and one the periphery of the network)

Likewise the network analysis shows that the Britpop cluster (centre right) features more heavily among headliners than 80s artists (upper right), and artists connecting both clusters include The Cure and New Order. You can see who connects other clusters in a similar way. 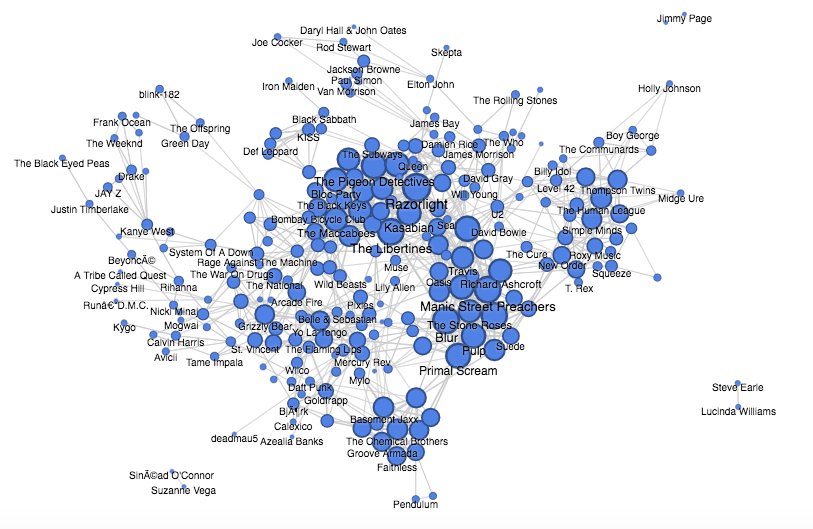 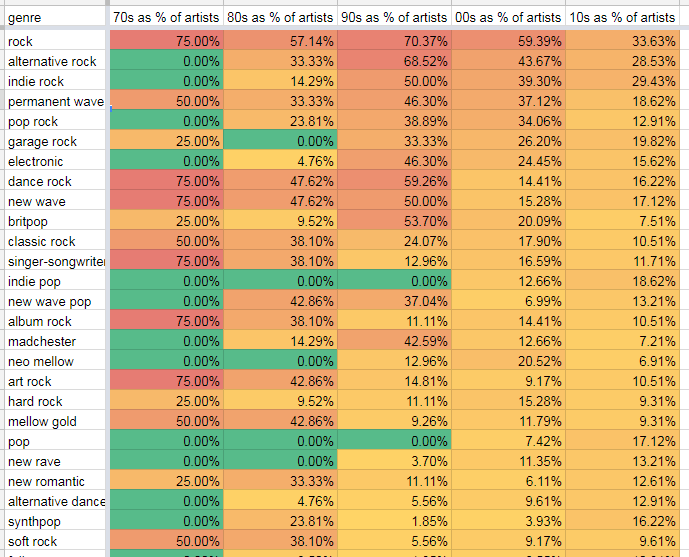 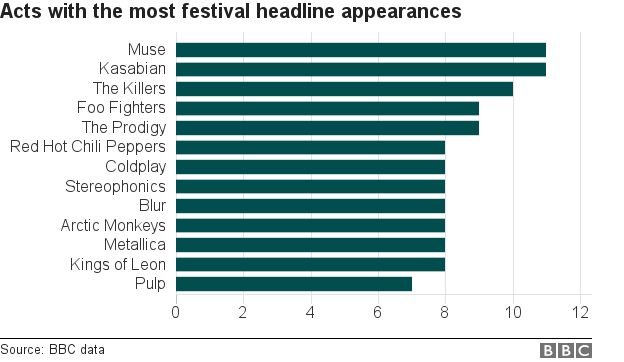 The Times's Peter Yeung and Ella Wilks-Harper also did an analysis of data relating to music festivals in two articles and identified similar trends: Four-fifths of acts booked at major festivals are male and Will we rock you? How UK festivals have changed their tune explored gender and genre respctively. The sample was slightly different: 8 festivals over 10 years, and main stage acts (we looked at headliners at 14 festivals over 46 years).

Back in 2010 Caroline Beavon analysed a range of data related to music festivals for her Datamud project while an MA student at Birmingham City University.