This work is a result of a collaboration between myself and Michael Axelsson, Professor, University of Gothenburg, Department of Biological and Environmental Sciences (http://www.bioenv.gu.se/personal/Axelsson_Michael/). Professor Axelsson has been investigating using inexpensive hardware and 3-D printed parts in order to capture video/photos from various types of microscopes. The final hardware/software solution would be primarily targeted to a teaching environment. After research, Professor Axelsson had selected the Raspberry PI (RPI) Model 3 as the computer system. Coupled with an RPI camera (V2 model) with flex cable, an SD card (for the OS), a power cable, a touchscreen display (Sundfounder 10” screen (https://www.sunfounder.com/10-1-touch-screen.html) with a 3D printed enclosure, and 3-D printed parts used to mount the RPI camera to each microscope; he had an inexpensive system that offered high resolution video and photo capture capabilities. What was needed was software. Professor Axelsson contacted me about using my PiCamera software (https://github.com/Billwilliams1952/PiCameraApp) to control the system. However, after further discussions, I decided to develop a user interface from scratch targeting a touchscreen display.

Professor Axelsson has documented the R&D effort - see http://microsurgery.se/ under the R/D tab.

The work has been documented at https://blog.pi-top.com/2019/03/05/can-you-use-a-pi-top-for-microsurgery-training/

This version of microVIEW is optimized for a 1280x800 touchscreen display running in fullscreen mode. Where possible, all controls are simple pushbuttons or sliders that are created specifically for microVIEW. There are no text fields in the option panels. The buttons and sliders have been enlarged to minimize 'touch' errors. In general during normal opeation, a keyboard should not be needed.

When microVIEW is first started, it creates a default microVIEW.INI file if one does not already exist. The default values may be edited to change many aspects of the program interface, file storage locations, and default camera programming values. Key microVIEW.INI data that the user may want to initially edit include:

When started, microVIEW displays a fullscreen preview of the video. Along the bottom are four buttons: 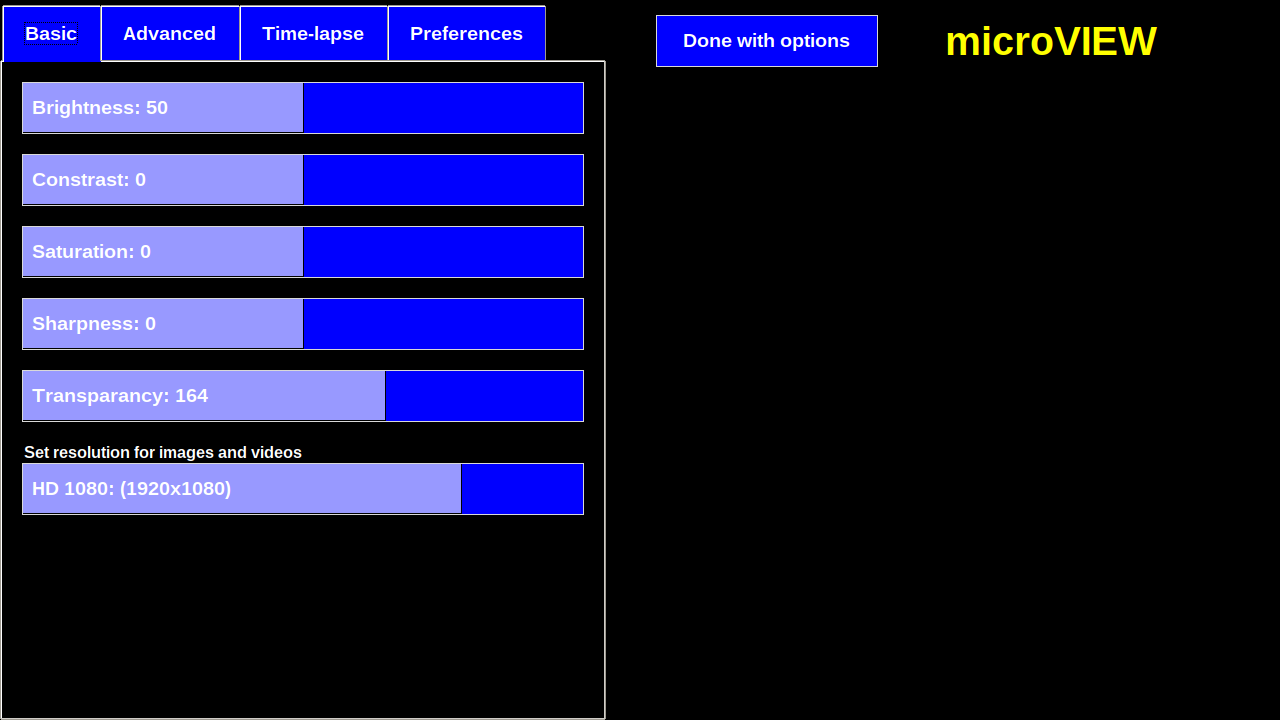 Both Video and Photo timelapse capture are provided under Timelapse | Photos and Timelapse | Videos.

Refer to Preferences | About | About for the version number of microVIEW.

microVIEW has been developed using Python ver 3.5.3. In addition, it uses the following additonal Python libraries. Refer to Preferences | About | About for the exact versions used.

Download the zip file and extract to a directory of your choosing. To run, open a terminal, change to the directory containing the source files, and enter sudo python3 microVIEW.py.

Installation on a Fresh Image

On a fresh install of Raspbian

(2) Once the update is complete, update everything to the latest version by entering:

(3) Then install ImageTk for python3 by entering:

(5) If there is a black border of unused pixels around the screen display, you’ll need to disable overscan, otherwise the button overlays won’t line up with the actual buttons underneath the preview. Edit the /boot/config.txt file by opening up a terminal and entering the following command:

(5.1) Find and uncomment the disable_overscan=1 line by deleting the ‘#’ character:

(5.2) Save then exit by entering Ctrl+X and then pressing Y to save the file.

(6) Make sure you enable the camera. On the main menu, select Preferences, then ‘Raspberry Pi Configuration’. Once the configuration screen is up, select Interfaces, and Enable the Camera.

(7) Reboot your RPI. The black border should be gone, the Camera should work. After changing to the directory containing microVIEW, it should start up using the command: