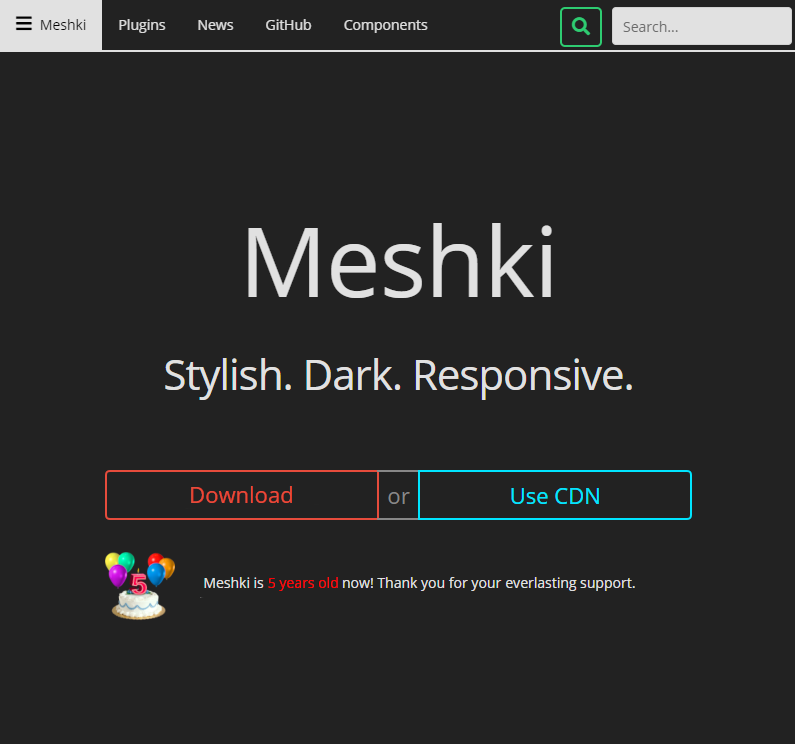 Meshki is a simple, black-colored, responsive boilerplate to kickstart any responsive project.

Check out https://borderliner.github.io/Meshki/ for samples and details.

Getting Started (for users)

There are a couple ways to get Meshki (choose only one):

# Build (for developers and contributors) You need [Node.js](https://nodejs.org/en/) to minify the source Scss and JavaScript files and produce outputs. Download a version suitable for your system, or get it from your Operating System's package manager.

Install all the dependencies (don't use both):

To compile Meshki, the file build.js contains the scripts you need to compile Meshki. There are a couple of commands you can use via npm or yarn so that you don't have to use build.js directly.

To compile and watch for file changes:

Sometimes when you upgrade your NodeJS, node-sass needs to be recompiled for the newer version. To do so, run the following command:

# Why Meshki is Awesome

Meshki is lightweight, stylish and minimal. It styles only raw HTML elements (with a few exceptions) and provides a responsive grid with a fresh-looking interface.

Latest version of these browsers are implied:

The above list is non-exhaustive. Meshki works fine with almost all older versions of the above browsers, though IE certainly has large degradation prior to IE 9, and you are advised to always keep your browser up-to-date.

Not any production-obstructing issues are currently present. For all known issues and project roadmap, see CHANGELOG.

Meshki has been developed mainly on PC, using VSCode and its surrounding tools.

All parts of Meshki are free to use under the permissive Apache-2.0 License.

All other non-Meshki codes have their own respective licenses. Check out their repositories for more information. The website of Meshki uses:

Meshki was originally started by Mohammadreza Hajianpour as a fork of Skeleton. Meshki has come a long way since then and has experienced a total overhaul, including porting the codebase from CSS to Scss. Skeleton was created by Dave Gamache.


Thanks to all contributors and supporters of Meshki, you are AWESOME.