Translates a plain text description of a relational database schema to a graphical entity-relationship diagram.

This utility takes a plain text description of entities, their attributes and the relationships between entities and produces a visual diagram modeling the description. The visualization is produced by using Dot with GraphViz. There are limited options for specifying color and font information. Also, erd can output graphs in a variety of formats, including but not limited to: pdf, svg, eps, png, jpg, plain text and dot.

Here's an example of the output produced by erd (click on it for a larger PDF version):

The corresponding er file is in the examples directory.

erd requires GraphViz, and one of:

All of these are available for Windows, Mac and Linux.

An example command to use erd in a docker container, once this repository is successfully cloned.

Install the Stack build tool, and build from source:

stack install will put the binary into Stack's standard binary installation path. Unless you've overridden it, that's ~/.local/bin on Unix and OS X, %APPDATA%\local\bin on Windows.

NB OSX users: for text formatting of keys (bold and italics) you may need to reinstall graphviz with pango support:

The issue 1636 explains what needs to be performed in details to find out whether pango support is enabled and how to make it happen in case it wasn't.

erd is on hackage, so you can install it with cabal (which is included with the Haskell platform):

Alternatively, you can clone this repository and build from source:

In case one wishes to have a statically linked erd as a result, this is possible to have by executing build-static_by-nix.sh: which requires the nix package manager to be installed on the building machine. NixOS itself is not a requirement.

Before describing the ER file, let's try making an ER diagram from a small example:

The PDF should now contain a graph that looks like this: 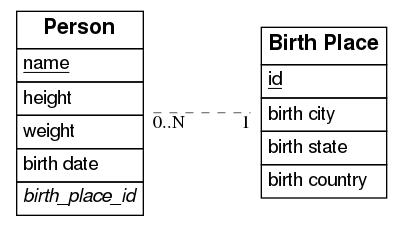 erd may be invoked using the -c or --config argument

The configuration file in commented sections do contain the supported formatting options, so you can use one of the listed ones.

The default content of the configuration file would be only shown when ~/.erd.yaml does not exist.

The er format allows one to describe a relational schema in terms of its entities (tables), attributes (columns) and relationships between entities (0 or 1, exactly 1, 0 or more and 1 or more).

Entities are declared inside [ and ]. For example, this declares the entity Person with no attributes:

Attributes for an entity are then listed after its corresponding entity's declaration. Each attribute should be on its own line. The following adds the name and height attributes to the Person entity:

Entity names and attributes may contain spaces and mostly any character, except ASCII control characters like carriage return and line feed, if quoted with backticks, simple quotes or double quotes:

An attribute may be both a primary key and a foreign key by prefixing the name with a * and a + in any order. Note that primary keys are underlined while foreign keys are italicized.

So for example, the following defines a relationship between Person and Birth Place that reads "every person has exactly one birth place":

And here's another example that can be read as, "every platinum album has one or more artists, but not every artist has a platinum album":

The er format also has limited support for customizing the appearance of your ER diagram. For example, the following will show the entity with a background color of #ececfc and a font size of 20:

Alternatively, you can specify the background color of every entity with a special directive at the top of the file:

Note that directives must come before anything else in an ER file.

Here's an example depicting the first schema shown at the top of this README (note that this is auto-generated by nfldb-write-erd):

erd only exposes a subset of formatting options made available by GraphViz. I'm not entirely opposed to expanding this list if there's a compelling reason to do so, but I'd prefer to keep it small and simple.

Note that not all options are applicable on all items. For example, a title cannot have a background color (it will just be ignored by GraphViz).

Colors can be specified in hexadecimal notation prefixed with a #, e.g., #3366ff or they may be written as their English names.

Formatting options are always specified as key-value pairs in curly braces, where the opening curly brace starts on the same line as the entity/attribute/relationship/directive. The option name precedes a colon and the option value comes after the colon in double quotes (even for integer values). The value is then proceded by either a comma or an ending curly brace. Also note that trailing commas are allowed and that options may be specified over more than one line. For example, the following is a valid er file:

I don't intend for erd to have a large feature set with a lot of options for customizing the appearance of ER diagrams. erd should produce diagrams that are "good enough" from simple plain text descriptions without a lot of complexity. erd will implicitly trust GraphViz to "do the right thing" without a lot of fiddling with its options.

If you have more exotic needs, then I suggest that either erd is not the right tool, or you could use erd to output an er file as a dot file. You can then customize it further manually or using some other tool.

You can output a dot file using the --fmt option or by simply using it as a file extension:

Surprisingly, the only other software I'm aware of that translates a plain text description of a relational schema to a graphical visualization is erwiz. The project appears to be abandoned.

If you've used erwiz before, you'll notice that the format of the er file is inspired by it. The er format is a bit more lightweight, but its general structure is similar.

Translates a plain text description of a relational database schema to a graphical entity-relationship diagram.