FunGAP is freely available for academic use. For the commerical use or licensing of FunGAP, please contact In-Geol Choi (igchoi (at) korea.ac.kr). Please, cite the following reference

FunGAP performs gene prediction on given genome assembly and RNA-seq reads. See INSTALL.md and USAGE.md for installation and usage instruction, or you can go to wiki tab for the same. 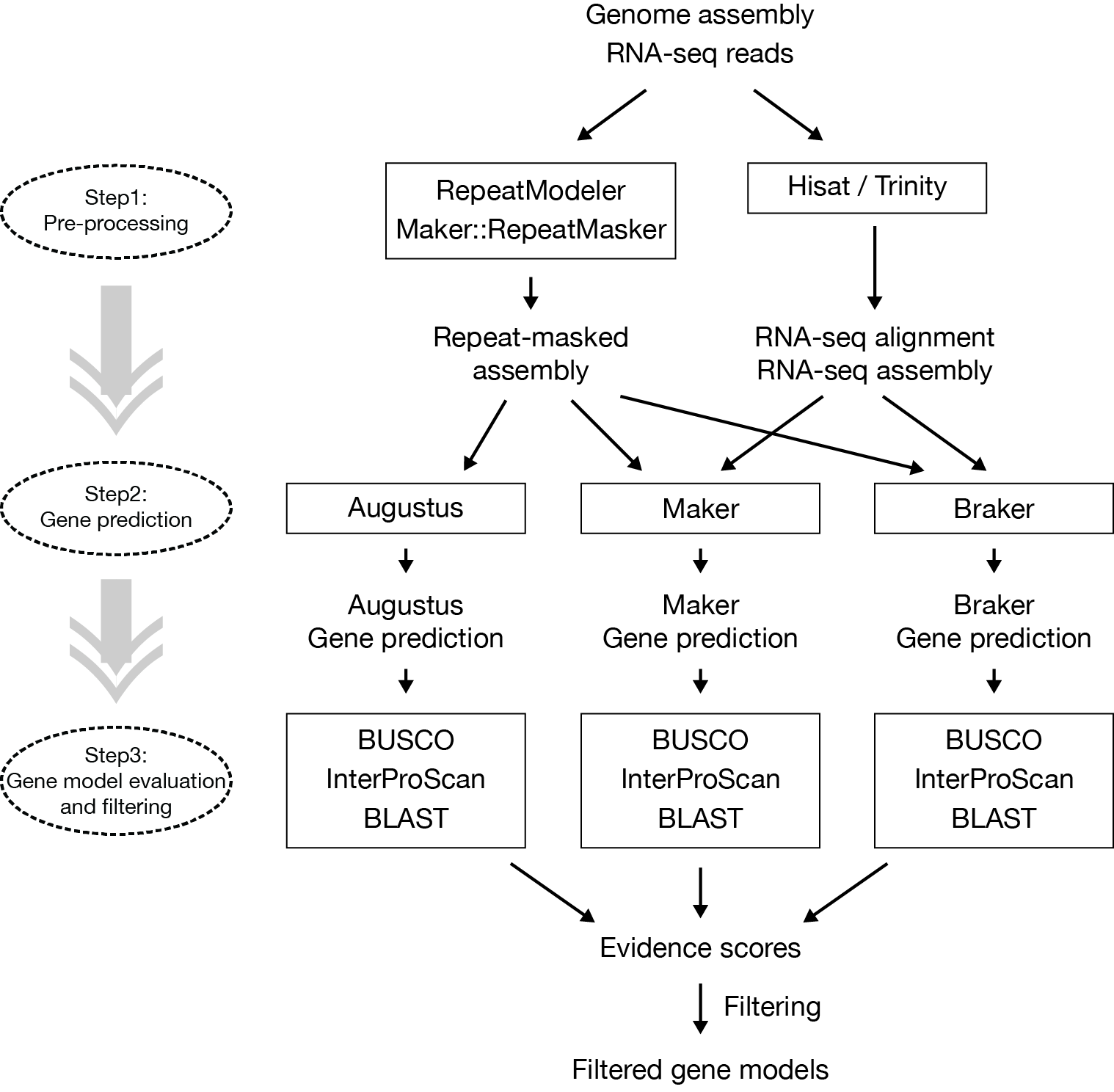 Repeat masking is a crucial step in eukaryotic gene prediction because genomic regions, such as transposon repeats, often make false alignments and interfere with gene prediction. FunGAP employs a repeat masking procedure embedded in the Maker pipeline along with a genome-specific repeat library built by RepeatModeler (http://www.repeatmasker.org/RepeatModeler.html).

User-provided mRNA reads are assembled by the Trinity program. A BAM-format file for genome-guided assembly is generated by a Hisat2 read aligner and Samtools format converter (SAM file to sorted BAM file). An optional parameter --jaccard_clip in Trinity is used for fungal transcript assembly because high gene density leads to UTR overlap in the assembly. This option helps avoid fusion of neighbor transcripts. The maximum intron length is set to 2000 bp with the --max-intronlen option in Hisat2.

FunGAP uses three gene prediction tools: Augustus, Braker, and Maker. The outcomes of predictions are stored in GFF3 and FASTA files for the next set of evidence score calculations.

FunGAP runs Augustus with the augustus_species parameter specified by a user. The option --softmasking is turned on as repeat-masking generates soft-masked assembly. To allow overlapping CDS predictions, FunGAP turns on the --singlestrand option. The output is GFF3, and translated protein sequences are generated in FASTA by a simple parsing script.

Braker performs unsupervised RNA sequencing-based genome annotation using GeneMark-ET and Augustus. The option --softmasking is turned on as repeat-masking generates soft-masked assembly. The input file for Braker is the mRNA reads alignment formatted in a BAM file produced in the preprocessing step.

Sequence similarity with genes in phylogenetically close genomes can be an evidence for predicted genes being actual genes. Users provide the proteome of phylogenetically related organisms with the --sister_proteome argument. For convenience, FunGAP provides a script, download_sister_orgs.py, which downloads protein sequences from NCBI for a given taxon. To reduce computing time, FunGAP integrates the gene models from three gene predictions, and removes identical gene models to make nonredundant gene models.

Pfam provides a database of manually curated protein families. We assume that gene models annotated with a Pfam domain are more likely to be an actual gene. Evidence scores for Pfam are directly provided by the hmmer3-match score in the XML output of InterProScan (-f XML option). For multiple domains in one gene model, the sum of the scores is used.

Three bit scores gained from the above four sources are summed to provide evidence scores for each gene model. The equation of this scoring function is as follows:

In the filtration process, FunGAP finds “gene blocks” defined as a set of gene models that overlap with at least one base pair. FunGAP gets all combinations of gene models in a gene block and calculates the sum of the evidence scores. Gene models in the block with the highest evidence score are selected as final genes of that region. Short coding sequence overlap (less than 10% of coding sequence length) is allowed. 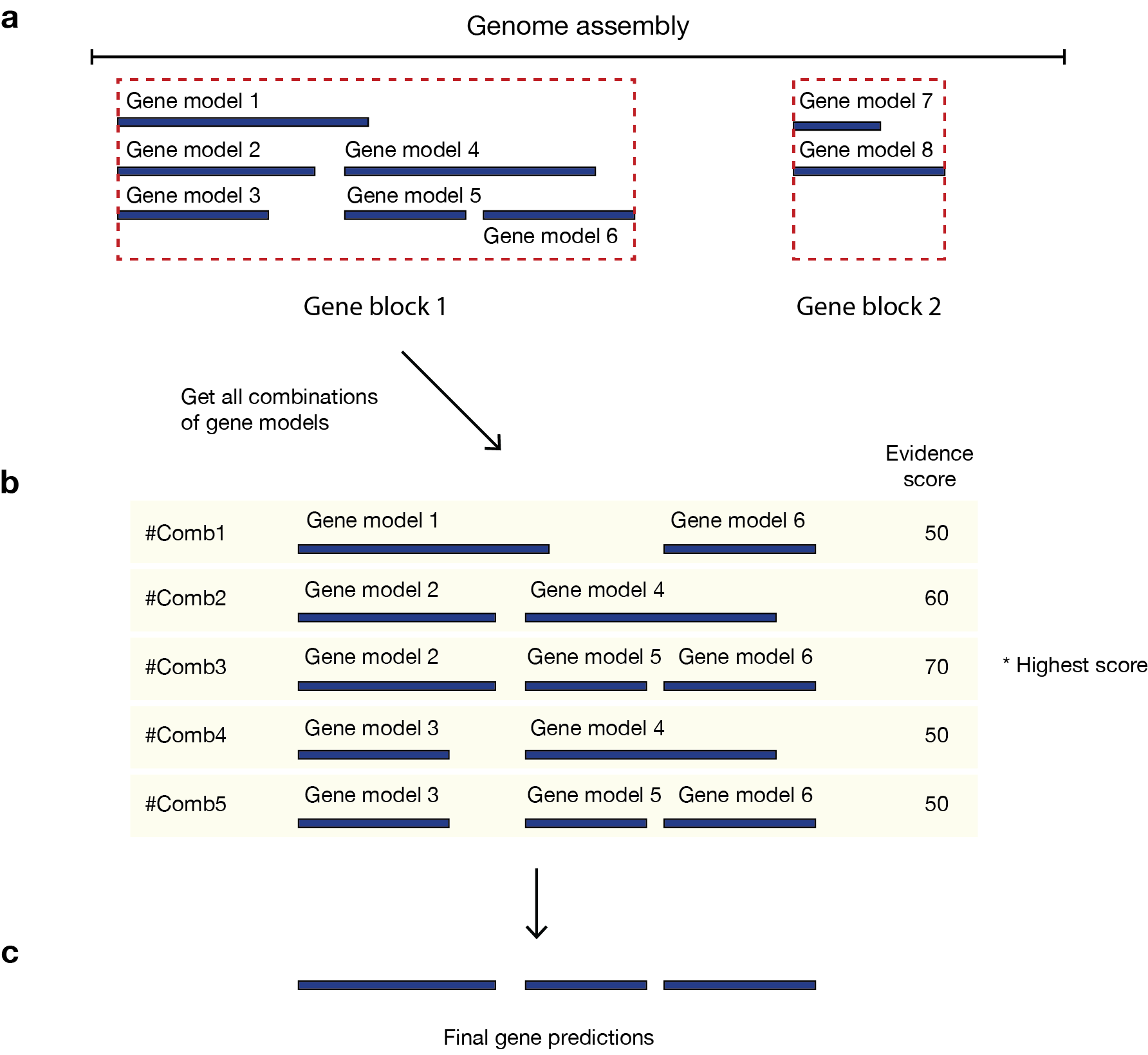 If you have any problem to install or run, please don't hesistate to contact us. We will help you as much as we can. Any input from users will help to build more robust pipeline.