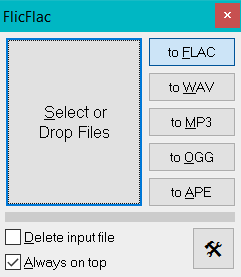 This is a simple utility for converting WAV, FLAC, MP3, APE, OGG, M4A and AAC files to any of the other formats (except M4A and AAC that are only supported as input format).

It uses these external command line encoders/decoders (included in the package):

If you redistribute this package please refer to the license of these encoders.

On the first run, FlicFlac will create a small INI file for you to do some minor configurations if needed, and will also save the five needed converters into the windows temp directory (flac.exe, lame.exe, oggenc.exe, oggdec.exe and faad.exe).

This code is released under the MIT license. Note that FlicFlac uses external codecs for encoding audio file, please refer to their respective license.