All the tilemaps are rendered to a canvas and saved as png, it's necessary only one draw call to draw the entire tile map, each tilemap have 360 tiles. The tilemap is only rendered if is on screen, no more than 2 tilemaps are drawn each frame.

Each tilemap have a reference to 3 enemies, and these enemies are rendered when its tilemap is drawn, no more than 6 enemies are drawn (and updated) each frame.

Player is drawn all the time. Bullets are drawn only when the player or enemies shoot them!

I'm using sat-js to do collisions detection and collisions response. It's not all the big (i removed some unecessary stuff too) and works pretty well. I though it would be a problem for the garbage collecto, but i magened to use one single object to check the tilemap collisions against all the others objects.

Each collidible object have a shape property with a instance of SAT.box. Even the objects that are drawn as circles.

I'm using PathFinding.js, i removed what i don't need and made some byte saving optimizations. This could be a problem for the garbage collector, so i made a system so the pathfinder map grid is changed in real time as the player progress. It's a single grid with 720 tiles that is updated when necessary. This was a bit of a challenge and i'm really happy it works great!

The maps are pre made using the tiled editor and placed in the right place as the player progress.

Didn't have time to add 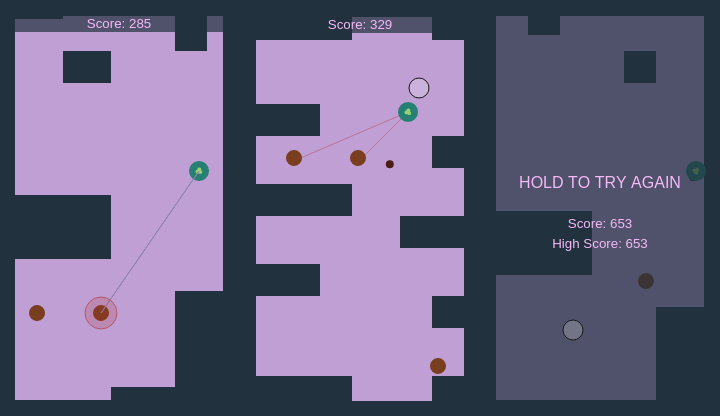