PyDvi is a Python library to read and process DVI (DeVice Independent) files, the native output of LaTeX. The library provides a DVI machine as a base class which can be extended by the user and plugged to a TeX daemon in order to render contents on-the-fly. Also the source code provides a DVI viewer featuring an hardware accelerated rendering o…

The latest documentation build from the git repository is available at readthedocs.org 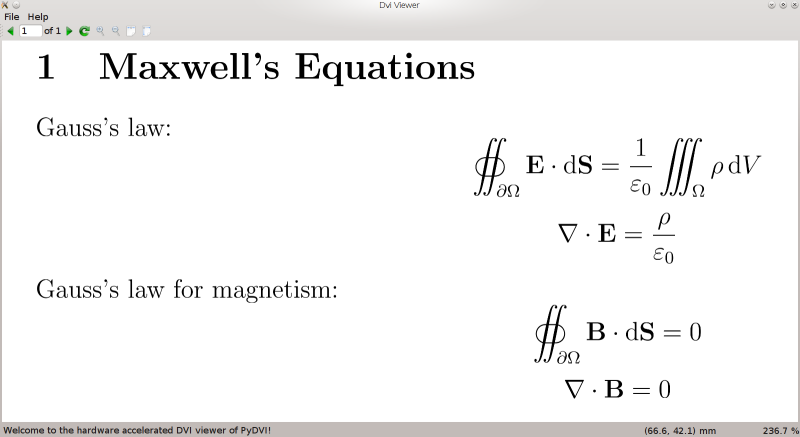 Basically a DVI file describes the layout of a page by a list of opcodes that interact with a register machine to update the position on the page, to load fonts and to paint glyphs and rules. In short it contains the glyphs and their positions on the page. Since TeX was designed to layout the series of books The Art of Computer Programming at the beginning of the eighties, it focuses on texts and mathematical expressions. Thus DVI is much simpler than Postscript or its successor PDF which are designed for graphics. However we can extend the capabilities of DVI using the special opcode which can contain any text like Postscript snippets.

A DVI stream can come from a file or a TeX daemon in order to render TeX inputs on-the-fly.

The DVI parser of PyDvi builds a program from a DVI stream that could be later processed by the provided DVI machine which is designed to be subclassed by the user.

The source code includes an experimental DVI viewer as exemple which uses the OpenGL API for the rendering and thus feature an hardware accelerated rendering. PyDvi and the viewer can be used as a platform to experiment complex text rendering on GPU.

The source code includes also a clone of the dvipng tool to render DVI to PNG image. This tool is mainly intended to check the compliance of PyDvi by image comparison.

PyDvi can be used for several purpose, we will review them in the followings:

TeX is a major and historical typesetting program. PyDvi can serve to read and process its output using Python. The user can be a curious pearson who want to lean TeX or somebody interested by TeX postprocessing.

TeX is one of the oldest computer program still in activity. The reason is quite simple, these algorithms do the right job, its ecosystem is rich and its code is not so simple. Thus nobody succeeds to reimplement it up to now, excepted its mathematical layout algorithms by the MathJax Javascript library which is intended to bring Mathematical layout to web browser. Before the delivery of Mathjax, the only solution to render properly mathematical content was to generate an image using a program like dvipng. It is what does the engine of Wikipedia behind the scene. Usually these programs like Asymptote or Circuit_macros generate the graphics as a PDF document and then include this document in a LaTeX document which contains the labels placed at absolute positions in the page. With PyDvi we can try another approach which consists to send TeX content to a daemon and get back the glyphs and their positions. Matplotlib uses this approach to render LaTeX labels.

The installation of PyDvi by itself is quite simple. However it will be easier to get the dependencies on a Linux desktop.

The DVI to PNG tool requires these additional dependencies:

Also it is recommanded to have these Python modules:

For development, you will need in addition:

PyDvi is made available on the PyPI repository at https://pypi.python.org/pypi/PyDVI

Run this command to install the last release:

To clone the Git repository, run this command in a terminal:

Then to build and install PyDvi run these commands:

PyDvi is a Python library to read and process DVI (DeVice Independent) files, the native output of LaTeX. The library provides a DVI machine as a base class which can be extended by the user and plugged to a TeX daemon in order to render contents on-the-fly. Also the source code provides a DVI viewer featuring an hardware accelerated rendering o…