forked from sonyxperiadev/Folding-home
No description, website, or topics provided.
Find file
This branch is even with sonyxperiadev:master.
Pull request Compare

Folding@Home is a project that aims to harness the spare computing power of mobile devices to help with computing-intensive research.

The project has native parts (compiled with NDK for armv7) but the libraries are bundled with the source code, so it is normally not necessary to install the NDK to run Folding@Home from Android Studio.

You can see all the build tasks by running:

The Android app creates a Service which runs a Thread that executes the node process and responds its events.

This Activity represents the main point of interaction between the user and the Folding@Home app. It handles user input (Ex: Enable/Disable Folding@Home) and handle the information presented to the user (Ex: Conditions that must be met to keep Folding@Home executing, current contribution information).

We don’t want to stop our contribution when the user leaves the app, that’s where the ComputeService enters. The ComputeService is responsible to create the ComputeEnvironment which runs the Folding process in a separate thread while storing and processing all the necessary data from the current execution.

The ComputeEnvironment is responsible to execute the Node.js process. All communication between the Android App and the Node process happens here.

This service encapsulates the native part of the client indirectly, because it spawns the Node.js subprocess, and communicates with it.

The following native components are part of the software:

Currently, the native components have been compiled to the target armv7 (ARM 32 bits). Ideally, the targets Intel and ARM 64-bit should be supported as well. They are not currently supported because compiling FFTW in armv8 needs an update to 3.3.x, that would cost another license. If Folding@Home is made open-source in the future, in a GPL-compatible way, the GPL version of FFTW could be used instead.

Native components are build using the build scripts. Following the steps below.

This class is responsible to watch the necessary conditions to run Folding@Home. They are: Battery level, Wi-Fi state, Charging state, Play/Pause switch. When something changes the ConditionsHandler will inform the Service/UI what happened via EventBus.

The source code, and the currently published version, make use of the GGS and its APIs.

The GGS is an ancilliary component employed to engage users, it is not a primary component, and the distributed processing does not depend on it.

It is noteworthy that connection with GGS has a high degree of integration with Google Play. The publisher of this software must be able to access the Developer Console (to get the API Key, add/edit game achievements etc.). The publisher must also be able to sign the APK with the identity certificate associated with the app. Otherwise, GGS features will not function.

For example, the current application ID of this app is com.sonymobile.androidapp.grid. A third-party developer can build and run the software, but GGS features will not work because the developer won’t be able to sign the APK, because he does not have the Sony Mobile’s identity certificate. Either the developer: 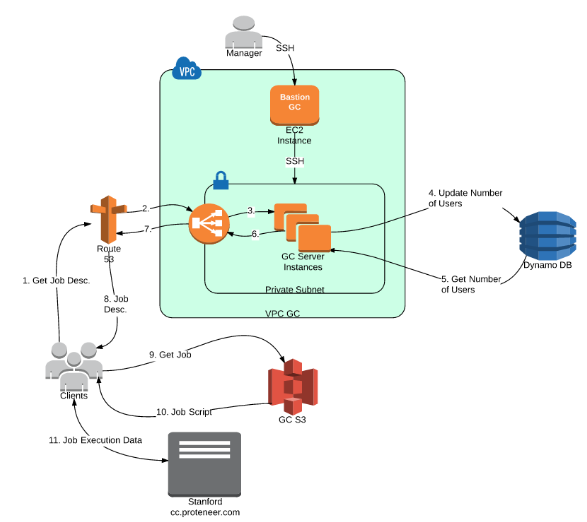 This is an implementation of the GComp architecture. It's composed of three parts:

These three components form a powerful architecture for management of execution tasks that are to be handled in a distributed cloud environment. Below follows an introduction to these components and an overview of how jobs are created and sent out to clients.

The project management server interacts with the job server to upload job requests to a queue. In turn, the job server is contacted by clients who pop elements from the queue and execute the request by downloading a script from the supplied server in the request. The script is passed via stdin to a Node.js instance.

Four certificate sets are used in the project management server to communicate with the job server and the client:

Three certificates are utilized from within the client:

The job queue server is contacted by project management servers to receive jobs, then in turn by clients to execute jobs.

Three certificates are utilized from within the job server:

Job scripts are NodeJS scripts that will be downloaded from the project management server on an HTTPS URI specified by the job request.

To start a job, a JSON object is sent via HTTPS POST to the server as plaintext:

pmserver-cert.pem and pmserver-key.pem are used in the request to authorize the connection. Similarly, jobserver-cert.pem is used as a CA to ensure the job server is secure.

The server returns a timeout string specifying in seconds when it believes the jobs will have had time to start. If this timeout is passed, the job is to be retried.

When a job starts, it will send a HTTPS GET request to the supplied server, port, and path, using the client key and cert to authorize itself. jobserver-pmca-cert.pem is used as a CA to ensure the project management server is secure. The request must return a valid Node.js script that is then passed over stdin to a new Node.js instance.

When a job ends, it may if necessary contact the project management server to supply any results. If a job is stopped by the client, it may be given a chance to finish the current job. If so, it sends a SIGTERM to the job and gives it a [TBD] second timeout to finish any current task. This SIGTERM may be trapped in the job to upload any intermediate results to the project management server before ending the task. If the timeout passes, a SIGKILL is sent to the process to force the current task to end.