(Deprecated) A driver that allows users to use the Xbox One controller on the Mac OS X operating system.

THIS DRIVER IS DEPRECATED

PLEASE USE THIS DRIVER INSTEAD

MAKE SURE TO UNINSTALL THIS DRIVER USING THE UNINSTALL.COMMAND FILE FOUND IN THE DOWNLOAD OF THIS DRIVER

NOTE: If you want to use the driver without access to the source code, check the releases page.

I don't recommend leaving batteries in the controller while using it wired for extended periods of time. This could potentially cause wear on the batteries that is best avoided.

There is an uninstaller included in the download. If you do not have the original version of your driver, download a new one. When you open the downloaded file, the uninstall.command will be located in the top left of the new window that opens. Simply run it, and it will take care of the rest!

Check and make sure your controller shows up here:

My controller is in that menu, but has a different Product and or Vendor ID

If it is a Microsoft controller, post your Product and Vendor IDs in an issue, and I'll look into it. If you are using a third party controller, uninstall my driver and use this driver instead.

My controller is in that menu, but it still doesn't work.

First, make sure you have the latest version of the driver. If you are: check Console.app for any sort of errors that the driver may mention, and make sure to post any of it in an issue.

I don't see an object called Controller in that menu

This is likely caused by using a "charge" micro USB cable. You must use a "data" cable to use an Xbox One controller. Try a different wire until you see Controller in this menu.

OS X Yosemite introduced a new security feature requiring all kernel extensions to be signed by a certificate with a new custom extension (OID 1.2.840.113635.100.6.1.18) that designates it as a kext-signing certificate. On reboot, unsigned kexts or those with invalid signatures will be left unloaded and the system will alert the user via a warning. 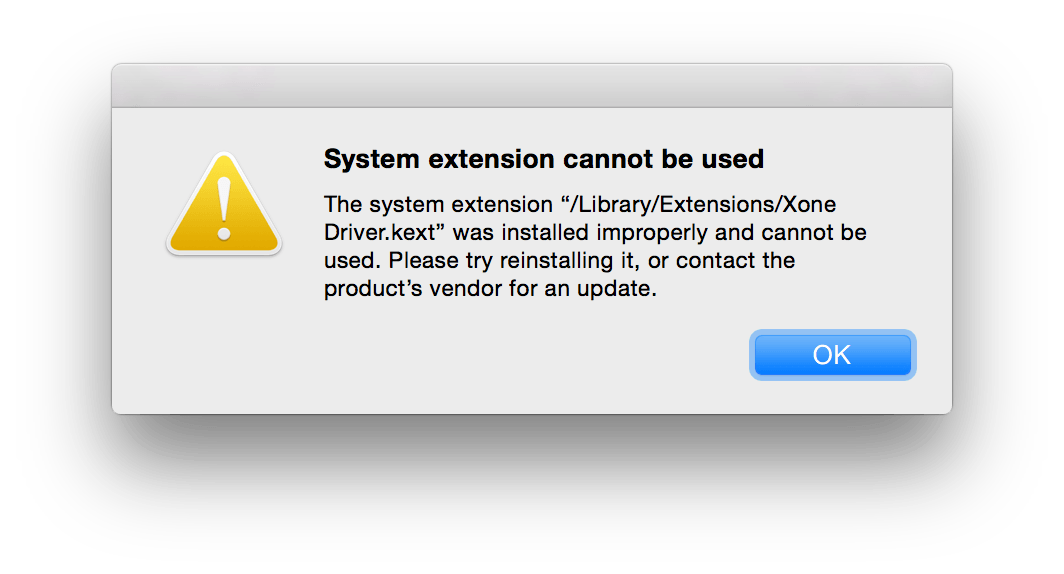 Those hoping to build and run the kext from source, have a couple of options.

A kext developer mode can be enabled to allow invalid signatures. This is a global setting and will disable kext signature checking for the entire system! To enable the mode, run the following and reboot:

To revert to the system default setting of disallowing invalid kext signatures, run the following and reboot:

If enrolled in the Mac Developer Program, one can request the special certificate on the Apple Developer page Requesting a Developer ID Certificate for Signing Kexts - it is worth noting that the certificate is intended for those needing to sign a kext that is commercially shipped or broadly distributed through a large organization.

Kernel extensions are loaded on demand and if the controller does not light up when attached, one could check if the kext is loaded - the kext's status should be displayed if loaded via:

Though generally unnecessary, the kext can be manually loaded as well:

OLDBIND Button Layout to use with Unity

Default layout for the controller is identical to a 360 controller.

(Deprecated) A driver that allows users to use the Xbox One controller on the Mac OS X operating system.