With modern lightweight compression algorithms running at gigabytes per second per core, it's practically a no-brainer to apply them to filesystems to make better use of storage and IO.

Half-recognising this, Windows 10 ships with a reworked compression system that, while fast and effective, is only exposed to users via a command-line tool — compact.exe.

Compactor is here to plug that gap, with a simple GUI utility anyone can use. 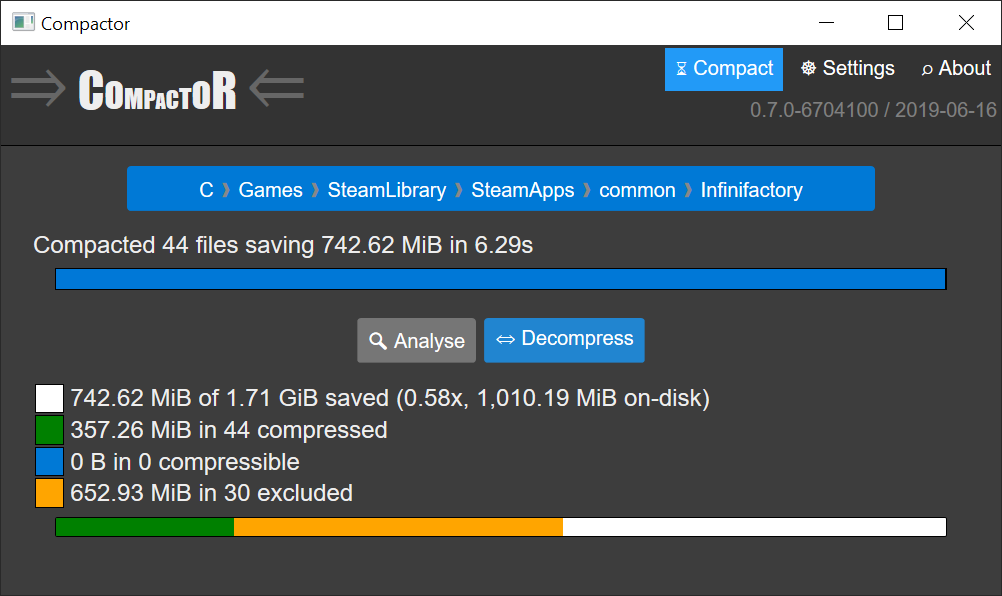 Downloads are available from the Github Releases page under Assets, or you can use these direct links:

If you get "Windows protected your PC" trying to run it, it's just SmartScreen upset the binaries aren't (yet) signed. Click "More info" and "Run anyway" if you judge things to be above-board.

Note this is beta software and comes with no warranty.

Compactor's directory analysis updates as it goes. You too can experience the satisfaction of watching the disk-space used counter tick down with each file compressed.

All operations can be paused and interrupted safely at any time. Compactor will finish off what it's doing and stop, or restart where it left off.

Compactor performs a statistical compressibility check on larger files before passing them off to Windows for compaction. A large incompressible file can be skipped in less than a second instead of tying up your disk for minutes for zero benefit.

Using advanced condition-based AI logic, Compactor can skip over files that have been previously found to be incompressible, making re-running Compactor on a previously compressed folder much quicker.

(Yes, it's an if statement and a trivial hash database, hush) 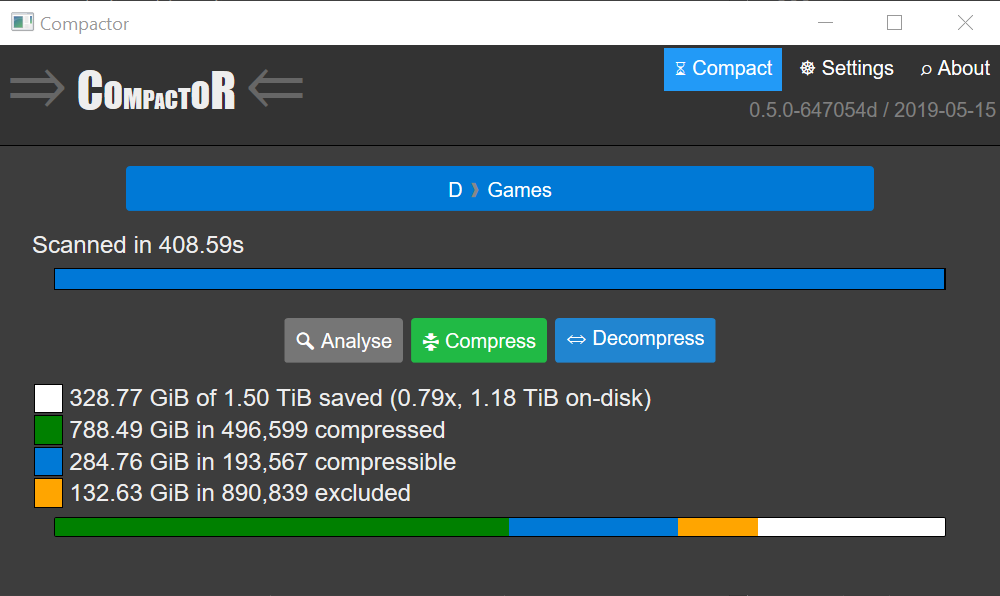 Compactor has received only limited testing. I've used it extensively on my desktop and laptop without a problem, it's saved me hundreds of gigabytes of disk space. Hopefully it will do the same for you.

Make backups. Report bugs. Be nice. You are reminded:

Compactor currently has no mechanism to elevate its privileges using UAC for protected files. If you're using a limited account you might need to run it as an Administrator, or a user with similar privileges.

Be careful what you compress. System files should be skipped automatically, and the Windows folder should be in the list of default exclusions (if you want to compact Windows, check out its CompactOS feature), but you almost certainly don't want to blindly run this across your entire C:\ drive.

Compaction is designed for files that rarely change — any modifications result in the file being uncompressed in its entirety. In fact, simply opening a file in write mode will hang until the file is uncompressed, even if no changes are made.

This generally doesn't matter much for application folders, but it's not great for databases, logs, virtual machine images, and various other things that hopefully mostly live elsewhere.

If a game uses large files and in-place binary patching for updates, it might be worth adding to the exclusions list.

A totally-not-cherry-picked sample of compression results with the default settings:

A more comprehensive database of results is maintained by the CompactGUI project.

Are you aware of any others? Do let me know.

Compactor is primarily written in Rust. The front-end is basically an embedded website driven by the web-view crate. It does not depend on any remote resources or open any ports.

Under the hood it uses DeviceIoControl with FSCTL_SET_EXTERNAL_BACKING and FSCTL_DELETE_EXTERNAL_BACKING, and a few functions from WofApi (Windows Overlay Filesystem). This is, of course, in part thanks to the winapi crate. Eventually I hope to get around to finishing off some of my bindings and contributing them back.

Compresstimation uses a simple linear sampling algorithm, passing blocks through LZ4 level 1 as a compressibility check and averaging across the entire file. The code is available on Github.

The incompressible-files database is simply an append-only list of SipHash128 path hashes. It should be safe to share between multiple instances if you want to compress different drives at the same time. It lives in %APPDATA%\Local\Freaky\Compactor.

Compactor is written by Thomas Hurst, a nerdy, aloof weirdo from the north-east of England, and a programmer for about 25 years.

He mostly works with FreeBSD and focuses on Unix platforms, but uses Windows because he plays games instead of having a social life.

You can find him on Twitter at @blaagh, or bug him on IRC as Freaky on FreeNode.