I was in the computational design team while designing the ICD/ITKE Research Pavilion 2015-16 and was mainly in charge of developing computational tools.

Here is the demonstration video to show the geometrical implementation. One of the input parameters from the plugin is a mesh surface, and the output parameters are all tree data structure thus some double-layer light weight structure as well as some planar plates can be generated (Planar plate wasn’t realized due to the decision making and scheduling during the development). All the geometries are labeled in the right sequence so they can be fabricated directly: 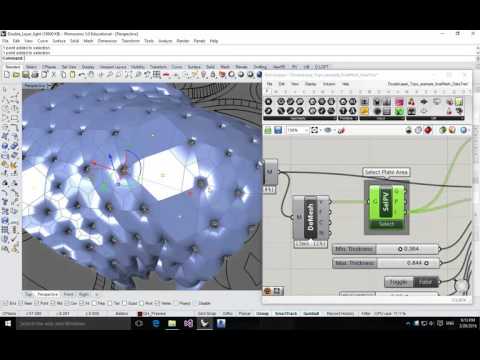 The demo video above shows the workflow from mesh to pavilion geometry by using our customised Grasshopper component, and we can select vertices from the mesh by using Selectable Preview plugin. Finally, the customised component can generate plate and double layer topology seamlessly.

Some part of the code is on my GitHub and the code project was developed together with Julian Wengzinek, Thu Nguyen-Phuoc and Long Nguyen.

The pavilion project video from the design development to the fabrication process can be seen in the video from ICD/ITKE here: