There's an experimental patch for windows in this PR

We've purposefully kept editor configuration files out of this repo in order to keep it as simple and environment agnostic as possible. However, we recommend using the following settings:

Please (do your best to) stick to Google's C++ style guide.

Ki is the integral coefficient is used to help with steady state error. It is the sum of the cross track errors over time.

Kd is the differential coefficient is used in conjunction with the cross track error to help avoid overshooting.

Picking the parameters to successfully make laps around the track was trial and error. I tried high and low values around the same value used in the lessons to start. I watched the car make laps and adjusted to get the best fit visually. The car still jerks side to side and isn't as smooth as a human driver. The PID formula is simple and concise. If I had more time I would of liked to make the turning movements smoother so if a human was actually in the car they wouldn't get sick.

If given more time I would like to plot the correct trajectory and then the one taken then compare the two to figure out if I could improve them further with just the PID equation. One limiting factor is speed. Since I don't take into account the capabilities of the car on the track it is hard to keep the car on the track at speeds over 30. To make movements smoother I think speed would also need to be controlled.

Click the image below to watch the demonstration video 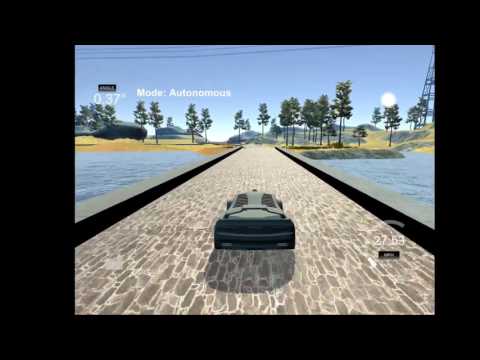