This repository maintains the data storage system of the Human Cell Atlas. We use this Google Drive folder for design docs and meeting notes, and this Zenhub board to track our GitHub work.

The DSS is a replicated data storage system designed for hosting large sets of scientific experimental data on Amazon S3 and Google Storage. The DSS exposes an API for interacting with the data and is built using Chalice, API Gateway and AWS Lambda. The API also implements Step Functions to orchestrate Lambdas for long-running tasks such as large file writes. You can find the API documentation and give it a try here. 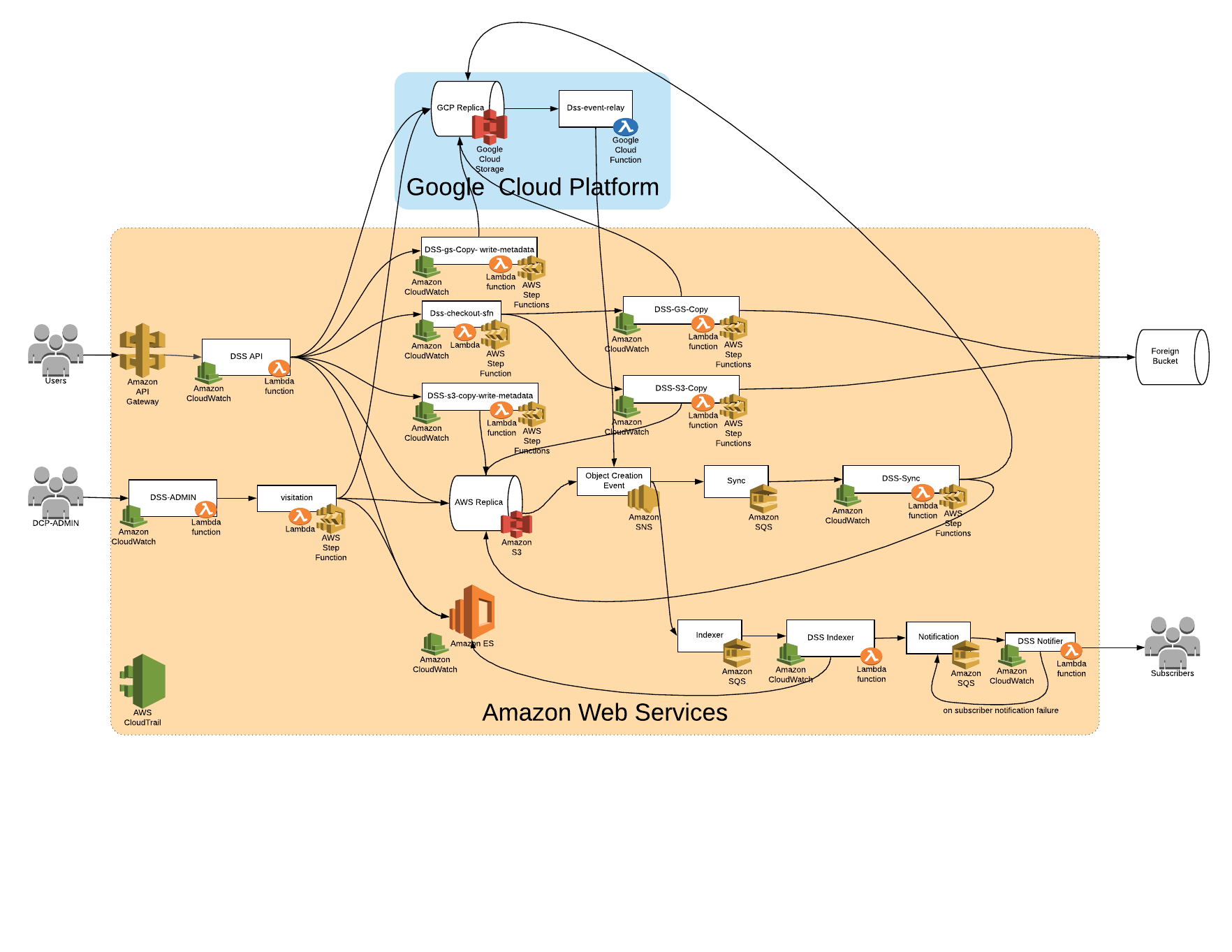 You can use the Swagger Editor to review and edit the API specification. When the API is live, the spec is also available at /v1/swagger.json.

You can find the DSS API documentation for each stage listed below:

In this section, you'll configure and deploy a local API server and your own suite of cloud services to run a development version of the DSS.

Note that privileged access to cloud accounts (AWS, GCP, etc.) is required to deploy the data-store. IF your deployment fails due to access restrictions, please consult your local systems administrators.

Also note that all commands given in this Readme should be run from the root of this repository after sourcing the correct environment (see the Configuration section below). The root directory of the repository is also available in the environment variable $DSS_HOME.

The DSS requires Python 3.6 to run.

Clone the repo and install dependencies:

Also install terraform from Hashicorp from your favourite package manager.

The full list of configurable environment variables and their descriptions are documented here.

The DSS uses the Amazon S3 backend for Terraform-deployed resources. To run deployment, make sure that the requisite bucket exists. The bucket is named after $DSS_TERRAFORM_BACKEND_BUCKET_TEMPLATE, by default org-humancellatlas-{account_id}-terraform with {account_id} substituted with your AWS account ID.

The following environment variables must be set to enable user authentication and authorization.

Also update authorizationUrl in dss/dss-api.yml to point to an authorization endpoint which returns a valid JWT.

Optional: To configure a custom swagger auth before deployment run:

Alternatively, to configure auth for all swagger endpoints, you can run:

Note: Removing auth from endpoints will currently break tests, however adding auth should be fine (make test should run successfully).

Note: The auth config file for deployment can also be set in environment.local with AUTH_CONFIG_FILE.

Some daemons (dss-checkout-sfn for example) use Amazon SES to send emails. You must set DSS_NOTIFICATION_SENDER to your email address and then verify that address using the SES Console enabling SES to send notification emails from it.

Run ./dss-api in the top-level data-store directory to deploy the DSS API on your localhost.

When deploying for the first time, a Google Cloud Platform service account must first be created and credentialed.

Assuming the tests have passed above, the next step is to manually deploy. See the section below for information on CI/CD with Travis if continuous deployment is your goal.

Several components in the DSS deployed separately as daemons, found in $DSS_HOME/daemons. Daemon deployment may incorporate dependent infrastructure, such SQS queues or SNS topics, by placing Terraform files in daemon directory, e.g. $DSS_HOME/daemons/dss-admin/my_queue_defs.tf. This infrastructure is deployed non-interactively, without the usual plan/review Terraform workflow, and should therefore be lightweight in nature. Large infrastructure should be added to $DSS_HOME/infra instead.

Cloud resources have the potential for naming collision in both AWS and GCP, ensure that you rename resources as needed.

Buckets within AWS and GCP need to be available for use by the DSS. Use Terraform to setup these resources:

The AWS Elasticsearch Service is used for metadata indexing. Currently the DSS uses version 5.5 of ElasticSearch. For typical development deployments the t2.small.elasticsearch instance type is sufficient. Use the DSS_ES_ variables to adjust the cluster as needed.

Add allowed IPs for ElasticSearch to the secret manager, use comma separated IPs:

Use Terraform to deploy ES resource:

A certificate matching your domain must be registered with AWS Certificate Manager. Set ACM_CERTIFICATE_IDENTIFIER to the identifier of the certificate, which can be found on the AWS console.

An AWS route53 zone must be available for your domain name and configured in environment.

If successful, you should be able to see the Swagger API documentation at:

CI/CD with Travis CI and GitLab

We use Travis CI for continuous unit testing that does not involve deployed components. A private GitLab instance is used for deployment to the dev environment if unit tests pass, as well as further testing of deployed components, for every commit on the master branch. GitLab testing results are announced on the data-store-eng Slack channel in the HumanCellAtlas workspace. Travis behaviour is defined in .travis.yml, and GitLab behaviour is defined in .gitlab-ci.yml.

Encrypted environment variables give Travis CI the AWS credentials needed to run the tests and deploy the app. Run scripts/authorize_aws_deploy.sh IAM-PRINCIPAL-TYPE IAM-PRINCIPAL-NAME (e.g. authorize_aws_deploy.sh group travis-ci) to give that principal the permissions needed to deploy the app. Because a group policy has a higher size limit (5,120 characters) than a user policy (2,048 characters), it is advisable to apply this to a group and add the principal to that group. Because this is a limited set of permissions, it does not have write access to IAM. To set up the IAM policies for resources in your account that the app will use, run make deploy using privileged account credentials once from your workstation. After this is done, Travis CI will be able to deploy on its own. You must repeat the make deploy step from a privileged account any time you change the IAM policies templates in iam/policy-templates/.

Environment variables provide the AWS credentials needed to relay events originating from supported cloud platforms outside of AWS. Run scripts/create_config_aws_event_relay_user.py to create an AWS IAM user with the appropriate restricted access policy. This script also creates the user access key and stores it in an AWS Secrets Manager store.

Note when executing the script above, ensure that the role/user used within AWS is authorized to perform: iam:CreateUser

Now that you have deployed the data store, the next step is to use the HCA Data Store CLI to upload and download data to the system. See data-store-cli for installation instructions. The client requires you change hca/api_spec.json to point to the correct host, schemes, and, possibly, basePath. Examples of CLI use:

Now that you've uploaded data, the next step is to confirm the indexing is working properly and you can query the indexed metadata.

All tests for the DSS fall into one of two categories:

As such, standalone tests can be expected to pass even if no deployment is configured, and in fact should pass before an initial deployment. For more information on tests, see tests/README.md.

If you need to modify or add a direct runtime dependency declaration, follow the steps below:

If you wish to re-pin all the dependencies, run make refresh_all_requirements. It is advisable to do a full test-deploy-test cycle after this (the test after the deploy is required to test the lambdas).

AWS Xray tracing is used for profiling the performance of deployed lambdas. This can be enabled for chalice/app.py by setting the lambda environment variable DSS_XRAY_TRACE=1. For all other daemons you must also check "Enable active tracking" under "Debugging and error handling" in the AWS Lambda console.