Sign up
Build and run a Hyperledger Fabric network using the Raft consensus protocol. Deploy a five-node ordering service, submit transactions via the Fabcar UI, and test the network by stopping some of the ordering nodes.
Find file

Build and run a smart contract on a Hyperledger Fabric network with the Raft ordering service.

This project demonstrates how to build and submit transactions to a five-node ordering service running on the (crash fault tolerant) Raft consensus protocol. This repo makes use of the Fabcar chaincode and UI (shown in the gif below).

The five-node ordering service is made up of five separate docker containers, as shown below:

After you submit these transactions, you can see the Raft consensus protocol in action by reading the logs from the ordering node containers. For example, the logs from node 1 are shown below. First, we can see that a Heartbeat message was received, thus making node 1 a follower in the present term. Next, you can see the leader is changed to node 5. Lastly, you can see a block is being written to the ledger channel. Next, we will submit a change car owner transaction, and can see that block number 12 is written to the channel once the transaction goes through.

This repo will show you how to build your own Hyperledger Fabric network running a 5-node Raft consensus protocol, and submit transactions through the UI shown in the gifs above. Lastly, this repo will explain the basics behind the Raft protocol.

Given that there are many possible ways that the nodes on a blockchain network may come to agreement (or consensus), and that agreement is essential for a distributed computing network, it is no surprise that the debate over the most efficient consensus algorithm is often heated and even religious. At the heart of consensus algorithms is solving a difficult, popular, distributed computing question: how can we (computers) agree on one result (reach consensus) among a group of computers when we know that the computers are unreliable? Although there is no perfect way to solve this problem, the de-facto standard since 1989 has been the Paxos algorithm. The problem with Paxos, is that it takes Ph.D students years to master, and even the brightest of engineers that try to implement this algorithm in practice have difficulties fully understanding, and thus, implementing their solution.

Enter Raft. Designed as an alternative consensus algorithm to Paxos, Raft is much easier to understand, and is now used in some of the most successful software projects, such as Docker. Since the start of Hyperledger Fabric, consensus has been designed as pluggable, and you the developer get to choose which type of consensus your ordering nodes will use. Raft enables a much easier setup than Kafka, a more decentralized approach because multiple organizations can contribute nodes to the ordering service, and greater crash fault tolerance than Solo, since Solo features a single ordering node. This code pattern will help you understand how to build and deploy a smart contract onto a Hyperledger Fabric network running Raft, and enable you to test the tolerance of the network by stopping and starting some of the ordering nodes.

When the reader has completed this code pattern, they will understand how to: 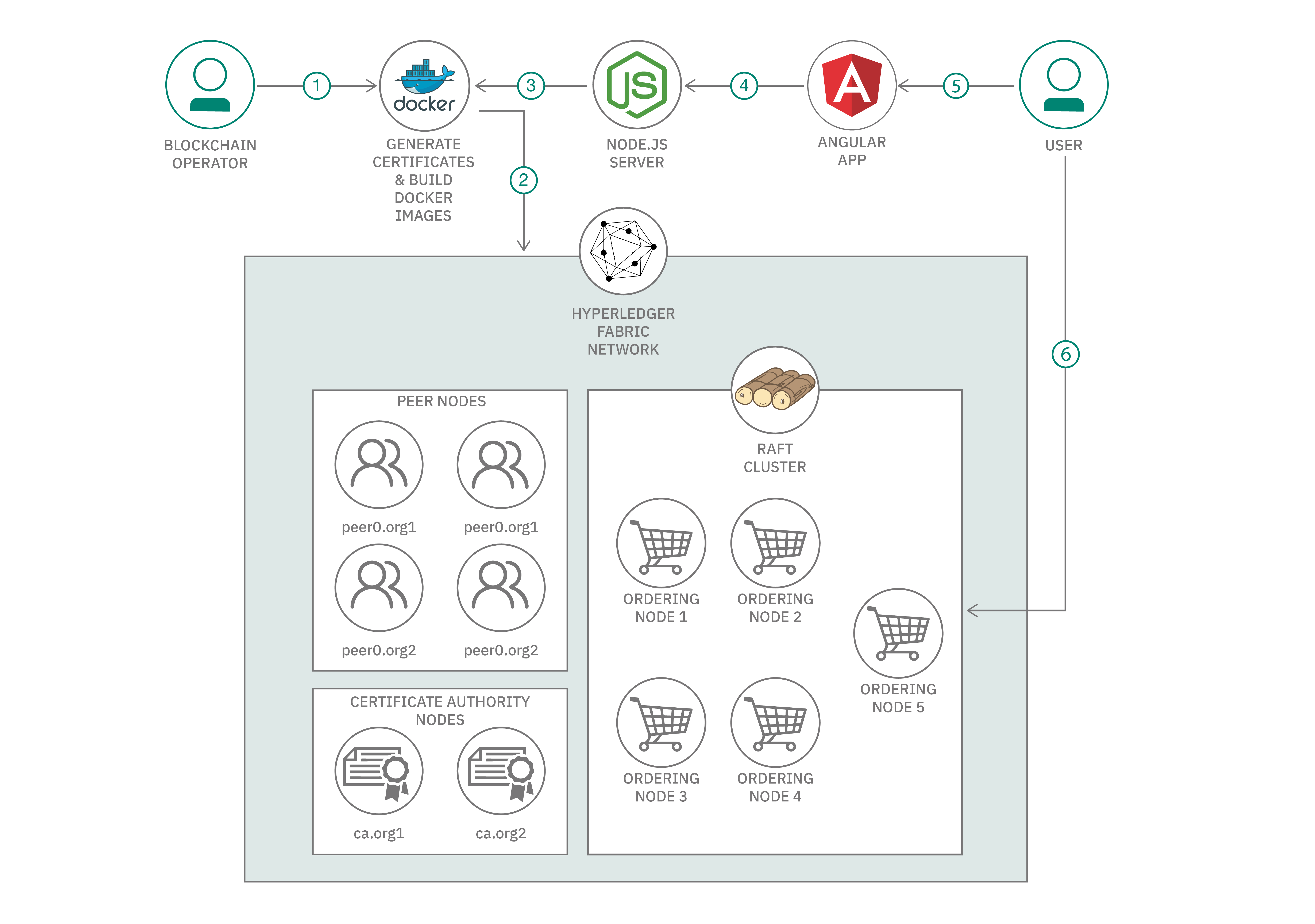 Note: This repo is 78MB. May take some time to clone.

Clone this repo by issuing the following command in Terminal. Next, navigate to the newly cloned folder.

You will need to run the following command if you have other Docker containers running from the IBM-Blockchain VSCode extension, or any other projects that are using the same containers on the same ports. Also, if you ran into an error using these scripts in the past, clean your Docker system with the following commands. Note when asked if you want to continue type in y:

Next, we clean the previous cryptographic certificates on our system is the following command. Note when asked if you want to continue, type in y:

The command below we clear all docker containers on your system. Only use it if you are okay with doing this. I use it every time to ensure that the containers that are needed for the pattern will work properly, but use at your own discretion.

You will see the following:

The last thing we need to do if you ran this app before is clean up our previous credentials from the wallet directory. Go ahead and delete the wallet from the web-app/server directory:

Issue the following command to generate the required certificates and genesis block configuration. When asked for if you want to continue go ahead and type in y.

Next, Start up the Raft network with the following command. This may take a few minutes to execute...

Next, we need to install the dependencies to run the fabcar UI. In a two separate Terminal window, navigate to the client and server directories of the web-app, and run npm install.

Next, we need to add a reference to our private keys for our Org1 and Org2 of our application, so that we can prove to the network that our keys have been generated from a valid certificate authority. In step 1, from the ./byfn.sh generate -o etcdraft command, we created certificates for org1.example.com and org2.example.com which are the organizations that are managing and creating certificates for the peer nodes. These certificates are stored in our crypto-config directory.

Run the following script from the server folder to assign and change the connection.yaml file with the correct private keys for our two organizations.

The script changes the following line. It changes The adminPrivateKey path for Org2 as well.

Next, let's run the enrollAdmin.js script to create an identity from our certificate authority and store that in our wallet, locally in the server directory.

Once the dependencies are installed, in the two separate windows, run the following command to start the Angular app, and the Node.js server.

Next, start the Node.js Express server:

Go ahead and go to localhost:4200 in the browser of your choice to interact with the app. The app should automatically refresh and have cars shown as shown in the picture below:

If all goes well, you should see the following output in your Express server:

To test the network and make sure it is actually crash fault tolerant, we will crash one of the nodes on purpose, and then submit a transaction to the network to make sure the network still works as expected.

First, we get the logs of ordering node 4 with the following command to prove that it is operating as normal:

Next, as shown in the gif below, we will stop node number 4. We will use the following command to do so:

We then submit a createCar transaction to the network, and will see the transaction still goes through since four out of the five (4/5) nodes are still operating. As a result, CAR15 is created. After you have clicked on the createCar button, as shown below, we will check the logs of node number 5, with the following command:

Similarly, we will stop node number 5. Again, since three out of five (3/5) of the nodes are still operating, all will work as expected. As a result, CAR16 is created.

Lastly, when we stop node three, only two out of five nodes are operating (2/5). This means that we do not have a quorum. In this scenario, as shown below, the network is unable to reach consensus, and we are not able to update the network with our transaction.

The logs above show you exactly what is being recorded on the network in terms of who is the leader, the following, who is sending out the heartbeat message, and other important aspects of the consensus mechanism. To learn more about the Raft consensus mechanism, I urge you to see the white paper, along with the other articles that are in the related links section below. To fully learn the intricacies behind the algorithm, you will need to spend a lot of time reading and experimenting.

In this pattern, you learned that you can build a five-node ordering service network using the Build your first network script, and modifying it a little bit. You also learned a some of the basics behind how Raft works - namely, you learned how Raft uses leaders, voting, and timeouts to ensure that data is properly stored and propagated across a network. Finally, you saw that you can check the logs of a Docker container to see all of the Raft consensus details such as when leaders are elected, when blocks are written, and when heartbeat messages are sent. This should give you a good idea on how to implement Raft on your own blockchain use case, and why it is useful in the first place.

If you enjoyed this pattern, please give it a star, since that will help us cater our content in the future to your needs. Thanks :)