TweetPinna is a tweet archiver written in Python that saves tweets to MongoDB.

TweetPinna is a tweet archiver that saves tweets and metadata to MongoDB. It is designed for long-running archival projects (e.g. for academic use) and is based on Tweepy. As of now, TweetPinna is able to archive tweets based on search terms and/or hashtags as well as based on location. There is rudimentary support for archiving specific user's timelines.

TweetPinna, as of 1.0.9, supports Python 3. However, the original TweetPinna, development started in early 2014, was in written in (legacy) Python (2.7x). I'm in the process of hopefully refactoring (and actually moving away from legacy Python) the whole codebase. The project, as it stands right now, works fine, but is fairly messy. There will be (very infrequent) marginal updates to this legacy version.

install.sh is an alternative to steps 4 and 5 and will use the default configuration. The installer will assume python and pip to be your preferred commands. start.shwill run both the archiver and the dashboard in a screen session.

If you plan to run TweetPinna in production, it is advisable to implement the following:

Keep in mind that using the media/image downloader will generate a lot of traffic. Based on a sample of 600 tweets, an average tweet amounts to roughly 6 MB of image data.

If you decide to not download images immediately (media_download_instantly : 0) you can manually download all images by running python TweetPinnaImageDownloader.py config.cfg.

Since Twitter (at least with free API access) does not allow you to track/search for replies directly, TweetPinna tries to archive these via the user's timelines. Tracking replies, due to these restrictions, is time-sensitive. Thus, you should set up a job running TweetPinnaReplies.py config.cfg <limit> with a limit that resembles how many tweets have been tracked per job execution. Hence, if you are tracking approximately 500 tweets per hour, you should run this at least hourly with a limit of 500.

Also, keep in mind that this method is far from perfect and especially does not account for the fact that replies can be added later. Therefore, in the example above, you would only track replies which were made fairly immediately.

If persistent logging/tracking is paramount, restart.sh can be called from time to time (cronjob) in order to restart both TweetPinna and the MongoDB service in case they are down for some reason. While this is certainly not the 'cleanest' solution, it works well in practice.

If the database (MongoDB) becomes unavailable for any reason, TweetPinna continues to collect tweets. Once the connection is reestablished, the tweet-buffer is dumped into the database. While this behaviour can be memory heavy, it ensures that no (less) tweets are lost. If you want to disable this function set tweet_buffer : 0.

If there is no dashboard username set, the dashboard will be unprotected. 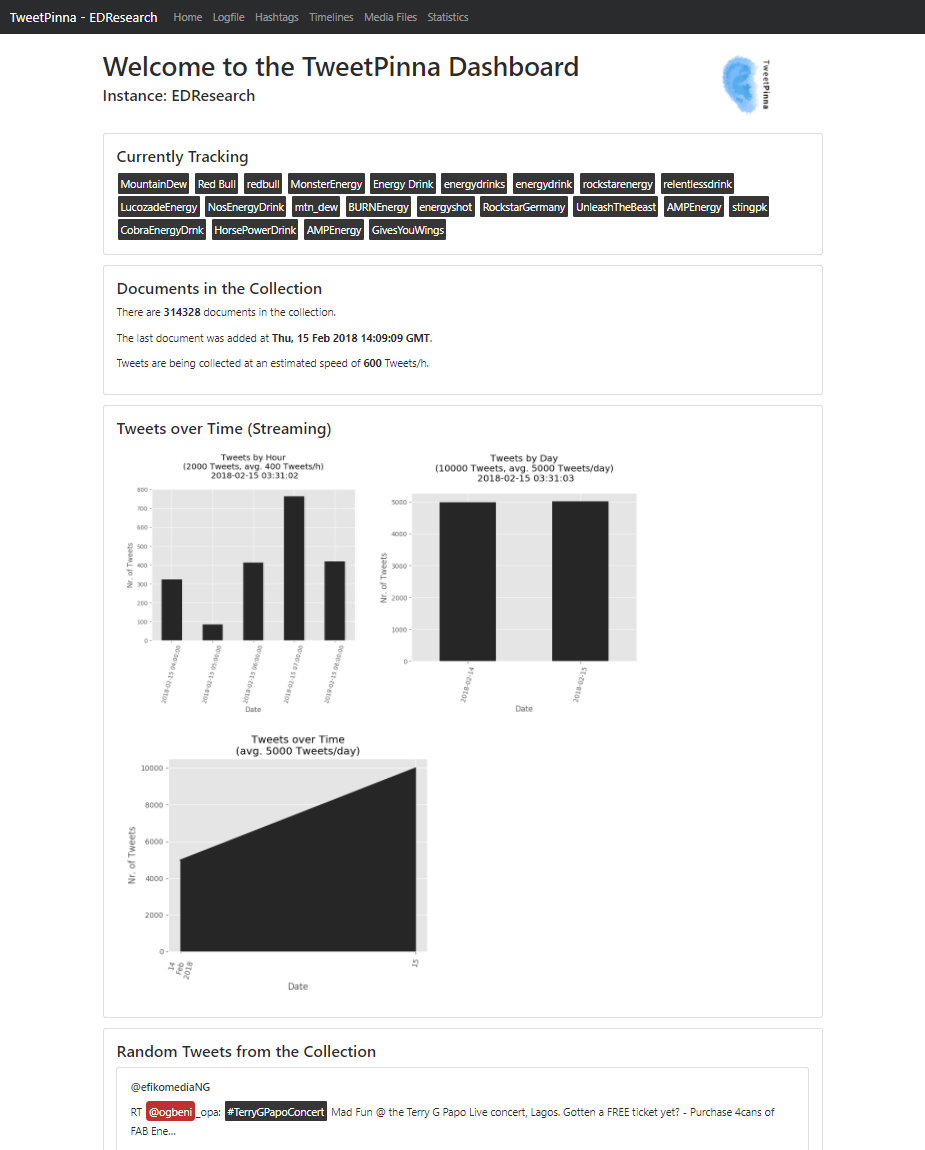 TweetPinna is a tweet archiver written in Python that saves tweets to MongoDB.