Shrinkpack complements the npm shrinkwrap command by maintaining a node_shrinkwrap directory in your project, containing the exact same tarballs that npm install downloads from https://registry.npmjs.org.

The rest of the npm install process is exactly the same. The only difference is that no network activity is necessary when installing and building your project. The node_shrinkwrap directory can be ignored in your editor (much like is done with the node_modules directory) but is instead checked into source control.

For context, please see the target problem and justification sections of this README.

Or to run shrinkpack in full, including all the additional logging that you see when using the CLI.

On most projects I've worked on we've had a Jenkins (or similiar) continuous integration environment, where we would run tests, analyse code, gather metrics, and create deployment packages.

Each time code was pushed to our develop and master branches, a repeatable process was carried out where a clean workspace was created, the latest version of the project was installed and configured, then testing and code analysis took place.

We were all very happy with this process and the convenience of npm in particular, but the phase of our builds where npm install listed a huge amount of network traffic would always raise the same concerns;

The first suggestion was always to check in our dependencies, but the idea of some large and chatty commits whenever we chose to upgrade or change them would put us off.

Some teams went a little further and decided that pain was acceptable and decided to proceed, only to find that some packages such as phantomjs and node-sass helpfully install the appropriate binary for you depending on what system you're running.

This meant that if Chris added phantomjs or node-sass to the project on his Mac and checked it into the repository, Helen wouldn't be able to use it on her Windows Machine.

The remaining alternatives were proxies, mirrors, and caches-of-sorts. None of which appealed to us and, grudgingly, we continued as we were (YMMV).

Whenever we add, remove, or update an npm dependency — we should test our application for regressions before locking down our dependencies to avoid them mutating over time.

npm shrinkwrap is something I would recommend you use anyway, even if you don't decide to use shrinkpack. It brings certainty and confidence over exactly what versions of every nested dependency you've tested against and approved.

A tagged release should be a locked-down, fixed point in time which has been tested sufficiently enough that it is approved and trusted. When fed into a repeatable, automated deployment process it should always result in the same output.

Without npm shrinkwrap that's not guaranteed.

Consider this snippet from the package.json of a nested dependency in your project as an example;

With you hopefully convinced of the merits of npm shrinkwrap, shrinkpack will hopefully be seen as a small and complementary addition.

shrinkpack takes the .tgz tarballs of that specific, shrinkwrapped dependency graph saved by npm shrinkwrap and stores them within your project.

Suitability to your project

shrinkpack is intended for Developers of Apps, Blogs, and Websites – any project which is the root consumer of dependencies and not a dependency itself. If your project is intended to be installed as a dependency of another project using npm install, let those downstream projects make their own decisions on bundling.

That said, if you're developing an npm package and want to use shrinkpack to speed up and harden your development and CI environments, adding npm-shrinkwrap.json and node_shrinkwrap to your .npmignore file will allow you to do that, without publishing your shrinkpacked dependencies to the registry.

It's not recommended to publish a project with bundled or shrinkpacked dependencies to the registry. If that approach were to gain traction, it is likely that the registry would become bloated due to the build up of duplicate copies of packages, bundled amongst various other ones.

Here we create a straightforward project which will use Git and npm. 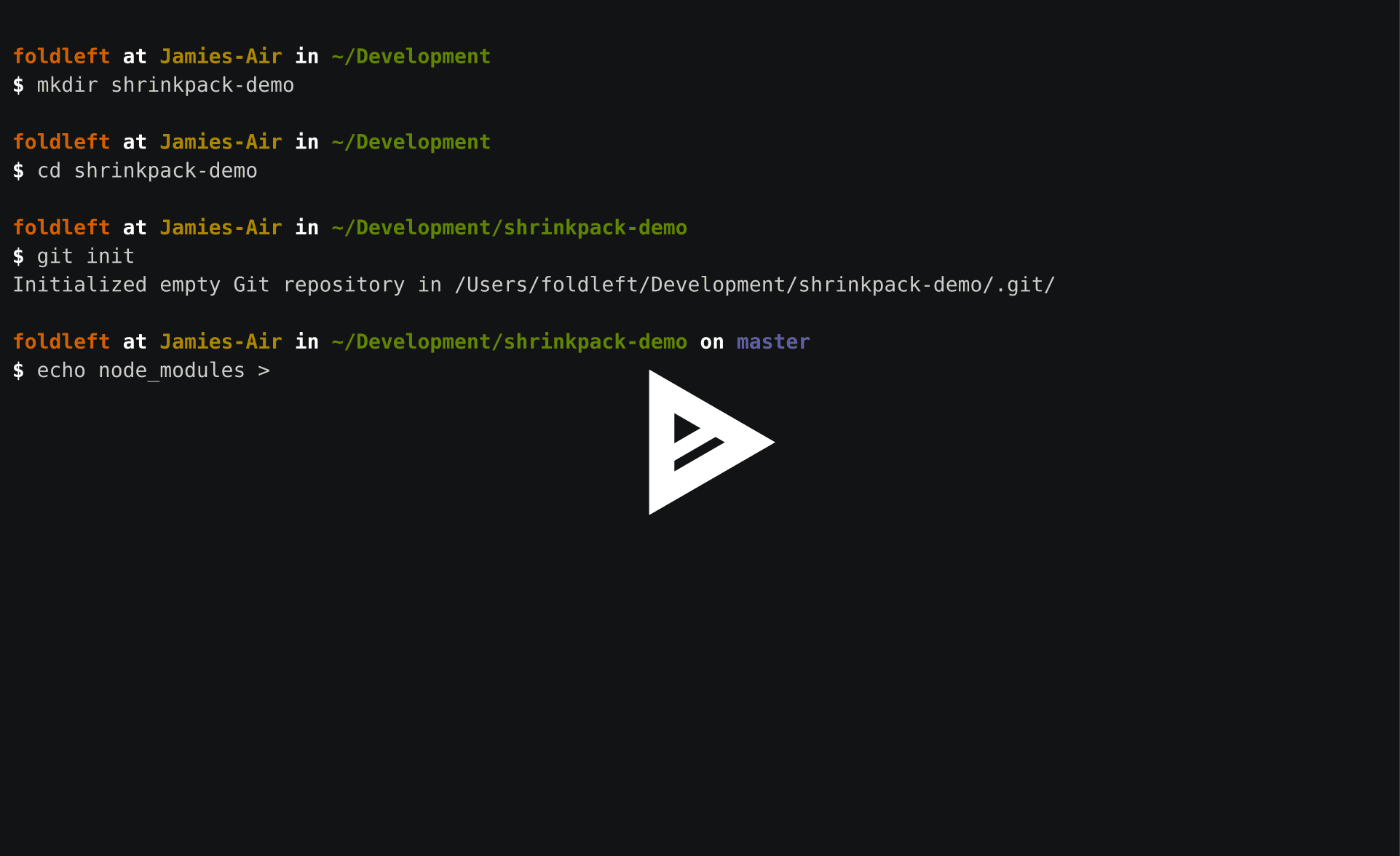 We want each version of our project to be identical every time it is built, so we can have complete confidence when the time comes to ship it. Therefore, we want a package.json which is always up to date and that contains the exact version numbers we have developed and tested against.

For the sake of an example, let's install the following packages. I've chosen an older version of commander so that we can go through how to update a shrinkpacked project later. 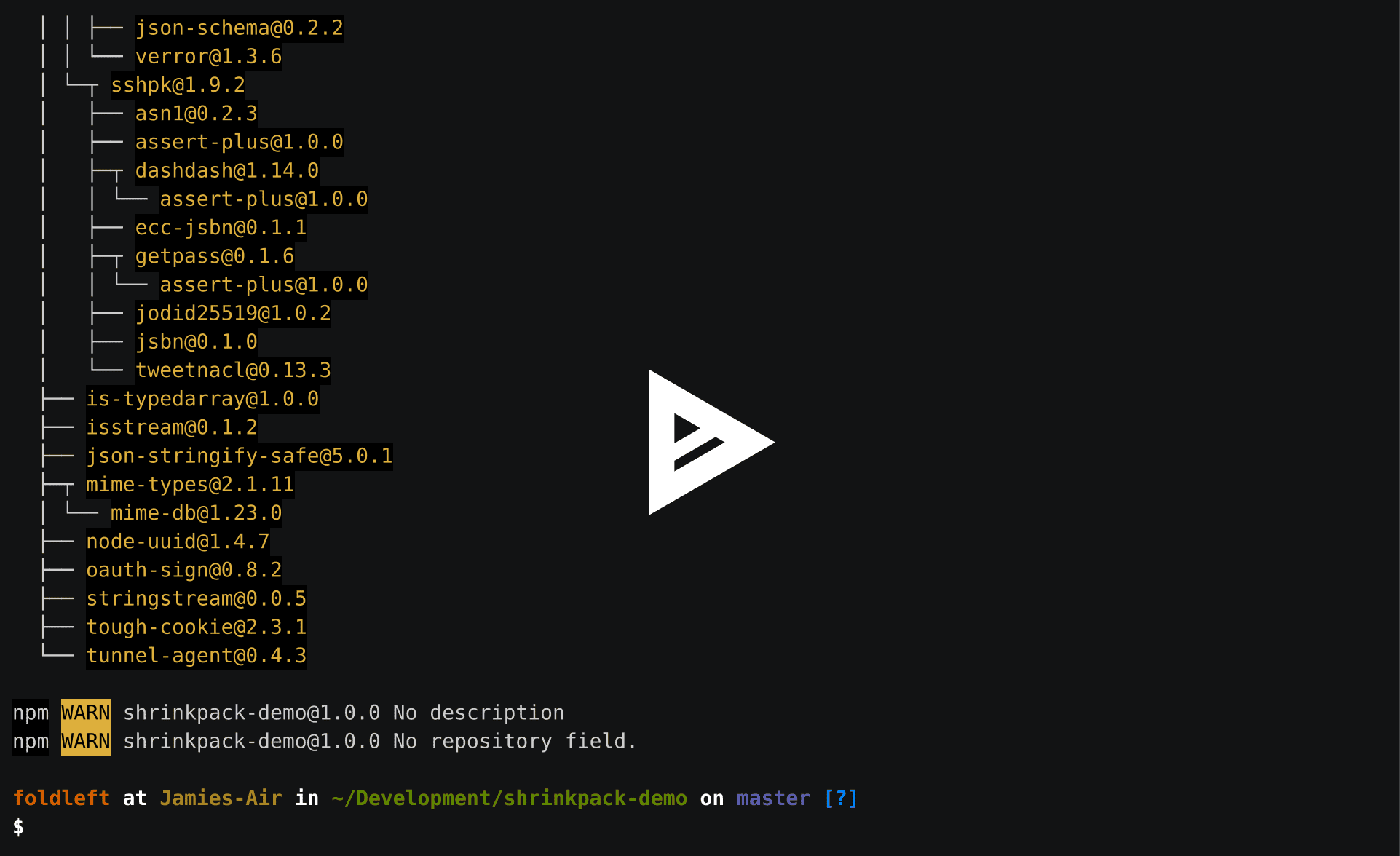 This is typical behaviour, npm downloads the packages from the registry and installs them, leaving the following directory structure;

The --dev option tells npm to also include devDependencies when creating an npm-shrinkwrap.json for your project. 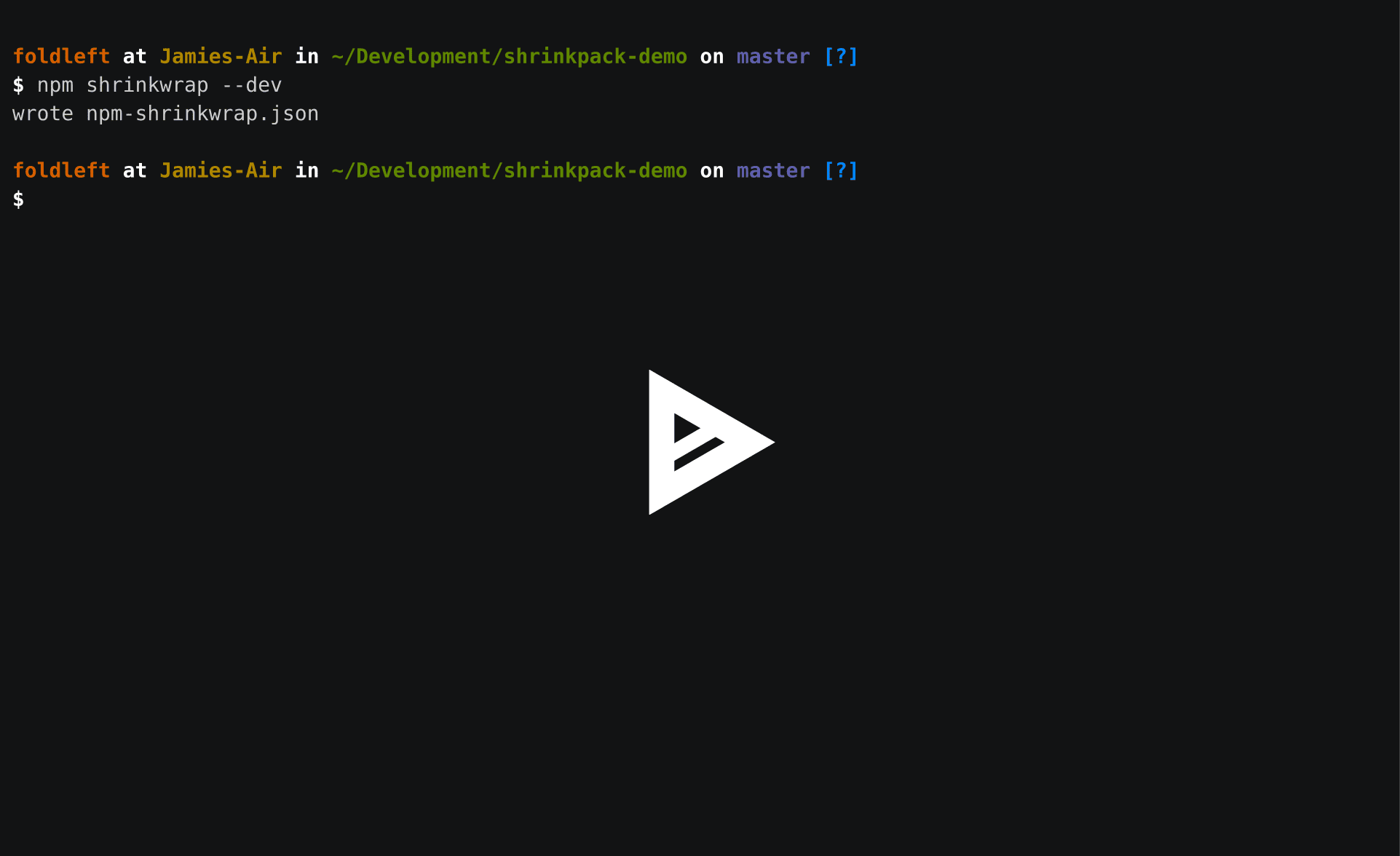 When using shrinkpack, the local file path to dependencies will be added to the npm client's local cache. This can be problematic when working on several projects on a single machine (#31).

This step prevents npm from using this project as a registry should you install the same package/version pair on another project on your machine.

Whenever you run npm install, npm downloads a .tgz file from http://registry.npmjs.org containing the installation for each package. Shrinkpack saves these files in a node_shrinkwrap directory in your project, before updating each record in npm-shrinkwrap.json to point at those instead of the public registry. 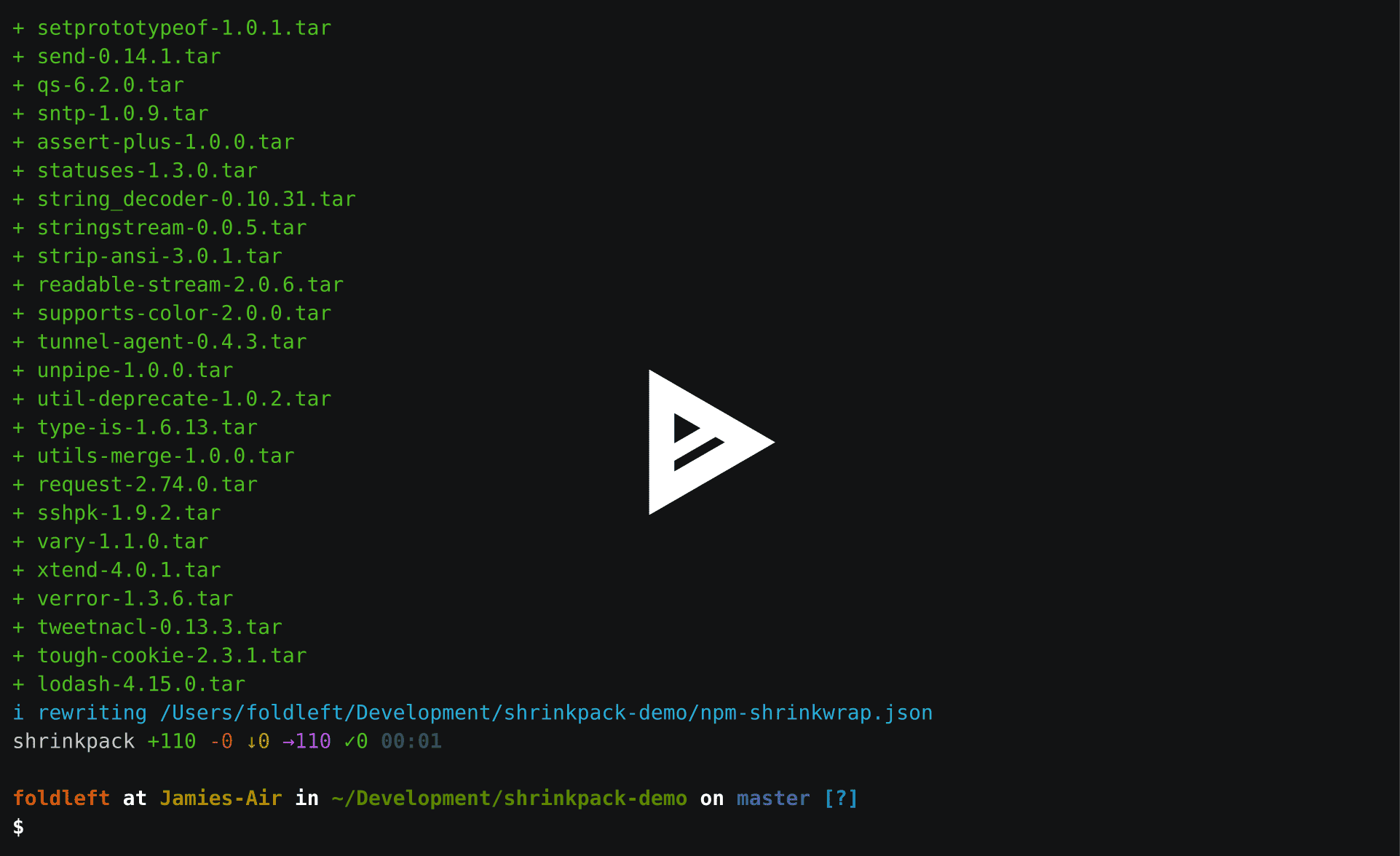 By this point, git status should list the following untracked files;

Let's check them in. 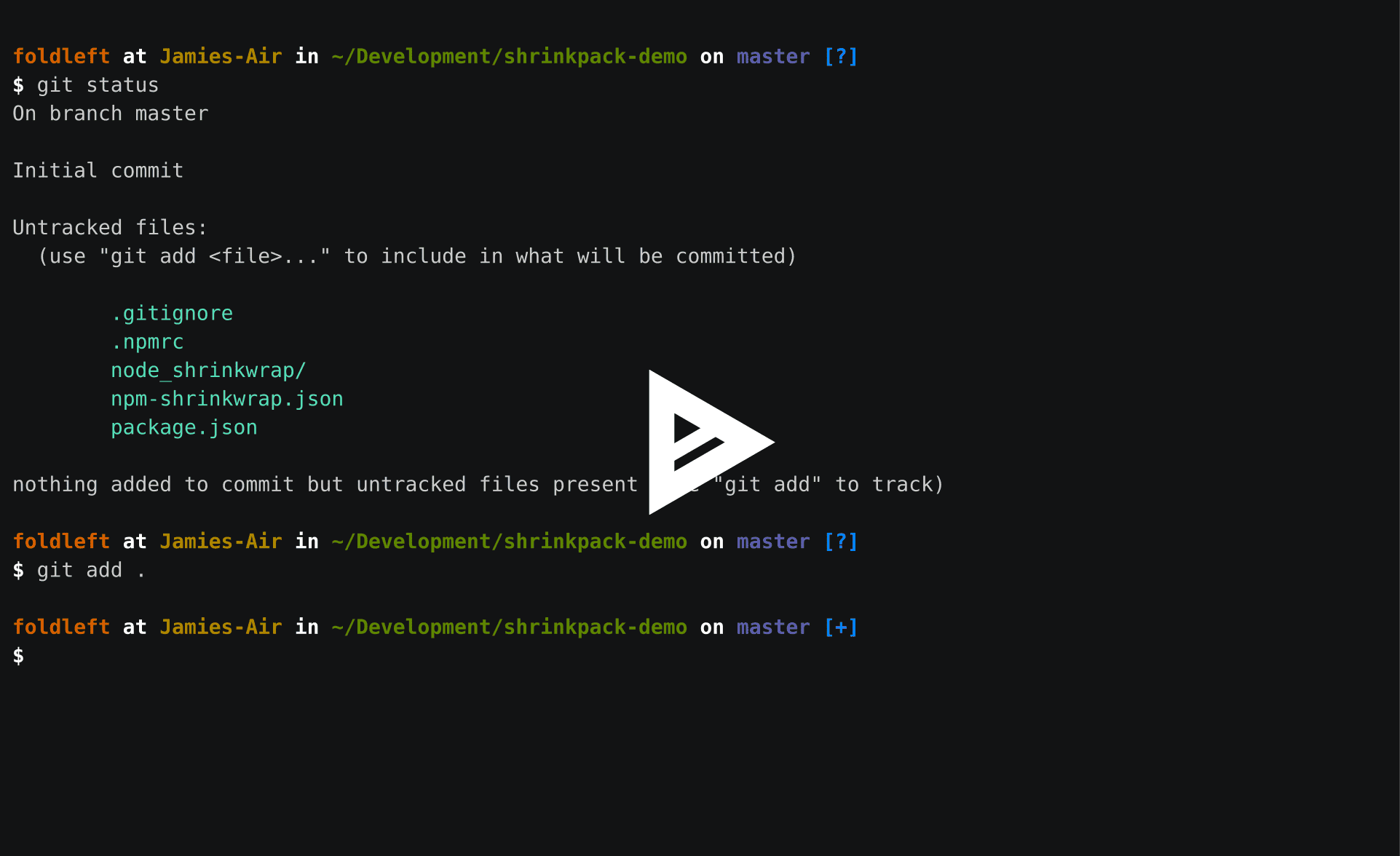 We check this code into Git and tell a co-worker that it's ready for them to contribute to.

Once they have cloned the project, our co-worker runs;

This is new behaviour, npm didn't hit the network at all. Instead it read the packages from the node_shrinkwrap directory directly and installed them straight away. Shrinkpack has allowed us to install our project without any network activity whatsoever – and in a fraction of the time.

If everything went to plan, the only output will be these expected warnings because we didn't choose to add a description or repository to our package.json. 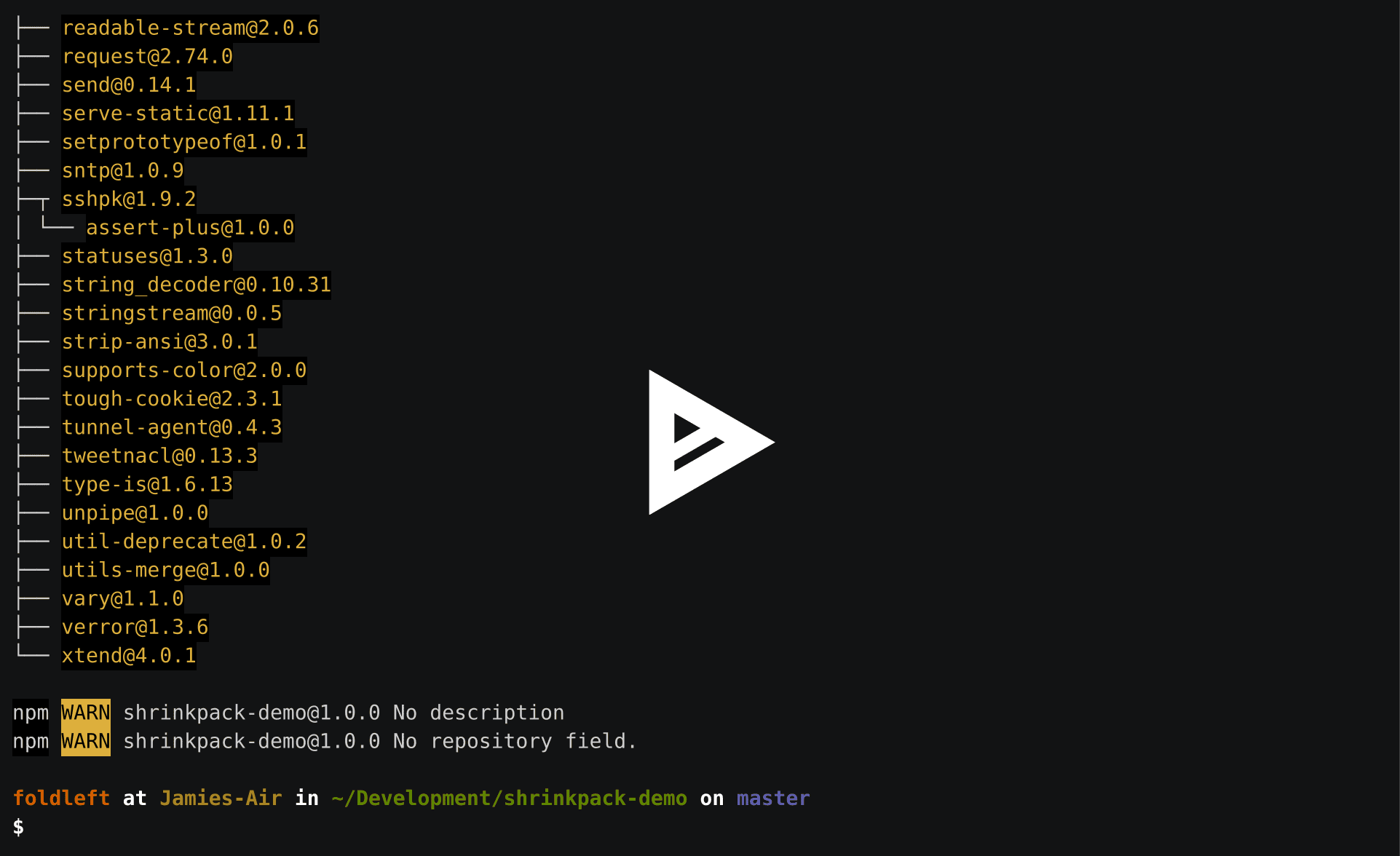 Later, we may choose to add, update, or remove some dependencies;

With our local node_modules now up to date, we now need to update our npm-shrinkwrap.json file and get our node_shrinkwrap directory back in sync with the new changes. 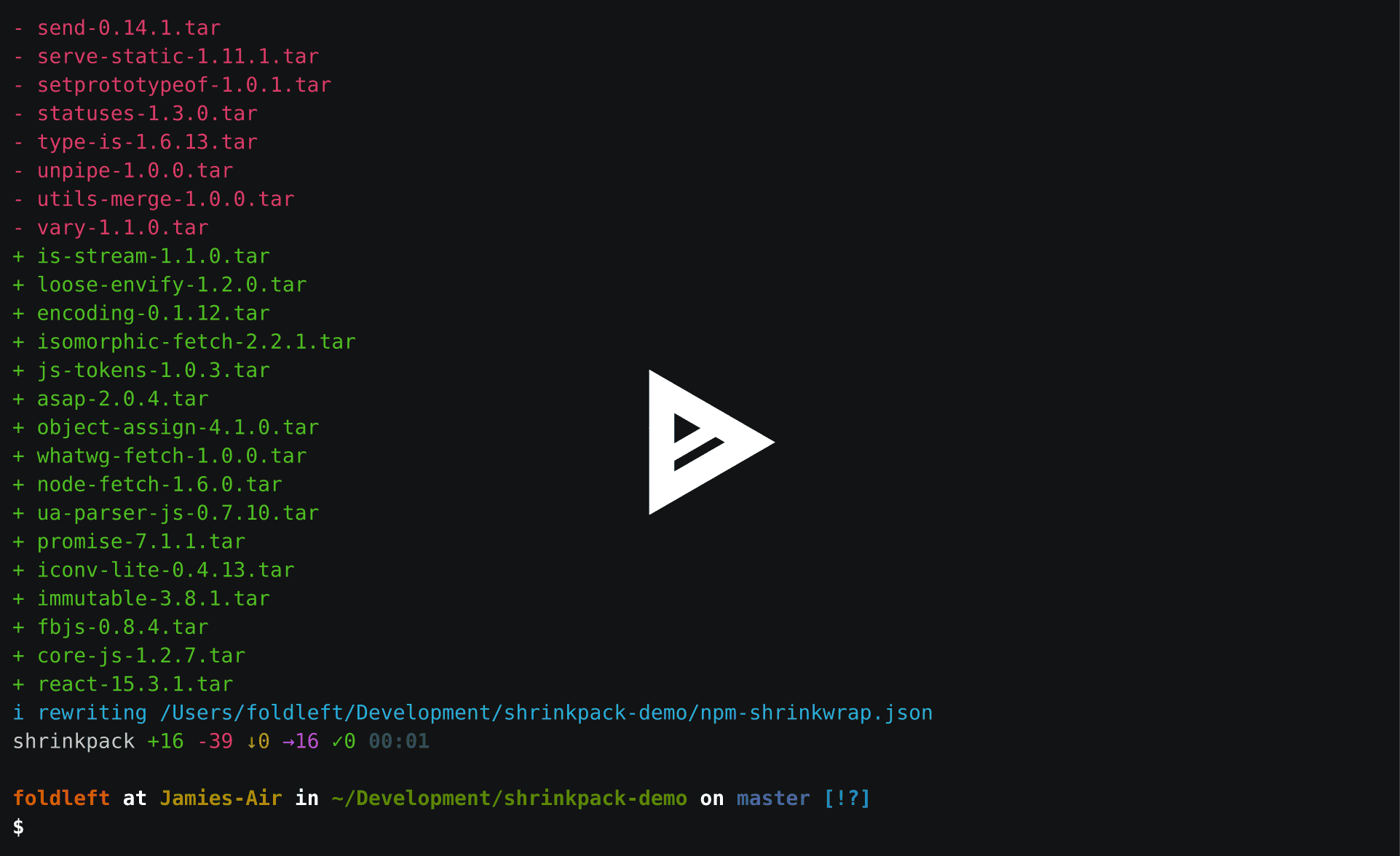 The tarballs in the npm registry are gzipped for optimal network performance, but storing binary files in Git repositories is not optimal. Git is decentralized, so every developer has the full change history on their computer. Changes in large binary files cause Git repositories to grow by the size of the file in question every time the file is changed and committed, this growth directly affects the amount of data end users need to retrieve when they need to clone the repository.

You can toggle between compressed and uncompressed tarballs with shrinkpack --compress. 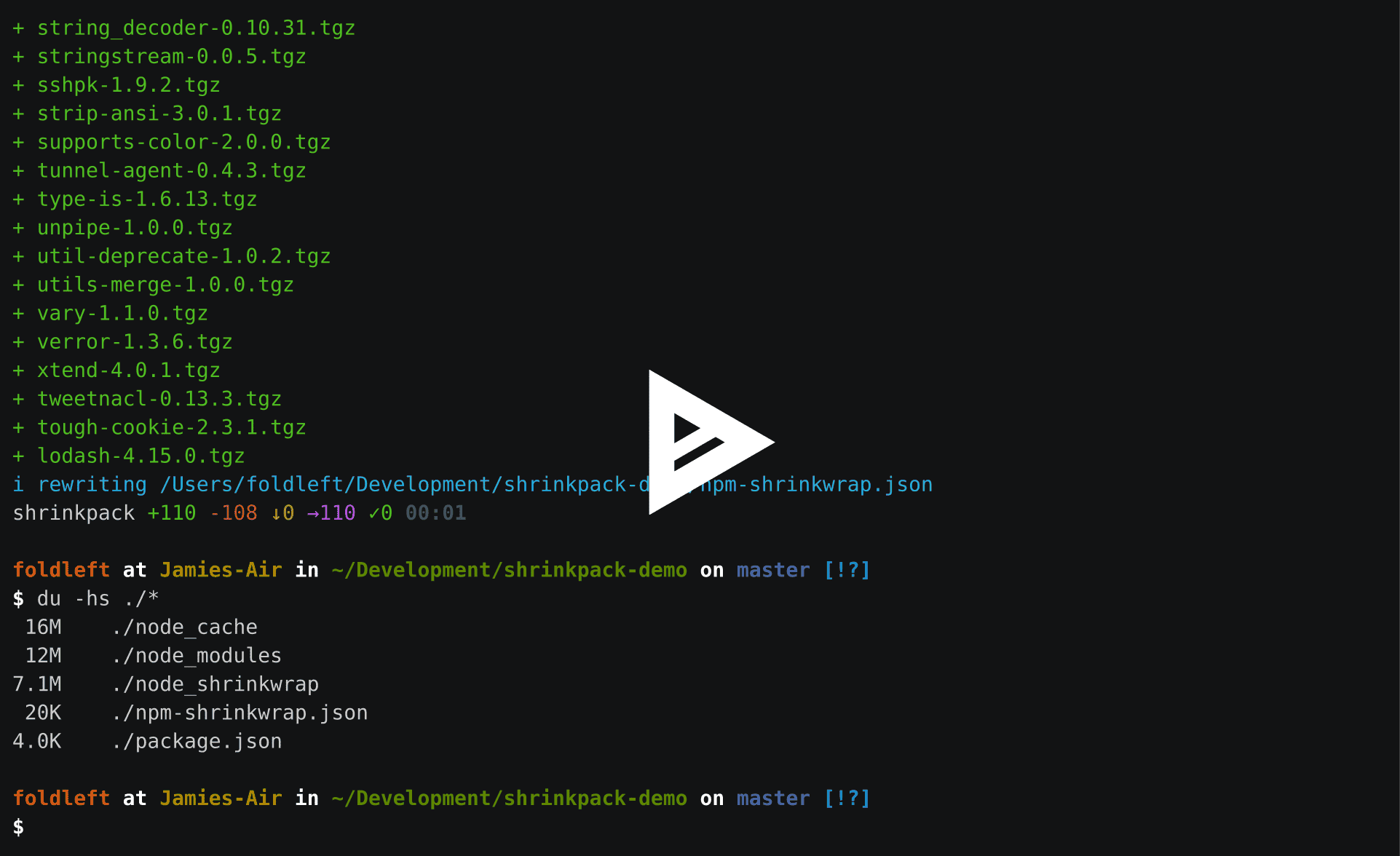 optionalDependencies are removed by default, to avoid issues when trying to npm shrinkwrap your project on platforms where that optional dependency was not installed. More detail is available in this issue comment and this behaviour can be overriden by using shrinkpack --keep-optional.