Script that can be used to convert your mouse sensitivity between different 3D games. 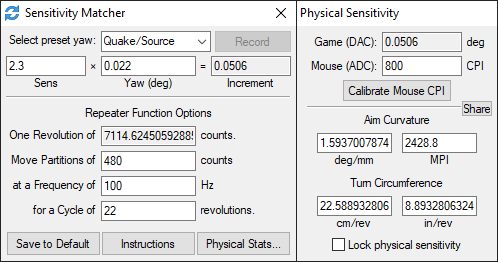 This script lets you match your mouse sensitivity between any 3D games directly, and much more accurately than any paywalled calculators.

Run the script, then:

If the game that you are coming from is not listed, the script can also capture your old sensitivity.
Select "Measure any game" and go into the game from which you wish to export your sensitivity, then:

Press Alt 0 to restart if you made a wrong correction.

With this script, sub-increment accuracy is preserved between rotations, rapidly quenching the uncertainty with each cycle. This means that the script can measure any base yaw to high degree of precision by monitoring for drifts over many cycles.

You no longer need to trust paywalled calculators that derive their measurement from single-rotation estimates approximated by integer counts, which amplifies their measurement error multiplicatively with each successive turn.

Script that can be used to convert your mouse sensitivity between different 3D games.