Software design and analysis tools for the acoustic rake receiver, a microphone beamformer that uses echoes to improve the noise and interference suppression. Python code to reproduce all the results from Raking Echoes in the Time Domain by Robin Scheibler, Ivan Dokmanic, and Martin Vetterli.

This repository contains all the code to reproduce the results of the paper Raking Echoes in the Time Domain.

Using the simple python room acoustics framework created for the Acoustic Rake Receiver, we demonstrate two time domain beamformer designs that use echoes constructively to improve the signal to interference and noise ratio. These designs are explained in details in the paper Raking Echoes in the Time Domain. All the figures of the paper can be recreated by calling simple scripts leveraging this framework. In addition to the results of the paper, we include spectrograms and samples of speech samples. We strongly hope that this code will be useful beyond the scope of this paper and plan to develop it into a standalone python package in the future.

We are available for any question or request relating to either the code or the theory behind it. Just ask!

The geometry of room acoustics is such that the reverberant signal can be seen as a single signal emitted from multiple locations. In analogy with the rake receiver from wireless communications, we propose several beamforming strategies that exploit, rather than suppress, this extra temporal diversity. Unlike earlier work in the frequency domain, time domain designs allow to control important timing parameters. Particularly important is the ability to control perceptually relevant parameters such as the amount of early echoes or the length of the beamformer response.

Relying on the knowledge of the position of sources, we derive several optimal beamformers. Leveraging perceptual cues, we stray from distortionless design and improve interference and noise reduction without degrading the perceptual quality. The designs are validated through simulation. Using early echoes is shown to strictly improve the signal to interference and noise ratio. Code and speech samples are available online in this repository.

Robin Scheibler, Ivan Dokmanić, and Martin Vetterli are with Laboratory for Audiovisual Communications (LCAV) at EPFL.

Recreate the figures and sound samples

In a UNIX terminal, run the following script.

Alternatively, type in the following commands in an ipython shell.

The figures and sound samples generated are collected in figures and output_samples, respectively.

The SINR simulation can be very long. For that reason, we split the simulation loop and the plotting routine into two files. We recommend to first modify the value of the loops variable in figure_SINR_sim.py to 10 and time the simulation to have an estimate of the total time required to run the simulatioin. The output of the simulation is saved in data/SINR_data.npy. The data can be plotted using figure_SINR_plot.py.

The simulation data from the paper is available in data/SINR_data_Lg30ms_d20ms_20141008.npy and can be processed with figure_SINR_plot.py.

While it was omitted in the paper for space reasons, we provide here simulation results for speech samples.

The spectrogram of all samples as well as the desired sound are provided.

The samples and the spectrograms are created by the script figure_spectrogam_and_samples.py.

Beyond the simulation results presented in the paper, the raking beamformers were validated with room impulse responses (RIR) measured in a classroom at EPFL. The RIR are stored as wav files in BC329_RIR_8kHz/RIRs and the methodology for the measurements is outlined in BC329_RIR_8kHz/README.md.

The RIR were measured for a static linear array of 8 microphones spaced by 8 cm. RIRs were measured for 12 different source positions. In the validation all 132 combinations of desired/interfering sources are tested. Sound propagation is simulated by convolving speech samples with the RIR.

Using the measured room dimension and locations of sources, as well as approximate reflection coefficients for the walls, both Rake MVDR and Rake Perceptual beamformers are computed. The output of the beamformers is evaluated with respect to the clean desired speech signal using the perceptual evaluation of speech quality (PESQ) metric.

Even though the calibration of room characteristics, microphones, and speakers locations was only approximate, we observe the same kind of thread than in the pure SINR simulation. That is speech quality is improved by using extra reflections in the room. 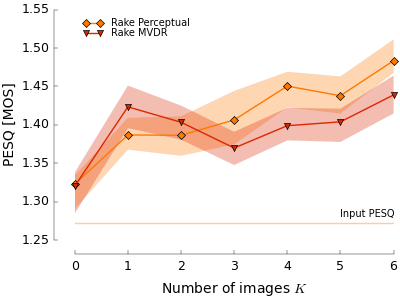 We also include extra scripts that let us play with the different beamformers. The script names should be self-explanatory.

Download the source files of the ITU P.862 compliance tool from the ITU website. Follow the instructions to compile the tool and copy the executable produced in the bin directory.

Execute the following sequence of commands to get to the source code.

In the Software/P862_annex_A_2005_CD/source/ directory, create a file called Makefile and copy the following into it.

Execute compilation by typing this.

This code is free to reuse for non-commercial purpose such as academic or educational. For any other use, please contact the authors.

Software design and analysis tools for the acoustic rake receiver, a microphone beamformer that uses echoes to improve the noise and interference suppression. Python code to reproduce all the results from Raking Echoes in the Time Domain by Robin Scheibler, Ivan Dokmanic, and Martin Vetterli.