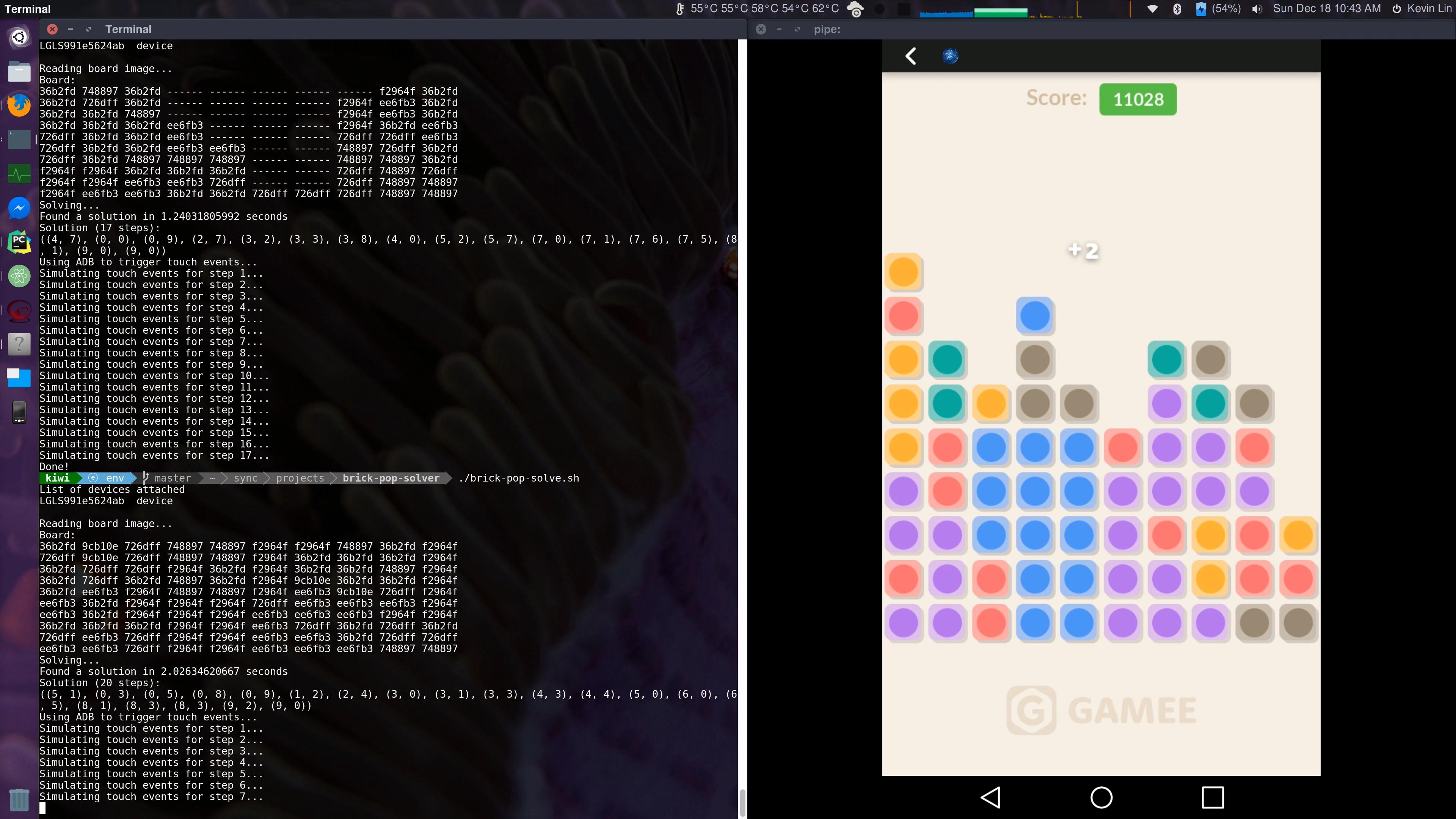 At a high level, this program parses a screenshot of the board, generates a step-by-step solution by simulating brick-popping gameplay, and replays these events by using ADB to simulate touch events on an actual connected device to play through the solution for you.

It's humbling to see the number of other open source Brick Pop solvers inspired by this project. If this one doesn't work for you, please see the other solvers written in a variety of languages with several unique approaches (including one using a score-optimizing beam search algorithm).

The approach this program takes toward generating a solution is aggressive optimization of a search through a very large solution space. Effectively, the simulator considers every possible transition from one state/board configuration to another (based on some very simple rules, summarized below), and explores each of these paths using a depth-first search strategy.

In the worst case, there are six unique colors on a fixed-size 10x10 board, resulting in the possibility that each node uncovers anywhere between 10-20 additional potential solution paths. A breadth-first search would be computationally infeasible; the structure of the game is such that it is inherently more efficient to fully explore an entire route and check its validity rather than exhaust individual paths as they are uncovered from state transitions. This is because of the fact that any single input board configuration is likely to have several valid solution paths.

Fortunately, the gameplay rules are simple enough that the state transitions can be modeled very precisely:

This program makes use of no heuristics to generate a solution; rather, it only attempts to be clever in the way the solution space is searched.

Since the entire solution space is searched until DFS finds a valid solution path, this program exploits multicore processing by dedicating a process to each available starting point on the board. This allows for multiple solution paths to be explored in parallel; once one process finds a valid solution, it returns this value and kills all other processes. This approach is inherently non-deterministic, but in practice, this process-based parallelism has decreased the amount of time taken to arrive at a solution by several orders of magnitude.

The implementation as-is defaults to a parallel solve, but this can be changed by substituting parallel_solve for serial_solve in solve.py.

Most boards can be solved in less than 10 seconds. On occasion, a solution might not be found until several hundred seconds in. Generally, if no solution is found after this amount of time, it helps to partially solve the board (i.e. eliminating one color) and running the solver again.

Run all unit and integration tests:

PRs must pass the Travis build to be accepted.