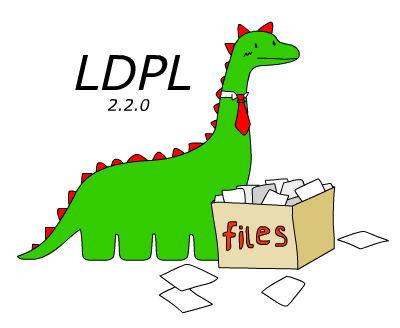 This is LDPL Stable Release 2.2.0. Hooray! This new version brings a lot of new stuff to the table. First of all, many bugs have been fixed. Then, this new statements have been added to the language (and will be added to the reference later today):

The source code for this release can be downloaded below.

LDPL has been tested and works on x64 Windows, x64 macOS, x64 Linux, ARMv8 Linux, PPC Linux and PPC OS X. Please download the source code and compile LDPL yourself by following the instructions detailed on README.md. Binaries for x64 Windows and Linux will be uploaded later today.