OCRbot is a Mastodon (and compatible, such as Pleroma) bot that uses OCR to automatically generate text descriptions of images. It reads the image and outputs what it thinks is the text contained, using tesseract. It requires Python 3. 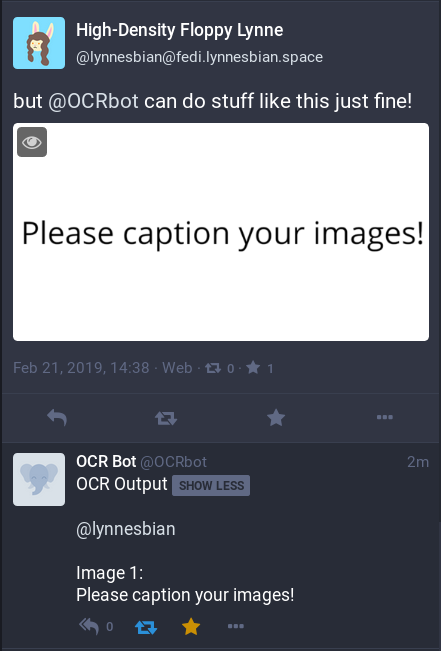 A working version of OCRbot can be found here. I'll always run the latest version, and the instance hosting it has a much higher character limit than Mastodon's default of 500 or Pleroma's default of 5000 (specifically, it has a limit of 65535 chars). If you'd like to run your own version that works differently (for example, maybe you want a version that works with Japanese text instead, or a version that uses a different OCR engine), then you're free to fork and modify!

What about the higher quality data packs?

According to tesseract's GitHub wiki:

Most users will want tessdata_fast and that is what will be shipped as part of Linux distributions. tessdata_best is for people willing to trade a lot of speed for slightly better accuracy.

With the setup I'm using, I really can't afford to use much more processing power just for "slightly better accuracy". Additionally, most Linux distributions only ship the fast set, which makes obtaining the best set an extra step. I haven't tested how much better fast is than best, but given that distributions like Arch and Debian deemed fast good enough to be the only package available, I'm inclinded to suspect that this is a case of diminishing returns, and that it's not worth the extra effort of obtaining these files, as well as the extra CPU usage required to use them.

Run login.py, and answer the interactive prompts. To further configure OCRbot, open config.json and edit the settings as you wish. Here is an explanation of the options in the config file:

Running OCRbot as a Service

You can use something like systemd or SysVinit to manage running service.py for you. I've provided an example systemd script here. It requires some editing (to specify where your OCRbot folder is located, and to specify the user to run it as -- don't run it as root), and then you simply need to

You may also sudo systemctl enable OCRbot if you want it to start on boot.

OCRbot is not designed to replace captions, merely to supplement them. It works best with plain black text on a plain white background. For example, PDF scans and Wikipedia screenshots will work great, but handwriting and distorted text won't. It will almost always fail (at least partially) for:

Additionally, OCRbot may sometimes fail to find images due to federation issues. This is a known issue, and OCRbot does its best to work around it, but due to the way federation works, it will never be completely solved.

If you can caption images yourself, I recommend doing so. If, for example, you are posting a screenshot of a tweet, you'll get better results from copy and pasting the text of the tweet as a caption rather than relying on OCRbot. OCRbot's image recognition is far from perfect and never will be.

Support for Other Languages

OCRbot is capable of supporting languages other than English. If you are using Debian, you can install the package tesseract-ocr-all to install all language files, or install individual ones, such as tesseract-ocr-jpn for Japanese. Arch also provides these packages, with slightly different names (e.g. tesseract-data-jpn), although it does not have an "all" package.

While invoking OCRbot, you may encounter a number of errors. While the text is somewhat self explanatory, this section exists to provide further elaboration on their meaning.

This program is free software: you can redistribute it and/or modify it under the terms of the GNU Affero General Public License as published by the Free Software Foundation, either version 3 of the License, or (at your option) any later version.

This program is distributed in the hope that it will be useful, but WITHOUT ANY WARRANTY; without even the implied warranty of MERCHANTABILITY or FITNESS FOR A PARTICULAR PURPOSE. See the GNU Affero General Public License for more details.

You should have received a copy of the GNU Affero General Public License along with this program. If not, see https://www.gnu.org/licenses/.

The full text of the license is provided under the name "LICENSE" in the root directory of this repository.