This project is an entry into #AWSDeepLensChallenge. Simon Says is a childhood game where the players act out the commands from Simon. When Simon says to do something you do the action, however when Simon doesn't give the command you should not do the action. Our project is building a Simon Says Deep Learning platform where everyone can join the same global game using Deeplens to verify the correct action of each player. 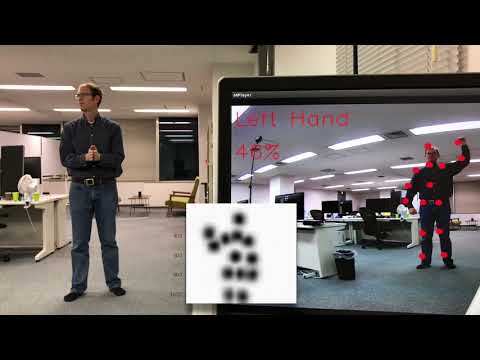 The Deeplens device is used to process the video stream of the player. The video stream is formatted to fit our network of 184x184 resolution. We crop the left and right siding of the image to form a box and scale the image down keeping the aspect ratio. Our model is optimized to use the GPU which is required or processing time for one frame takes ~30-60s, compared to about .6-1s using GPU. We use the output, a series of images, to calculate the position of the body, which we refer to as the pose map. The pose map consists of ordered (x,y) positions of each body part, which we feed into a classification network to tell us the predicted action.

The Simon Says game network is built using AWS services. The process starts from cloudwatch where a chain of events is triggered every minute that will generate and distribute a new game. The first step is a lambda event that queries an S3 bucket using Athena, this query is used so we can add new game actions by just uploaded a file to S3. After the Athena query is finished the output activates a 2nd lambda which is used to generate the next game by randomly picking one action and deciding if simon says or not and it will publish the game to an IoT channel. All Deeplens devices will register to this IoT channel and it will be notified when a new game starts. To get setup on the device all you need to do is SSH or open a Terminal, clone this repo, download the optimized model and mxnet classification model, and install the python requirements.

This project uses two open source projects as reference. The original model and development is credited to them.