An extension to the original dmenu allowing super fast access to your files, folders, and programs. dmenu-extended has support for plugins, command aliasing, file filtering, and customisation. You can also use dmenu-extended with rofi!.

Clone this repository or download the zip and extract its contents.

You can try dmenu-extended without installation by running python dmenu_extended.py from within the extracted folder.

Execute sudo python setup.py install from within the dmenu-extended directory.

Execute python setup.py install from within the dmenu-extended directory

Add this folder to your systems $PATH variable

Copy the required dmenu-extended files into your local bin folder

To keep your ~/bin folder on the path after restart, add export PATH=$PATH:$HOME/bin to the end of ~/.bash_profile

Test that the new menu has been installed by running dmenu_extended_run from your terminal. NOTE: The first run will be slow as it is set to scan you home folder recursively to build the cache.

The most productive way to use dmenu-extended is to bind the command dmenu_extended_run to an easy to reach key combo. The way in which you do this will be different depending on your desktop environment but here is a brief list.

dmenu_extended_run supports automated menu item selection via argument passing. If, for example, you frequently use the 'Internet Search' plugin with a particular search provider, you may want a binding that takes you directly to that provider. To do this you might bind the following command to an alternate key combination:

The arguments must be written exactly as they would appear in the menu. Any number of arguments can be passed and each will be executed in the order they are passed. Each item represents one item selection from a menu. Remember to quote each item so they are passed to the menu correctly.

Functions of the items are as follows.

Rebuild the cache from terminal

It is possible to rebuild the cache from the terminal by running:

You can also rebuild the cache everytime a file or folder is being created, deleted or moved from or to the monitored path. Have Incron up and running. Edit your incrontab incrontab -e and add following line:

You can update your application cache after installing/uninstalling a package via a pacman hook for immediate access/removal. Create a file /usr/share/libalpm/hooks/dmenu-cache-rebuild.hook:

You need to execute the rebuild command via sudo -u <USER>, because pacman runs as root and would therefore not update userfiles.

Ensure you have Rofi installed and edit the following two configuration options as so:

You may also need to add

to remove the extra colon depending on your Rofi version.

These modifiers are entered into the menu; examples follow.

+ (plus) - Manually add an entry to the cache

If there is something you wish to run that isn't in the menu then you can add it by prepending with a +.

Once added these commands are stored in the preferences file (see general configuration) and will persist upon a rebuild of the cache. These items can also be manually edited within this file.

In addidion to adding items manually, dmenu_extended allows the addition of a more descriptive label for a stored command. For instance:

- (minus) - Remove a manually added entry from the cache

This applies to items that have previously saved to the store. If the item is not found in the store you will be given the chance to add it.

There are a few different ways to use the colon operator, summarised by example below. In these examples gedit is the name of a text editing application.

Holding the terminal open on exit

By using two semicolons (;;) at the end of a command the terminal window will remain open once the executed command has completed. This is useful for running programs like inxi that exit on completion. You'll want to use this if you see your program flash up and disappear before you get a chance to see the output.

If you have an aliases file (for example ~/.bash_aliases or ~/.zsh_aliases) that you would like loaded into dmenu-extended, set it's path in the "path_aliasFile" field in of the preferences. Aliased items found in that file will show up in the menu once the cache has been rebuilt.

By default, all aliased commands are displayed prefixed without a prefix and no indication of the command being launched is given (for example ff). If you would prefer to have the aliased command appear with a prefix and some indication of what the command will launch (e.g. # ff (firefox)) - make the following alterations to your preferences file and rebuild the cache.

Test the configuration by running a sudo command via dmenu-extended (e.g., sudo gedit). You should be prompted grapically for the password before the program opens. 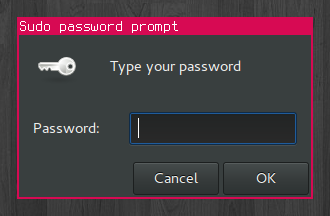