I’ve been working on a plugin for ArcDPS using its realtime combat api. The plugin shows a realtime list of failed mechanics for players. The mechanics are determined by the skill id of the attack a player/npc is hit by. It shows a timestamp in ‘min:sec’ since entering combat and ‘X was hit by Y mechanic’.

This plugin is not intended to breed toxicity, but instead help show players mechanical areas where the players can improve. This is in the same way that arcdps shows how dps/boons could be improved.

Here are some example screenshots (with names redacted): 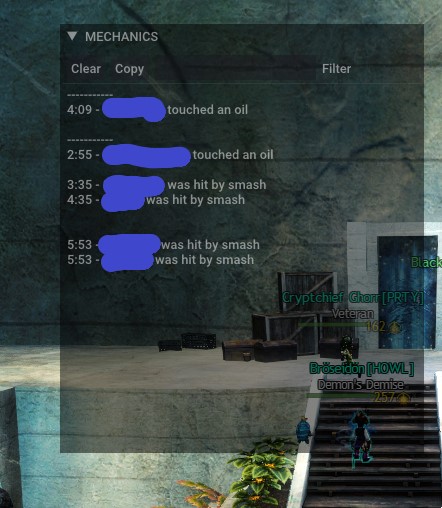 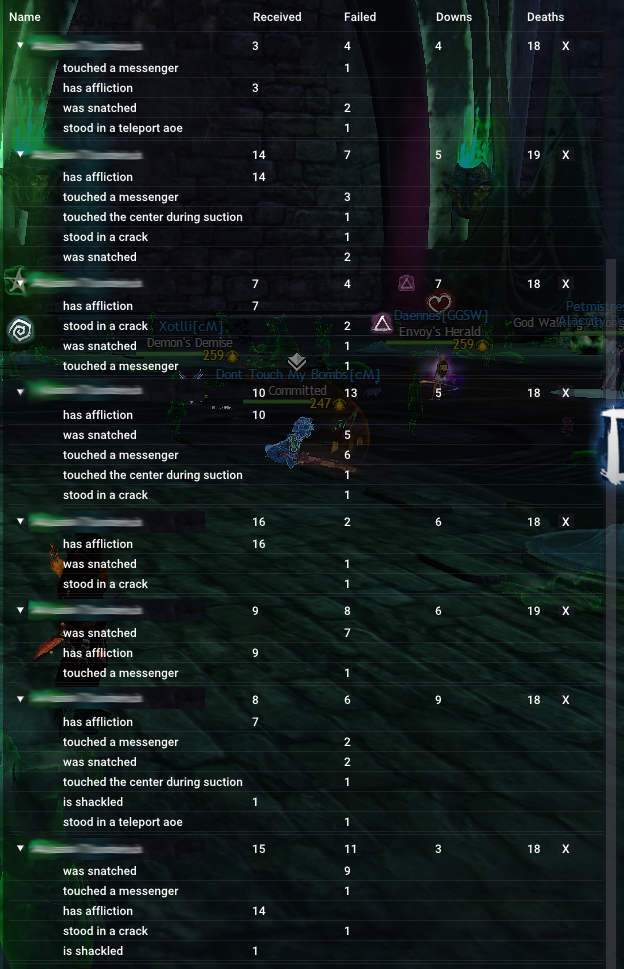 (I use a custom arcdps font found here)

If you have any ideas for things I’m missing, please let me know.

I have no current interest in mechanics detection for PvP / WvW. I’m not even sure what kind of things would be useful to show from those game modes. I don’t PvP / WvW much myself.

This requires a recent version of arcdps . When in doubt, get the latest from here.

Put the .dll file in the same folder as arcdps (Program Files/Guild Wars 2/bin64 by default).

To disable, just remove the .dll or move it to a different folder.

If arcdps updates the combat api, this plugin might need to be updated for compatibility.

Be sure you’re running the latest version of arcdps.

Ensure the .dll file is in the “bin64″ folder, not the “bin” folder

Right click on the .dll file -> go to properties. If there is an “Unblock” button, click that button and apply changes

If an attack is successfully blocked, evaded, or invulned, then it is not listed.

Attacks that interrupt (Gorseval slams, Samarog slaps, etc) are not listed if the player has stability.

The combat api has a small delay (~2 seconds) before the mechanic will be shown.

All the combat data used by this plugin are in the arcdps .evtc log files anyway. This simply parses it in realtime.

Some of the mechanics are not necessarily bad. Getting a bomb on sloth is normal, but if the bomb is then dropped in a bad place, you can see who had it.

A “neutral” mechanic is a mechanic that a player might have to deal with during the fight. This isn’t bad, but it might lower that player’s personal DPS to do the mechanic (e.g. Matthias corruption, Dhuum shackles, etc)

A “failed” mechanic is a negative mechanic that a player was hit by (e.g. Vale Guardian teleports, expanding a Deimos oil, etc)

Some mechanics are not necessarily the hit player’s fault. If 1 sub-group gets slammed on Gorseval, that might be the chrono’s fault (depending on the group’s strategy).

A: Yes. I’ve talked to Chris Cleary from Anet and he did not see any issues with compliance. (part1 part2)

If a player has a magnetic aura, reflecting distortion, etc and reflects a shard on Matthias, it will say the player with the buff reflected and not the player that granted the buff.

The chart will track downs/deaths of players in open-world PvE / WvW squads. This can get spammy. For now, I recommend clearing the chart before starting instanced content to avoid the clutter.