Sign up
External plugin for RuneLite: Tracks and saves off-pray hits for both yourself and your targets in order to estimate performance in PvP.
Find file

Tracks PvP performance by keeping track of various stats. Only useful for 1v1 PvP fights that involve overhead prayers and/or gear switching, LMS being the perfect example. Multi will cause problems. Potentially inaccurate outside of LMS.

1. Tracks if you successfully hit your opponent off-pray or not. For example, if your opponent is using protect from melee, you must hit him with magic or ranged for a successful off-pray hit.

2. Tracks deserved damage. This looks at you and your opponent's current gear, and calculates average damage based on accuracy & strength stats/pray. This does not track your current hits in any way, it doesn't involve hitsplats. More in-depth details on both of these stats below.

The vast majority of the deserved damage statistic was not implemented by myself, it was created by Mazhar, @maz_rs on twitter, @voiderman1337 on github. Massive thanks to him, I think it really brings this plugin together since the off-pray hits alone can be misleading in a few relatively common cases. 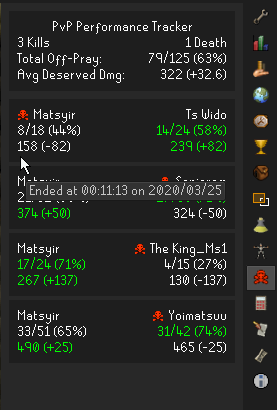 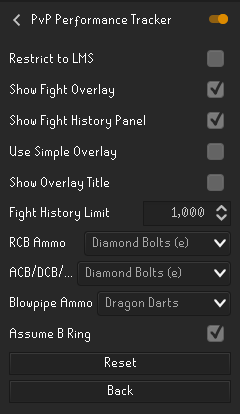 Note that I was not using 'Use Simple Overlay' and 'Show Overlay Title' in the gif/video. With Simple Overlay, it only shows the RSN and off-pray percentage, no fraction and no deserved damage (but they will still be in the panel).

A component I'm not 100% confident of, although it works very well from the testing I've done so far: target selection. It all comes from the onInteractingChanged event, which can have some odd behaviour sometimes since following or trading will also trigger this event. Attacking someone already in combat will also trigger this event. I put a few different checks to validate and ignore this event depending on the state, but I'm sure are other ways it can be improved I didn't think about.

The stats are displayed as such: "successful off-pray hits / total attacks (success %)". See the gif/video or panel for example. The success percentage will be green if it is the highest one. These stats are displayed on the overlay, and on the panel as the second line. The success percentage is not a guaranteed way of determining if a player performed the best. It is a good general idea, but it is merely saying who hit off-pray more often than on-pray. You need to take into account weapons' attack speeds, total number of attacks, and armor used while attacking to get the full picture, but nonetheless this is a helpful metric to have. Combined with the deserved damage, we can pretty much figure out who performed better.

I can't guarantee accuracy for use outside of LMS, because of the way attack styles are determined: that is by checking the Player's current animation. There are definitely a few random weapons I still haven't thought about that won't be included. But I am confident it will work in over 90% of cases, since people tend to stick to fairly common pking loadouts. Thankfully, most weapons AnimationIDs are re-used (e.g all normal scim slashes share one animation, crossbow is same with all bolts). Due to this, loads of weapons I haven't even tested are supported.

It would take forever to make a nicely formatted list of these, and on top of that many weapon animations are re-used, so more than I know are supported. Check out the variable names & comments in this file for a full breakdown of supported weapons/what I've tested. All LMS gear should be supported, as well as general popular pking gear, including some less common weapons like anchor, the 4 godsword specs, revenant weapons, dmace, etc. Basically all F2P weapons should be supported as well but I don't think this would be useful for F2P. There are surely some uncommon but relevant weapons or specs I forgot about so feel free to submit those as an issue if you notice it in a fight, or not mentioned in the file.

Not because they can't work, simply because I don't have their AnimationIDs.

This directly takes all of you and your opponent's gear, calculates the total stats, and gives you an average damage value, using OSRS accuracy/damage calculations, depending on opponent's gear, pray, if you're using a special attack, among other factors. It does not involve hitsplats in any way, does not look at actual damage dealt. It only calculates average "deserved" damage. This is also displayed on the overlay & panel, on the 3rd line, showing the cumulative value for that fight and the difference with the opponent. For example, if you've dealt 3 attacks, granting 14, 9, and 12 damage respectively, you'd have 35 total deserved damage. If your opponent had 40 damage at the time, your deserved damage would be displayed as "35 (-5)".

This also is not 100% reliable, but it too should work in the vast majority of cases. This component is able to retrieve item stats dynamically, from cached wiki data, for the vast majority of relevant items. Some very obscure items won't have stats. One problem is bolts/ammo, we can't detect which are used, so there are configs to choose which ones are used for the estimations. Another is rings, we can't detect that either. Base spell damage also needs to be hardcoded based on animation, which is not completely possible since animations are shared between different spells. However, all other melee gear stats or general range/mage gear stats can be automatically retrieved and used for damage calculations.

The damage calculations can be found all across this file. Range Ammo Data is in this file.

All weapon & gear stats are loaded dynamically. The exceptions to this are stats for rings and ammo (bolts/arrows), and base magic spell damage. We can't detect what bolts/rings are used, and we must manually hardcode all base spell damage. Special attacks with damage or accuracy modifiers also have to be manually hardcoded.

Ammo is either specified in config, or assumed. LMS uses regular diamond bolts (e) even for ACB so that is default. Bolt specs assume no diary completion. Antifire potions & anti-dragon shields are never taken into account for dragonfire bolts, if chosen.

Based on animations, which are re-used for many spells, so can't be fully accurate. Other sets of spells could be added but it's tedious. Submit an issue if you'd make use of more.

Since these are currently the only specified spells, anything that isn't a multi-target ancient spell will use ice blitz damage to avoid being completely off.

I would love to see other features/stats come into this plugin in the future, feel free to submit issues/suggestions & PRs. If you find a weapon that doesn't work, let me know as well.