Sign up
Old version of eaopt, will eventually be removed https://godoc.org/github.com/MaxHalfo…
Find file

This is gago, the old version of eaopt. The repository only exists so that existing projects importing gago won't break. Please use eaopt if you're starting a new project or switch to it if your project is using it.

The following example attempts to minimize the Drop-Wave function which is known to have a minimum value of -1.

All the examples can be found here.

In a nutshell, a GA solves an optimization problem by doing the following:

This description is voluntarily vague as to how the genetic operators are applied. It's important to understand that there isn't a single way of applying genetic algorithms. For example some people believe that crossover is useless and use mutation for generating new individuals. Genetic operators are applied following a model, a fact that is often omitted in introductions to genetic algorithms. Popular stopping criteria include

The two requirements for using gago are

The Genome interface is used define the logic that is specific to your problem; logic that gago doesn't know about. For example this is where you will define an Evaluate() method for evaluating a particular problem. The GA struct contains context-agnostic information. For example this is where you can choose the number of individuals in a population (which is a separate concern from your particular problem).

Let's have a look at the Genome interface.

The Evaluate() method assigns a score to a given genome. The sweet thing is that you can do whatever you want in this method. Your struct that implements the interface doesn't necessarily have to be a slice (which is a common representation). The Evaluate() method is your problem to deal with, gago only needs it's output to be able to function.

The Mutate(rng *rand.Rand) method is where you can mutate a solution by tinkering with it's variables. The way in which you should mutate a solution essentially boils down to your particular problem. gago provides some common mutation methods that you can use to not reinvent the wheel; this is what is being done in most of the provided examples.

The Crossover(genome Genome, rng *rand.Rand) method mixes two individuals. The important thing to notice is that the type of first argument differs from the struct calling the method. Indeed the first argument is a Genome that has to be casted into your struct before being able to apply a crossover operator. This is due to the fact that Go doesn't provide generics out of the box; it's easier to convince yourself by checking out the examples.

The Genome() method is there to produce independent copies of the struct you want to evolve. This is necessary for internal reasons and ensures that pointer fields are not pointing to same values memory addresses. Usually this is not too difficult implement; you just have to make sure that the clones you produce are totally independent from the genome they have been produced with. This is also not too difficult to unit test.

Once you have implemented the Genome you have provided gago with all the information it couldn't guess for you. Essentially you have total control over the definition of your problem, gago will handle the rest and find a good solution to the problem.

Classically GAs are used to optimize problems where the genome has a slice representation - eg. a vector or a sequence of DNA code. Almost all the mutation and crossover algorithms gago makes available are based on the Slice interface which has the following definition.

Internally IntSlice, Float64Slice and StringSlice implement this interface so that you can use the available operators for most use cases. If however you wish to use the operators which slices of a different type you will have to implement the Slice interface. Although there are many methods to implement, they are all trivial (have a look at slice.go and the TSP example.

Let's have a look at the GA struct.

You have to fill in the first set of fields, the rest are generated when calling the GA's Initialize() method. Check out the examples in presets.go to get an idea of how to fill them out.

Once you have implemented the Genome interface and instantiated a GA struct you are good to go. You can call the GA's Evolve method which will apply a model once (see the models section). It's your choice if you want to call Evolve method multiple by using a loop or by imposing a time limit. The Evolve method will return an error which you should handle. If your population is evolving when you call Evolve it's most likely because Evolve did not return a nil error.

At any time you have access to the GA's Best field which contains a Fitness field and a Genome field respectively indicating the overall best obtained solution and the parameters of that solution. Moreover, the GA'sCurrentBest field contains the best solution and parameters obtained by the current generation.

gago makes it easy to use different so called models. Simply put, a models tells the story of how a GA enhances a population of individuals through a sequence of genetic operators. It does so without considering whatsoever the underlying operators. In a nutshell, an evolution model attempts to mimic evolution in the real world. It's extremely important to choose a good model because it is usually the highest influence on the performance of a GA. 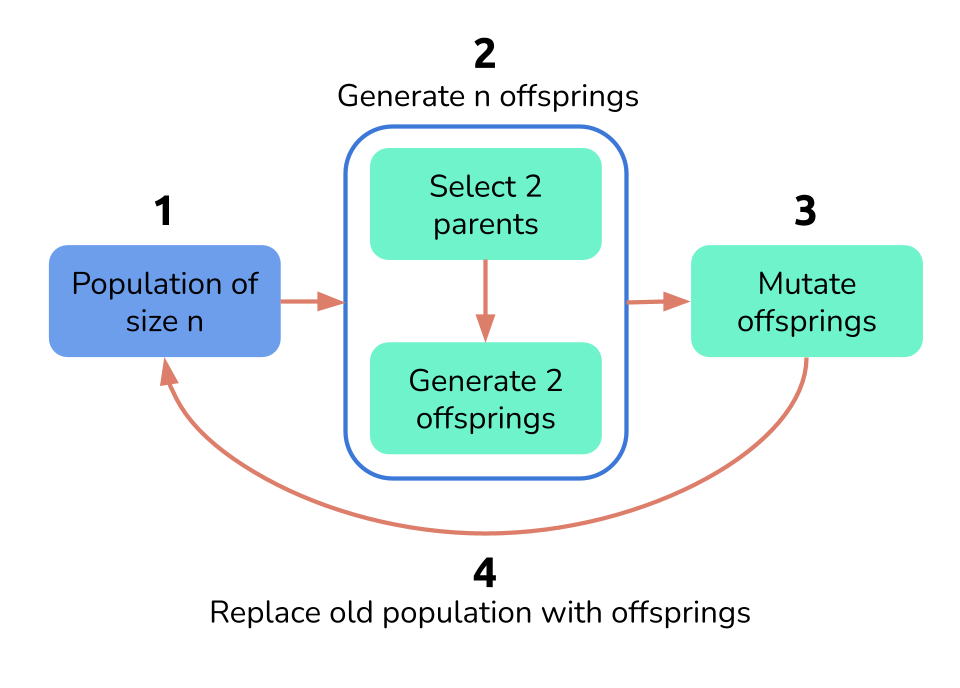 The steady state model differs from the generational model in that the entire population isn't replaced between each generations. Instead of adding the children of the selected parents into the next generation, the 2 best individuals out of the two parents and two children are added back into the population so that the population size remains constant. However, one may also replace the parents with the children regardless of their fitness. This method has the advantage of not having to evaluate the newly generated offsprings. Whats more, crossover often generates individuals who are sub-par but who have a lot of potential; giving individuals generated from crossover a chance can be beneficial on the long run.

Select down to size model

The select down to size model uses two selection rounds. The first one is similar to the one used in the generational model. Parents are selected to generate new individuals through crossover. However, the offsprings are then merged with the original population and a second selection round occurs to determine which individuals will survive to the next generation. Formally m offsprings are generated from a population of n, the n+m individuals are then "selected down to size" so that there only remains n individuals. 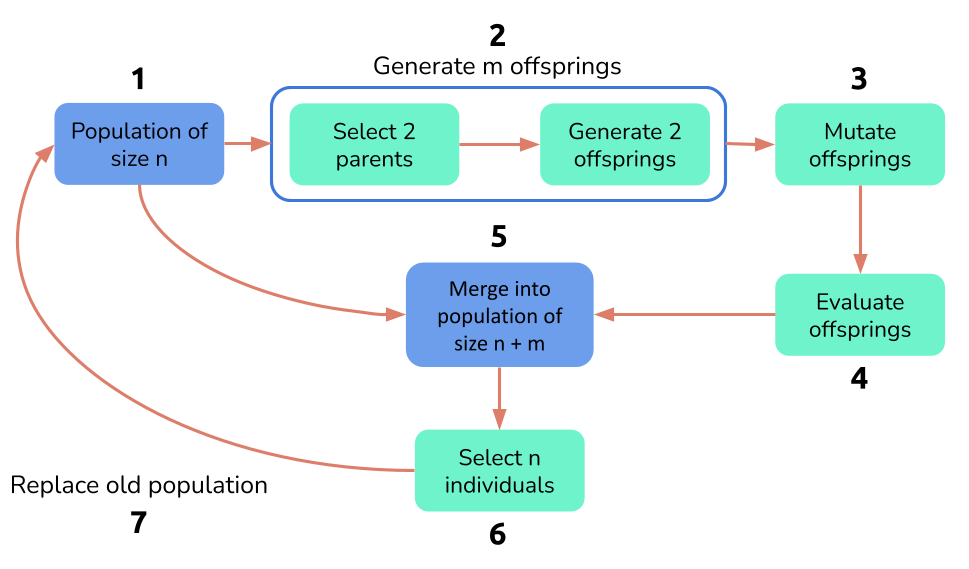 In the ring model, crossovers are applied to neighbours in a one-directional ring topology. Two by the two neighbours generate 2 offsprings. The best out of the 4 individuals (2 parents + 2 offsprings) replaces the first neighbour. 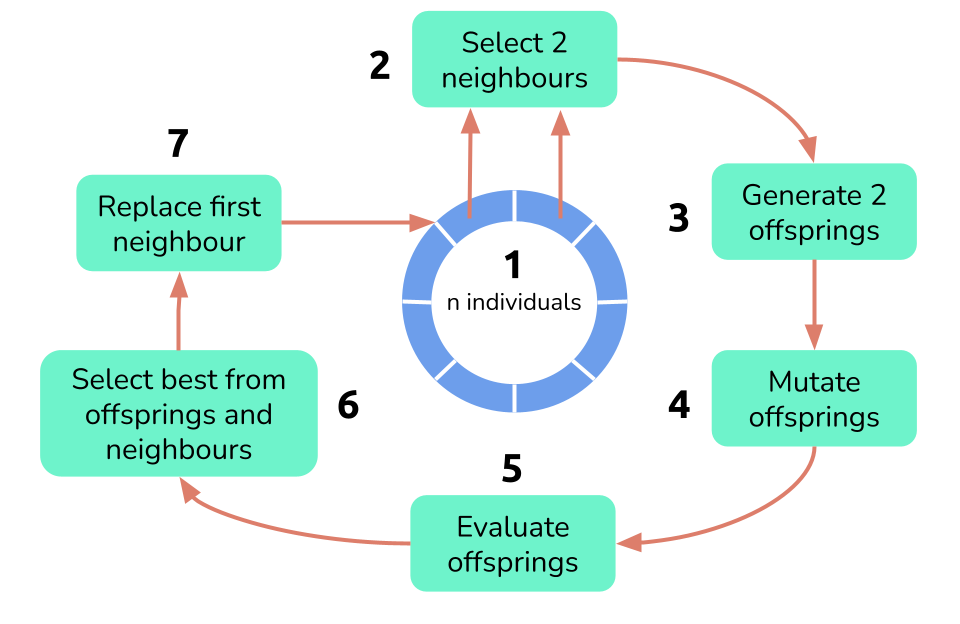 It's possible to run a GA without crossover simply by mutating individuals. Essentially this boils down to doing hill climbing because there is not interaction between individuals. Indeed taking a step in hill climbing is equivalent to mutation for genetic algorithms. What's nice is that by using a population of size n you are essentially running multiple independent hill climbs.

The purpose of a partitioning individuals is to apply genetic operators to similar individuals. In biological terms this encourages "incest" and maintains isolated species. For example in nature animals usually breed with local mates and don't breed with different animal species.

With gago it's possible to use speciation on top of all the rest. To do so the Speciator field of the GA struct has to specified. 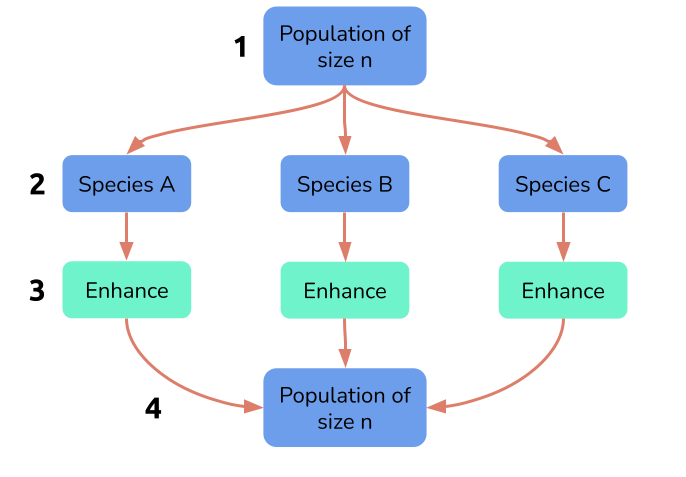 Multi-populations GAs run independent populations in parallel. They are not frequently used, however they are very easy to understand and to implement. In gago a GA struct contains a Populations field which contains each population. The number of populations is specified in the GA's Topology field.

With gago you can use multi-populations and speciation at the same time. The following flowchart shows what that would look like. 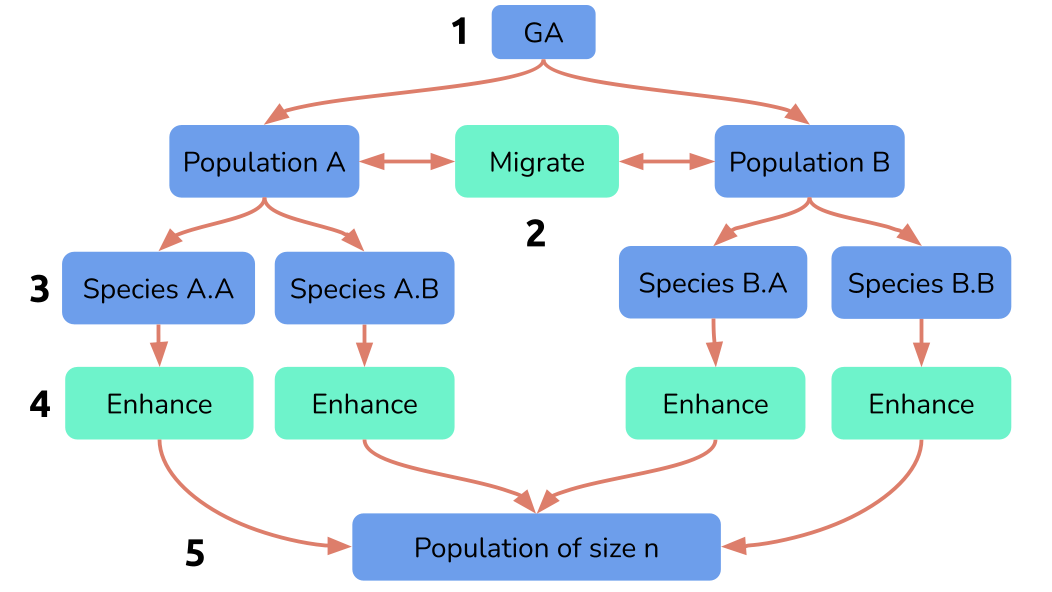 Some preset GA instances are available to get started as fast as possible. They are available in the presets.go file. These instances also serve as example instantiations of the GA struct. To obtain optimal solutions you should fill in the fields manually!

It's possible to log statistics for each population at every generation. To do so you simply have to provide the GA struct a Logger from the Go standard library. This is quite convenient because it allows you to decide where to write the log output, whether it be in a file or directly in the standard output.

If a logger is provided, each row in the log output will include

A note on parallelism

Genetic algorithms are famous for being embarrassingly parallel. Most of the operations used in the GA can be run independently each one from another. For example individuals can be mutated in parallel because mutation doesn't have any side effects.

The Go language provides nice mechanisms to run stuff in parallel, provided you have more than one core available. However, parallelism is only worth it when the functions you want to run in parallel are "heavy". If the functions are cheap then the overhead of spawning routines will be too high and not worth it. It's simply not worth using a routine for each individual because operations at an individual level are often not time consuming enough.

What if I don't want to use crossover?

Alas you still have to implement the Genome interface. You can however provide a blank Crossover method just to satisfy the interface.

Why aren't my Mutate and Crossover methods modifying my Genomes?

The Mutate and Crossover methods have to modify the values of the Genome in-place. The following code will work because the Vector is a slice; slices in Go are references to underlying data, hence modifying a slice modifies them in-place.

On the contrary, mutating other kind of structs will require the * symbol to access the struct's pointer. Notice the *Name in the following example.

Should I be using genetic algorithms?

Genetic algorithms (GAs) are often used for NP-hard problems. They usually perform better than hill climbing and simulated annealing because they explore the search space more intelligently. However, GAs can also be used for classical problems where the search space makes it difficult for, say, gradient algorithms to be efficient (like the introductory example).

As mentioned earlier, some problems can simply not be written down as closed-form expressions. For example tuning the number of layers and of neurons per layer in a neural network is an open problem that doesn't yet have a reliable solution. Neural networks architectures used in production are usually designed by human experts. The field of neuroevolution aims to train neural networks with evolutionary algorithms. As such genetic algorithms are a good candidate for training neural networks, usually by optimizing the network's topology.

How can I contribute?

Feel free to implement your own operators or to make suggestions! Check out the CONTRIBUTING file for some guidelines.