Much has changed in winapp2ool since v1.02 was released over a year ago!

Colorful menus - winapp2ool now uses colors to provide information about the status of toggle settings or the inability to run a module. The top winapp2ool settings menu option is always yellow, for example.

Some of those settings themselves are new features:
you can now optionally save your winapp2ool settings to and read them back from disk (optionally, save without reading or read without saving)
toggle the use of the Non-CCleaner file (previously a commandline arg "-ncc" which is still supported!)
View and save the internal winapp2ool log

Of course, if you modify your settings the "reset settings" option will make itself visible as usual. 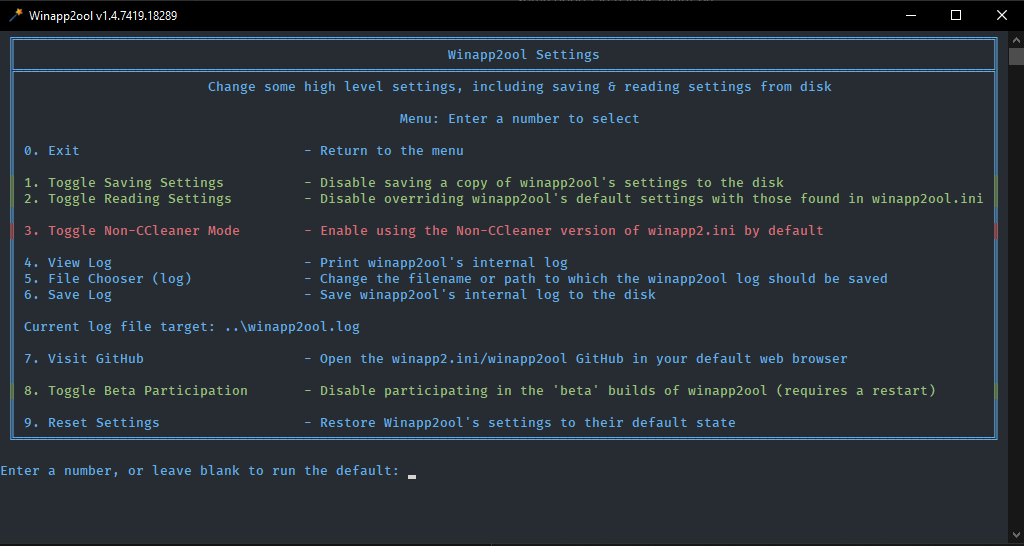 "Autocorrect" has been renamed to "Saving"

Many changes have been made to what and how the debugger detects as errors, you can see the most major changes in the Toggle Scan Settings screen, where you'll see a substantially larger number of options

Applications whose registry path contains the word "software" will no longer be improperly trimmed from the file (sorry, Foxit Reader!)

Diff no longer shows the full entry text by default. You can turn this back on by enabling "verbose mode"

New features:
VirtualStore locations have been removed from winapp2.ini and incorporated as a part of the trim process. These keys will now be inserted where necessary when you trim your file. Check it out!

Minefield:
A new module that is designed to hold concepts for modules before they're fully fledged ideas. Stuff in this module should be considered alpha and may not always/ever work, or ever become a full feature. You can access the minefield by typing "m" in the main menu.

Right now, the only real feature in Minefield is JavaMaker. It was designed with the help of Fred de Vies, the creator of JavaRA. It will attempt to generate a winapp2.ini entry for your system to clean up after the messy Java Runtime Environment installer.

You can now download several new files from the GitHub including the winapp2ool readme.

Commandline args have been simplified and allow for some more plaintext. This should hopefully make things less confusing in general! Check the ReadMe for more information.

Here's the 1.0 release of winapp2ool - finally! Many changes have been made since even the most recent (master) beta build (0.85)

The application has been majorly rewritten at very low levels in many places, but appears to be (mostly) bug free. If you find anything majorly busted, please file an issue!

Alongside winapp2ool's release comes its sister program, built for .NET 4.0 - winapp2oolXP. This should allow WindowsXP users to use the full suite of winapp2ool modules without getting blocked by that pesky .NET 4.6 requirement for downloading the executable.