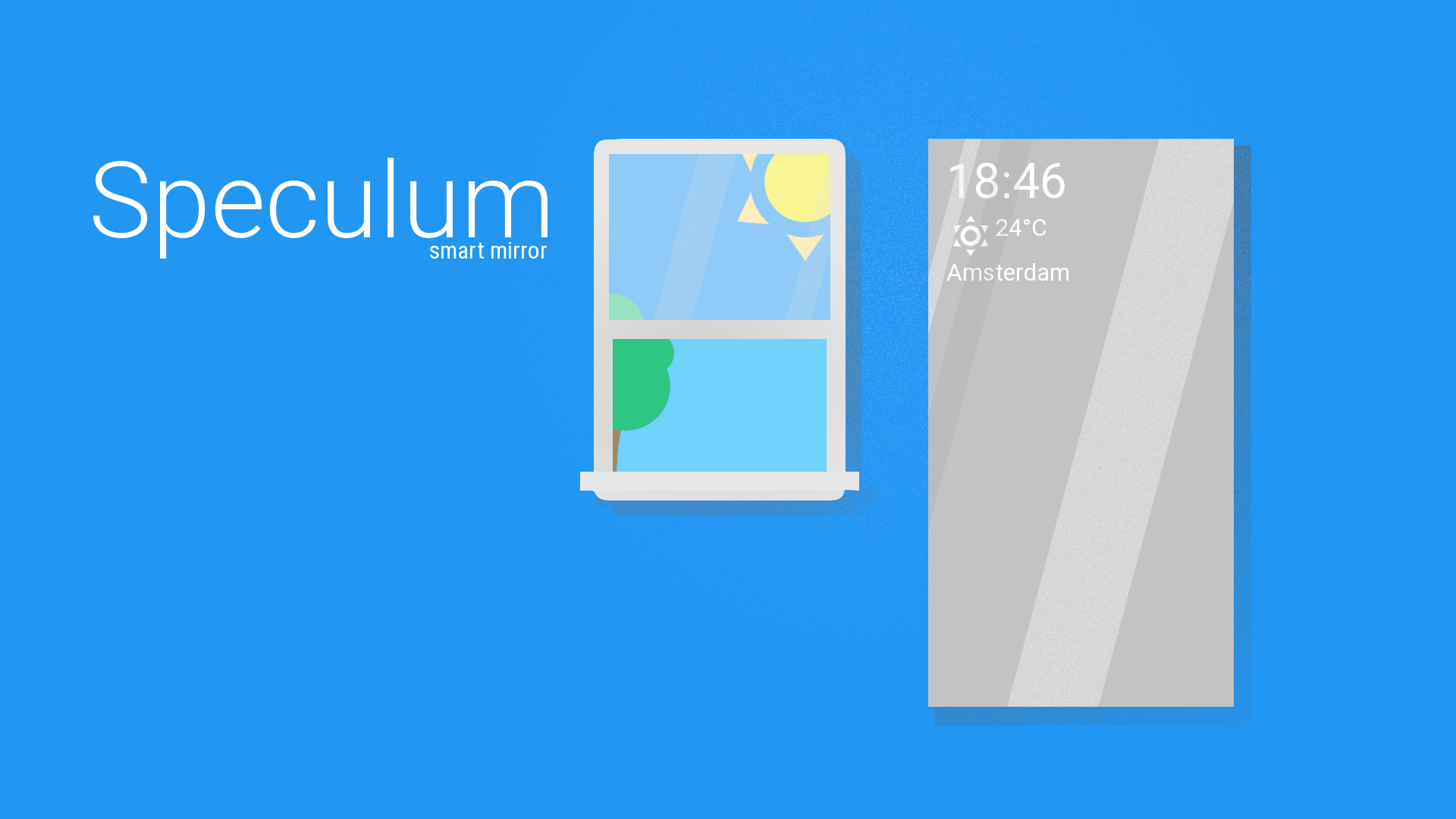 This is an Android application for a magic mirror. I had an old Nexus 7 (2012) lying around collecting dust and got the idea from HomeMirror by Hannah Mitt.

I started this project because I wanted to explore the MVP pattern for Android and Hannah's app did not have all the functionality I needed. Feel free to make this application look good on your own device (it was designed for the Nexus 7). Have any great ideas to make this more configurable or usable on more devices? Submit a pull request! 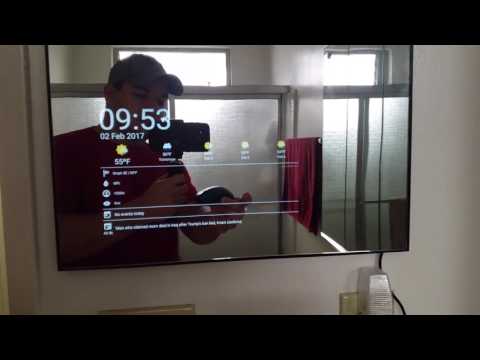 This is a setup by an user who combined Speculum with a motion detector app to turn the mirror on when you enter the room. 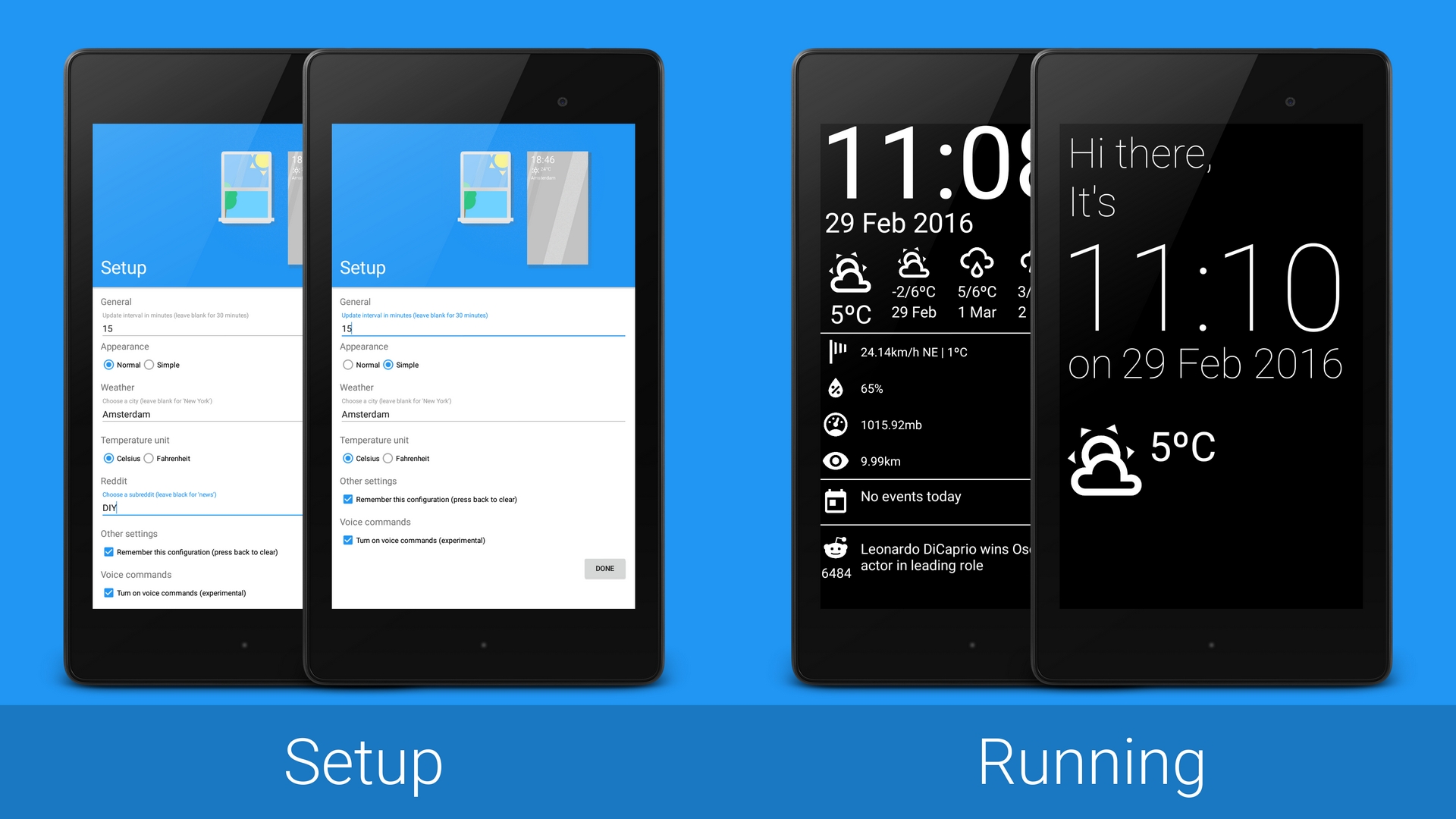 How do I get started

When you've turned on the voice command option in the setup screen you can talk to your device and make it update the data. To do this wake the device up by saying hello magic mirror, the device will then respond with hello there, how can I help you?. You can then speak commands, for example: say update and the data will refresh, if you don't say anything for a minute the device will go back to sleep by itself, you can also force this by saying go to sleep. There are also some other built in commands like tell me a joke which tells you a joke and show my location which pulls up a maps view of your home (if you did all the steps in the tutorial above). A small demonstration of the concept can be found below. 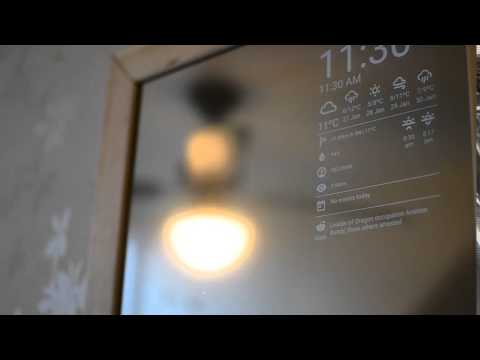 ###Add your own commands

Although this is a bit out of the scope for this document I had a hard time understanding and configuring the Pocketsphinx library so I figure this might come in handy when you want to add your own functions to this application. The SpeechRecognizer in this application has two modes; listen to one keyphrase (the wake up phrase) and listen to a list of keywords. The keyphrase to wake up the device is pretty straight forward, if you want to edit the phrase go to Constants.java, and change

The actual grammar file can be found in /assets/sync/commands.gram, you can change the command list or create a new file in that folder and pass it to the SpeechRecognizer at initialization. The grammar file must have this format:

The number between the // is the threshold for detecting the keywords, the general rule is; the longer the keyword the bigger the threshold (e.g. one-word phrases /1e-1/ and four-word phrases /1e-40/) but you can experiment with these values yourself. Also, every word in the commands you choose must exist in the dictionary file, which can be found in /assets/sync/cmudict-en-us.dict.

After you add your commands add them individually to Constants.java as well.

Now you set your SpeechRecognizer to listen to the commands list.

Whenever the SpeechRecognizer recognizes a command I pass the command for processing.

The way you make the SpeechRecognizer listen to the wake up phrase is similar to the commands method only this time do not pass a time to listen value as parameter.

After changing anything related to the commands reinstall the application wake up the device and enjoy!

###Thresholds More info can be found in the Pocketsphinx tutorial.

###Other languages and dictionaries I have not experimented with this, however it is possible to create your own dictionary file. Please refer to the CMU Sphinx tutorial.

How I made my mirror

Since pre-made two way mirrors are very expensive and hard to get by in my country (The Netherlands) I decided to make my own. I bought some polished transparent plexiglass (60x40cm and 4mm thick) and some two way mirror foil normally used on windows for privacy. I built a wooden frame around it and used some small pieces of wood to hold the tablet in place (I left an opening on the bottom for the charger and on the top to expose the microphone). I then painted the back of the plexiglass black and that's it!