Malsys is highly modular L-system processing library with web interface and gallery. It supports advanced L-system features like context rewriting or parametric L-systems as well as some unique features like rewriting symbol as another L-system. Malsys is able to generate output as bitmap image, SVG (vector graphics) image, 3D WebGL scene, ASCII art, or even PNG animation (sorry, no gifs, yet)!

The main idea behind the syntax design was understandability. Someone who knows L-systems should read the code without problems and someone who do not know L-systems can learn quickly. This is why I decided to make it keyword driven (a little like SQL).

See articles in the help section to learn more about the syntax. Or just open the formal grammar file that is used to generate the parser (it's in Malsys.Parsing project folder :)

Compilation of this project might be a little bit tricky because of the dependency on the F#'s Power pack that has to be installed in the machine. Also ASP.NET MVC project might give you hard time but you can unload it (and don't compile it).

However, primary intention of releasing this source code was to share some cool solutions and tricks with the world. Ho give you some idea I will try to list interesting features below.

Malsys is quite large project. I think that it is well written and some features are quite cool but it is hard to find them in the code. Below is short description of all main parts of the project together with tips for good stuff.

Modular compiler - a bunch of classes with soft dependencies put together with Autofac dependency resolver. The main class responsible for the compilation is CompilersContainer.

Usage of F#'s immutable data structures (mainly FSharpMap) for evaluation of expressions. This decision was made to simplify scoping. Saving state is as simple as saving reference. Any change of state will produce new instance. This feature is often used in the library. Check out the ExpressionEvaluatorContext class.

All the L-system processing code is in this namespace. The ProcessManager class is the boss here. It can parse, compile, end evaluate L-systems from string.

In this namespace are all the default components. All the juicy stuff about processing of the L-systems is located here.

Out of all the components I would like to point you to the rewriter class SymbolRewriter, I think it's pretty cool. I have not seen implementation out there that handles all the context rules correctly (without depth restrictions). The only weird decision was to keep L-systems in the string, not as a graph so the graph is created on the fly every time to evaluate context rules efficiently.

Also, the LsystemInLsystemProcessor class used to interpret an L-system as a symbol is really neat!

Components in Malsys are connected based on the input from user. Thus, reflection is used to obtain all the information about components.

The cool part is that the doc comments can be obtained, too. I have created some custom tags in the doc comments of components that are interpreted in special way and can help user. For example, look at the documentation about components online or in my thesis (Appendix J) - all human readable, useful, and automatically generated.

This namespace contains standard library for the Malsys. All functions, operators, and other predefined stuff is here. Creation of new operator of function is as simple as addition of one property to the an appropriate class. Everything else is automatic (reflection baby! :). Check out StdConstants, StdOperators, and StdFunctions classes.

This namespace contains all data structures for compiled and evaluated elements.

Source code printers are doing the opposite of compilation. The CanonicPrinter class is very crucial because it prints the source code in canonical way. This is used for storing the L-systems in the DB.

This is the parser of Malsys syntax. It is written using FsLex and FsYacc tools - the same tools that are used by F# compiler. FsYacc is LALR parser generator and it is quite simple to write the grammar for it. The problem with LALR parsers is error recovery that is quite poor in Malsys.

The grammar has around 600 lines and parsing is one-liner. The hard work is done in compilation step where F# tools generate the lexer and parser.

This namespace is in separate project with stuff that is common to all other projects. This is again to avoid circular dependencies.

Database of Malsys contains 13 tables and it was created using Entity Framework DB first. Nowadays, I prefer code first approach tough. Tables about the discussion are currently unused because I have switched to Disqus.

Malsys saves all processed L-sytems to the DB and it also tracks which L-systems were created from which. So if you copy-paste example from the web and then keep changing it, it is possible to search the whole evolution sequence. This feature was implemented to allow search for interesting L-systems because in general the longer the chain the more interesting the L-system can be. 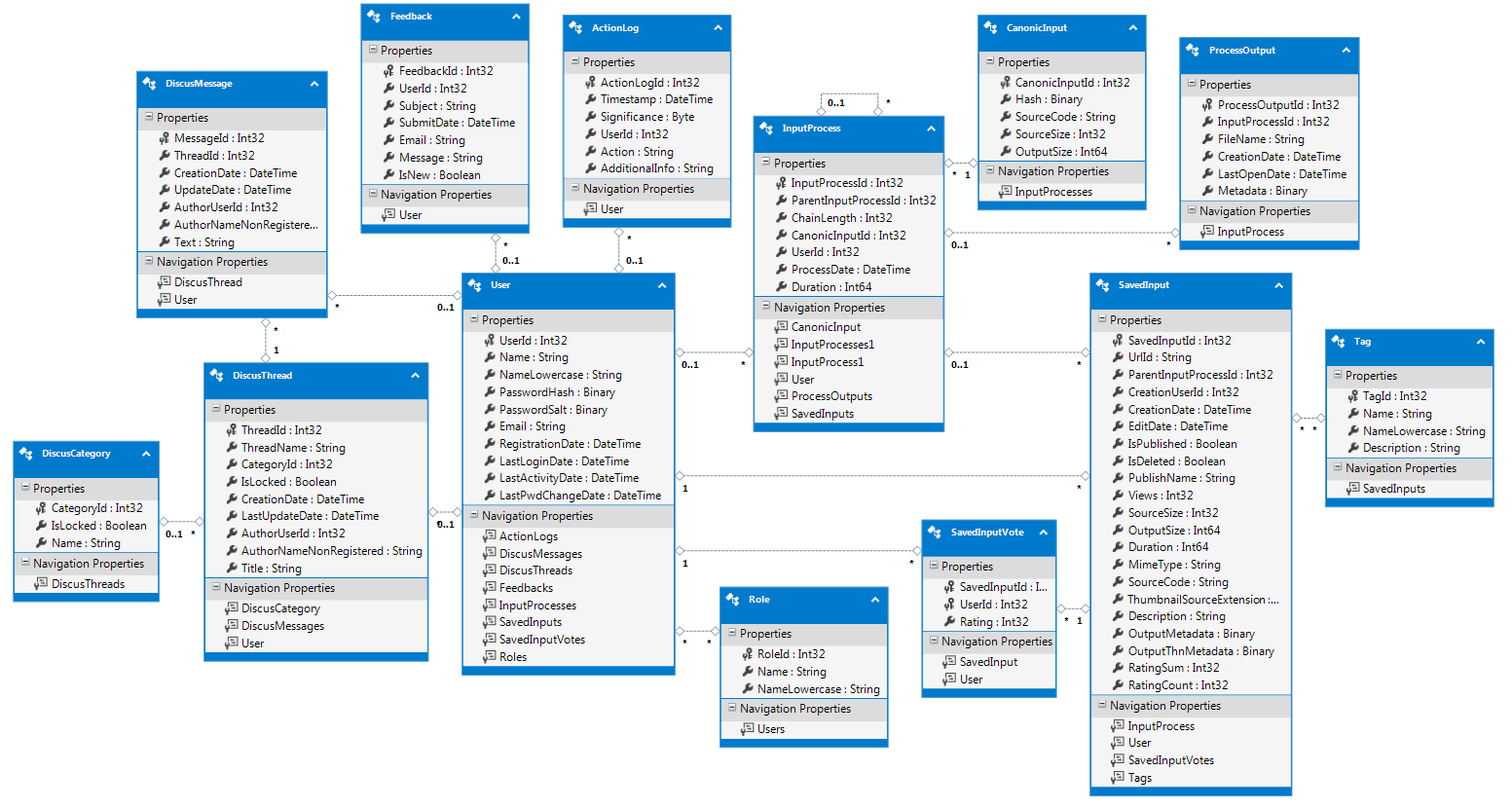 Documentation is written with help of classes in Malsys.Web.ArticleTools. All the articles are written directly as .cshtml files. This is faster and avoids a need for some CMS.

The cool thing is that all examples are automatically processed by the L-system engine! This dramatically simplifies writing and also there are no mistakes in examples. Some documentation pages are automatically generated using reflection and custom doc-comments on classes as described in Malsys.Reflection.

One hidden feature of the documentation is that it can generate LaTeX! I have used it to generate some appendices to my thesis. When you look at PredefinedController you can find actions ComponentsLatex and ConfigurationsLatex. Those actions should work in the live version of the web.