The system proposed in this project can be used for the remote monitoring of patients with heart failure. It also includes the analysis of the heart signals.

The aim of this project is to design and implement a system for the remote monitoring of a patient that suffers from heart failure. This will simplify the way patients record heart measurements and check on their health, which will enable them to learn about their condition by looking at their statistics visualised in the user interface of the mobile application. The recordings will also be stored on a storage service in the back-end of the system, which will then be used to visualise the heart data on a web portal. This will allow clinicians to effectively analyse the recordings and directly message patients in case of emergency. The web portal will process the heart signals by applying different methods and algorithms to detect any cardiac abnormalities. Furthermore, healthcare institutions will be able to conduct valuable research from the data that has been supplied through the back-end, which can considerably reduce the number of heart failure cases in the future. This project, therefore, aims to solve a real-world problem by making a significant impact in the healthcare industry and thus potentially saving lives in the future.

Screenshots of the UI 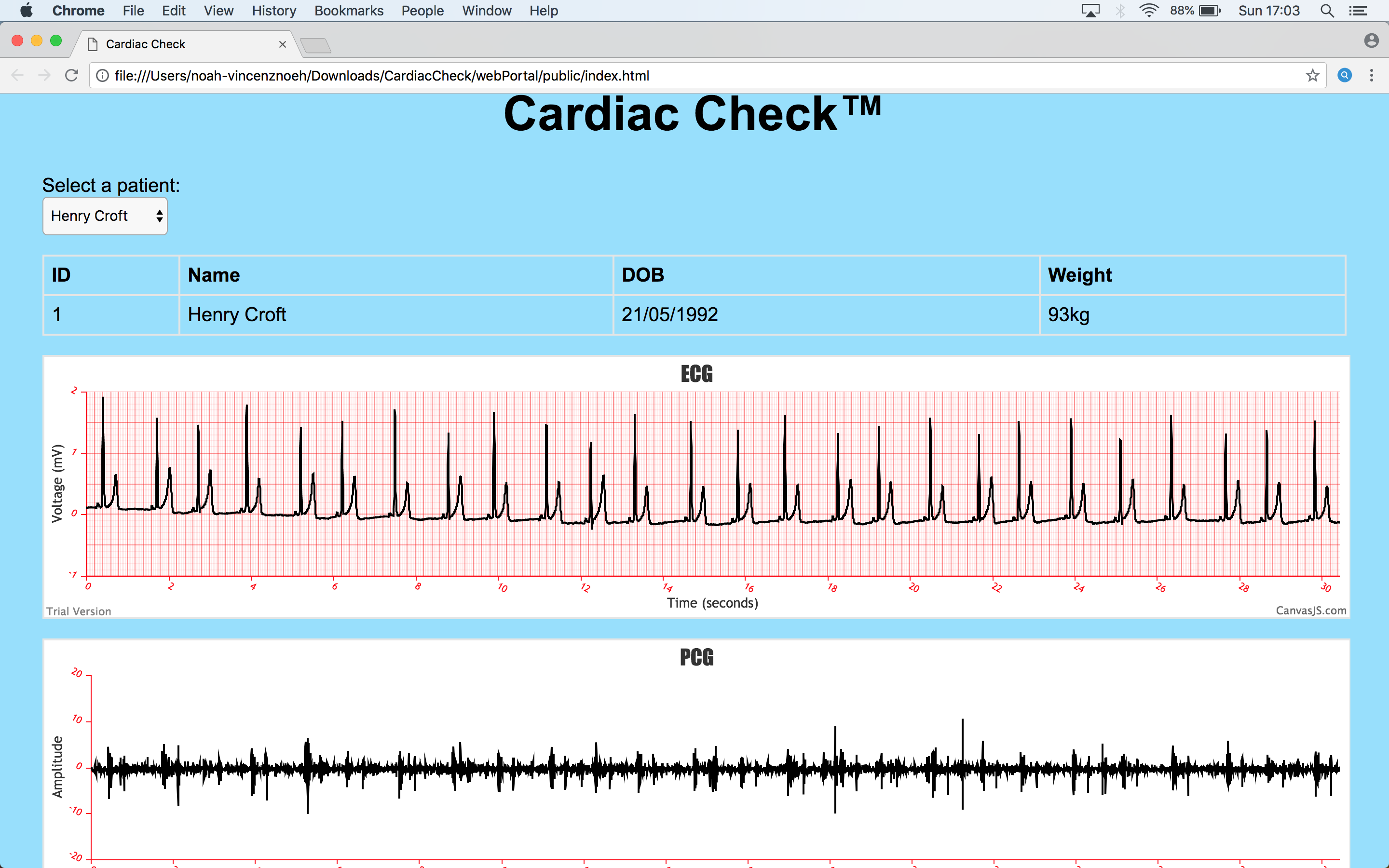 These instructions will need to be taken in order to run the mobile application and the web portal. First of all, the project zip folder needs to be decompressed. This can be done by simply double-clicking the file. This will fully decompress the file and create a folder named CardiacCheck in the current working directory. Inside CardiacCheck are two folders: mobApp and webPortal.

In order to run the web portal the folder CardiacCheck/webPortal/public must be opened. This contains a file called index.html. This can be opened on any web browser, but it was developed using Chrome, which logs useful details of the signal processing to the console, such as the positions of each R-Peak. If Google Chrome is used then Chrome's same origin policy needs to be disabled first. This is done by opening the terminal and typing the following command (Note that no Google Chrome instance can be open at this time).

For OSC the following command needs to be run:

For Windows/Linux the following command needs to be run:

The html file can now be opened to run it locally with Google Chrome. The Google Chrome console can be opened by pressing Cmd+Opt+J on OSC and Ctrl+Shift+J on Windows/Linux when the browser is active.

The CardiacCheck/webPortal/public folder contains a folder called RPeakAlgorithmTesting. This should be opened and again this folder contains a file called index.html, which can be opened in the same way as the other index.html file above. This html file simply uses the R-Peak detection algorithm and reads the .txt files inside the folder to plot a single graph and log the R-Peaks of that signal to the console (on Google Chrome). The default .txt file that is being tested is 100.txt, but this can be changed to any .txt file included in that directory by changing line 21 (rawFile.open("GET", "100.txt", true);) of the index.js file.

The index.js file in CardiacCheck/webPortal/public relies on npm. If any of the files in this directory are modified then these changes need to be added in order to become visible. This requires Node.js and npm to be installed on the machine. The following steps need to be taken to install them:

Now whenever the source code is modified then ...

... must be called in the terminal in the CardiacCheck/webPortal/public directory for the changes to be added and to become present.

This also requires Node.js and npm to be installed on the machine, so the steps above need to be taken first. Following this, in CardiacCheck/webPortal/public call the following commands on the terminal:

This will install jasmine and run the tests located inside the spec folder and print out the results.

The mobile application was build on XCode implemented in Swift 3. In order to run the application XCode needs to be installed on the machine. This can only be download for MacOS and the download link can be retrieved on Apple's website. This also requires the downloader to have an Apple ID. Once XCode has been successfully installed, CardiacCheck/mobApp can be opened, which contains a file called mobApp.xcworkspace. This is the file that needs to be opened using XCode to run or test the application. Once in XCode, the application can be either tested or run by navigating to the Product menu > Run or Product menu > Test (Note that an iPhone iOS simulator should be selected).