A RubyMotion pretty printer for iOS and Mac.

instead of using p or puts, use mp to log your debug values to the RubyMotion REPL.

Colors don't show up correctly on github, so these are just examples of what you can do with motion_print. Try it out for yourself to see the more colorful output! 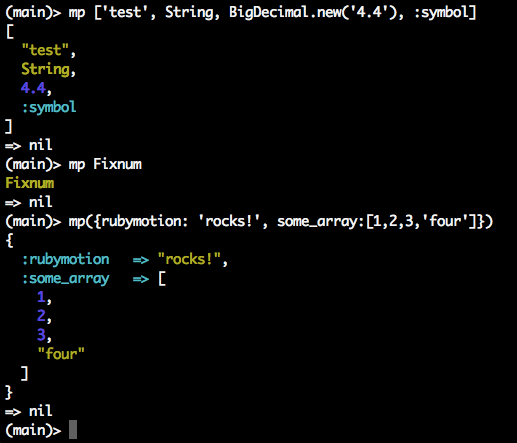 Woah! This is great! How can I make my gem support motion_print?

motion_print supports other gems (or even your own classes in your project ) with an opt-in feature. All you have to do is implement the motion_print method in your class (with option mp and options arguments). You can see an example implementation of this in the specs.

Ruby comes with some great methods for method introspection. These methods look great in motion_print.

mp __method__ will echo the name of the method from which you called motion_print.

mp caller will trace back up the call stack, so you can see how a method got called.

You can force a color of the output if you want like this:

I used to be a big fan of awesome_print_motion. Then I ran the Instruments allocations profiler on an app that had a big loop with lots of ap statements. You should have seen the graph increase exponentially over a few seconds. Then I took a look at the actual awesome_print_motion source code. It's basically a direct port of the awesome_print gem and just modified to "work" with RubyMotion. There's all kinds of core class extensions and crazy threading things going on... way too complex for my needs to output a pretty version of an object or hash or array.

That, coupled with the fact that the developer of awesome_print_motion doesn't seem responsive to issues or pull requests, I decided to roll my own debugging tool specifically written for RubyMotion development.

awesome_print_motion is 793 lines of code and extends Array, Kernel, Class, and Object, and is not tested.

motion_print is 174 lines of code, adds one method each to String, and Kernel, and is fully tested (run rake spec to see the tests pass).

motion_print is available under the MIT license. See the LICENSE file for more info.

A RubyMotion pretty printer for iOS and Mac.