CC-BY-4.0 license
19 stars 5 forks
Star
Notifications
This commit does not belong to any branch on this repository, and may belong to a fork outside of the repository.
1 branch 0 tags 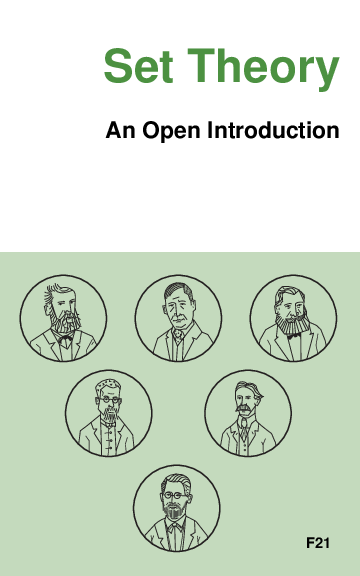 Set Theory: An Open Introduction is a brief introduction to the philosophy of set theory. It is written for students with a little background in logic, and some high school mathematics. By the end of this book, students reading it might have a sense of:

This repository/directory only contains the LaTeX files and illustrations needed to typeset the textbook Set Theory, which in turn requires the Open Logic Text. Most of the material making up the text comes from Tim Button's Open Set Theory.

You can download the PDF from the Open Logic builds site.

You can order a hardcopy of the Fall 2021 edition from Amazon [US|CA|UK|DE|AU].

To install and compile:

If you use git, this should do it:

Inside courses/set-theory, you can now compile:

or just # make if you have latexmk installed. (You'll also have to do bibtex settheory-screen for the bibliography.)

The file settheory-screen.tex produces a color version of the text with smaller margins for screen reading.

The file loads settheory.tex, which contains the actual material. It in turn includes other files, most of them from the OpenLogic repository. So you won't get a complete book unless you download into the right subdirectory of and compile from there.