This project provides the Twitter Bootstrap rendering technology to XPages. The goal is to enable this new rendering through a dedicated theme, without having to change the application pages. All you have to do is to set the application theme to 'bootstrapv2.3.1' in Domino Designer. Voila!
The theme covers all the regular XPages controls, as well as the ones delivered as part of the extension library and generally rendered using OneUI (application layout, data view...). 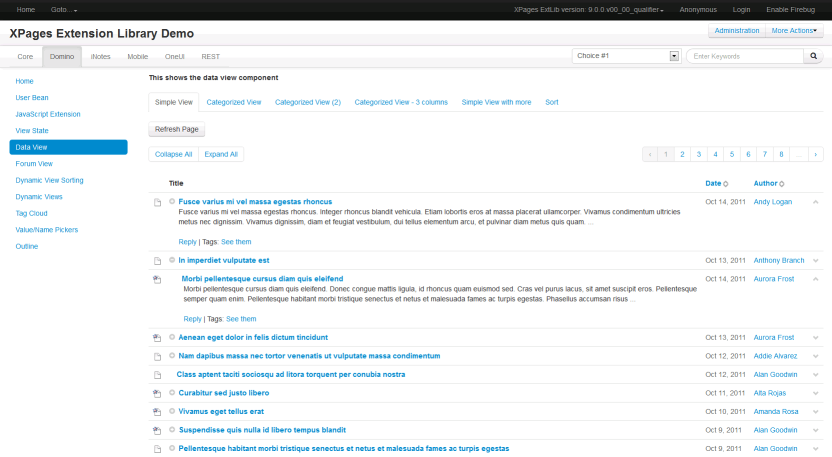 Bootstrap4Xpages is defined as a custom XPages library and delivered as an Eclipse update site. As of today, it is only composed of one plug-in, but this might evolve in the future. In order to be consumed, it has to be installed in both Domino Designer and the Domino server, like any other XPages extension library. For more information, see: XPages Extensibility API Developers Guide

The library provides the following features:

The following open source components had been legally cleared out and are delivered as part of the library:

The theme has been successfully applied to several existing demo databases. The extlib demo database has some hard coded OneUI styles that should be replaced to get a complete Bootstrap look and feel:

This library is delivered under the Apache 2.0 license. A compiled, ready to use version, is available from the OpenNTF web site at: http://bootstrap4xpages.openntf.org/

The components provided by the library are currently not matching the IBM standard in term of localization (support for multiple languages, bibi support) or accessibity.

Well, many things can be done! Now that the bulk of the code is there, I'm seeking help from the community to extend this library, or build on top of it. Feel free to fork the code and create your additions. Then get them integrated within the core project, if it makes sense. We'll accept external contributions to this library after having the code properly reviewed.
Bellow is a initial set of ideas, but please come with yours!
As you can see, there is enough for an army to work on.