A simple, reliable transport-layer extension on top of UDP.

The Reliable As TCP (RAT) protocol is a connection-oriented transport-layer extension on top of UDP that extends UDP to provide a similar level of reliability as TCP. Like TCP, it supports window-based flow control and byte-stream semantics, but focuses on implementing reliability as simply as possible

Included below are short answers to common questions regarding reliable transport, which will be expanded in further detail later in the specification.

RAT is a pipelined protocol, and employs selective repeat to handle retransmission of lost segments.

RAT handles retransmission by the use of ACK and NACK overhead messages, where the protocol will alert the sender of each segment which was not received. The sequence numbers themselves will be sent in a single NACK message if possible, or in as few messages as possible - either way as part of the message payload.

If a segment is received with a sequence number which has already passed, the segment is discarded.

RAT segments include a sequence number, which tracks the order that they were sent from a sender (and the order they should be reassembled).

All RAT streams are uni-directional at any given point in time. Client and servers can send and receive on a single stream, but these operations cannot occur at the same time. However, additional connections can be opened (with different stream IDs) which can allow for bi-directional data transfer in parallel.

The full RAT header is 8 bytes in size, and is built on top of a UDP datagram:

Base methods and values (such as service selection, payload length, and UDP checksum) are handled by the encompassing UDP header:

The length field is a 16-bit field that specifies the total length, in bytes, of the UDP header and payload.

The checksum field is a 16-bit field that is used for error-checking of the UDP header and payload.

The stream ID is temporally unique 16-bit identifier used to uniquely identify an active data stream at any moment in time. Stream IDs are server-significant, and are assigned and used by the server to uniquely identify a connection stream of a specific client. In the initial connection from client to server, this value is set to 0 by the client until the server assigns one.

A sequence number is an 16-bit number that identifies the current segment in a RAT connection stream.

The flags field is a 8-bit series of flag bits which identify specific RAT overhead message types. Field bits are specified in order below, and are also generally ordered from most-to-least used.

If this bit is set, this message is an acknowledgement that a message or series of messages were receieved successfully.

If this bit is set, this message is an acknowledgement that a message in a window was never recieved.

If this bit is set, this message includes a request to change the current window size.

If this bit is set, this message identifies that the next sequence number will start again at 0.

If this bit is set, this message is a request to connect a client to a server.

If this bit is set, this message is a request to disconnect a client from a server.

The last flag bit is reserved for future use.

This is an 8-bit value which specifies the amount of additional 16-byte words of overhead this RAT segment needs to store in the payload relating to one or more set flags. In general, if this value is anything other than 0, the RAT message data is carried in lieu of a data payload.

Some examples of this additional data are:

A field that simply stores the sum of the flags and data offset fields as a 3-bit unsigned integer (overflow is expected). If the value in this field does not match the 3-bit sum of the fields, an error is detected and the segment is discarded.

A RAT API implementation must implement the following methods:

Directs the socket to follow or ignore keep-alive messages. The default is to allow keep-alives. This setting can be set on individual client sockets returned from accept() or for all clients on a server socket by setting it on the server socket instead.

Sends a byte-stream from client to server or from server to client.

Returns the byte-stream result of reading buffer_size bytes from an established socket.

Attempts to cleanly close a socket and shut down the connection stream. Sockets which are closed should be discarded, as they cannot be reopened.

The state on the server following a call to listen(address, port, num_connections) on the server. This server is currently listening for connections.

The state on the client following a call to connect(address, port, keepalive_time) on the client. This client has opened its socket, and has sent a HLO message to the server to attempt to establish a connection.

The state on the server after its opened socket has received a HLO message from a client. This server will respond with a ACK, HLO message, containing a unique stream ID assigned to the client by this server.

The state on the client or server after its socket has received a BYE message from the other end on an established socket. The client or server will continue to send data to complete its current window, and will send a ACK, BYE message upon receiving the last ACK from the other end at the conclusion of the final window. Once sent, this starts the RAT_BYE_TIMEOUT timer, after which the socket transitions to the SOCK_CLOSED state.

The state on the client or server following an ACK, BYE response from the server or the expiration of a RAT_BYE_TIMEOUT timer. This socket is closed and cannot be used to send data or re-establish a connection and should be deallocated from memory.

RAT maintains two main timers to handle cases where it does not receive an expected response from the other side. The exact values of these timers are based on how the RAT protocol is implemented on the client or server.

A timer started after the receipt of the last message. This timer resets when any message is received (such as data or keep-alive messages). When it expires, the socket transitions immediately to the SOCK_CLOSED state.

A timer started after the receipt of the last message in the SOCK_BYESENT or SOCK_BYERECV states (which can include a BYE message itself). This should be less than the RAT_REPLY_TIMEOUT timer. When it expires, the socket transitions immediately to the SOCK_CLOSED state.

A visualization of the above states is included below.

A RAT protocol connection negotiation. Once negotiation is complete, both client and server sockets will be in the SOCK_ESTABLISHED state, ready to send data. 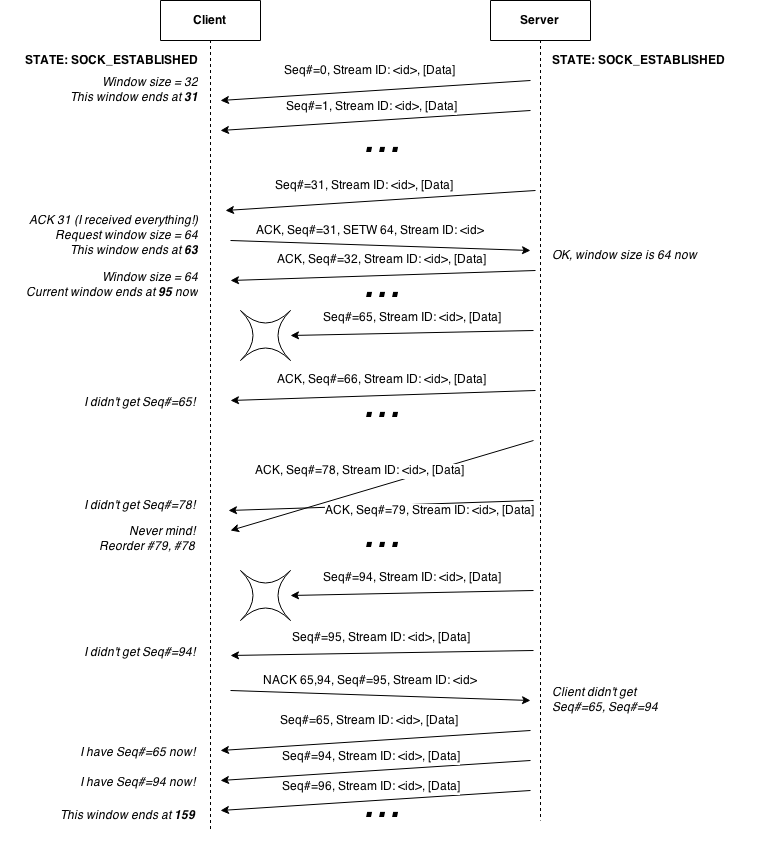 A RAT protocol data transfer timeline. RAT supports reordering of out-of-order segment delivery, as well as selective retransmission of lost segments as part of the next window.

A RAT protocol connection-close negotiation. Once a client enters the SOCK_BYESENT state, the socket is half-open; a client may continue to receive data, but can no longer send (except for RAT overhead messages, such as acknowledgments).

An equivalent representation of the above diagrams in a finite-state machine format is detailed below. A RAT protocol finite-state machine. Note that expiration of the RAT_REPLY_TIMEOUT timer at any point in the machine except SOCK_UNOPENED, SOCK_BYESENT, SOCK_BYERECV, and SOCK_CLOSED will result in a transition to the SOCK_CLOSED state.

A simple, reliable transport-layer extension on top of UDP.