VisualDL, a visualization analysis tool of PaddlePaddle, provides a variety of charts to show the trends of parameters, and visualizes model structures, data samples, histograms of tensors, PR curves , ROC curves and high-dimensional data distributions. It enables users to understand the training process and the model structure more clearly and intuitively so as to optimize models efficiently.

Browsers supported by VisualDL are:

VisualDL natively supports the use of Python. Developers can retrieve plentiful visualization results by simply adding a few lines of Python code into the model before training.

The high-level design of API makes it easy to use. Only one click can initiate the visualization of model structures.

By Integrating into PaddlePaddle and related modules, VisualDL allows developers to use different components without obstructions, and thus to have the best experience in the PaddlePaddle ecosystem.

Please note that Python 2 is no longer maintained officially since January 1, 2020. VisualDL now only supports Python 3 in order to ensure the usability of codes.

VisualDL stores the data, parameters and other information of the training process in a log file. Users can launch the panel to observe the visualization results.

The Python SDK is provided at the back end of VisualDL, and a logger can be customized through LogWriter. The interface description is shown as follows: 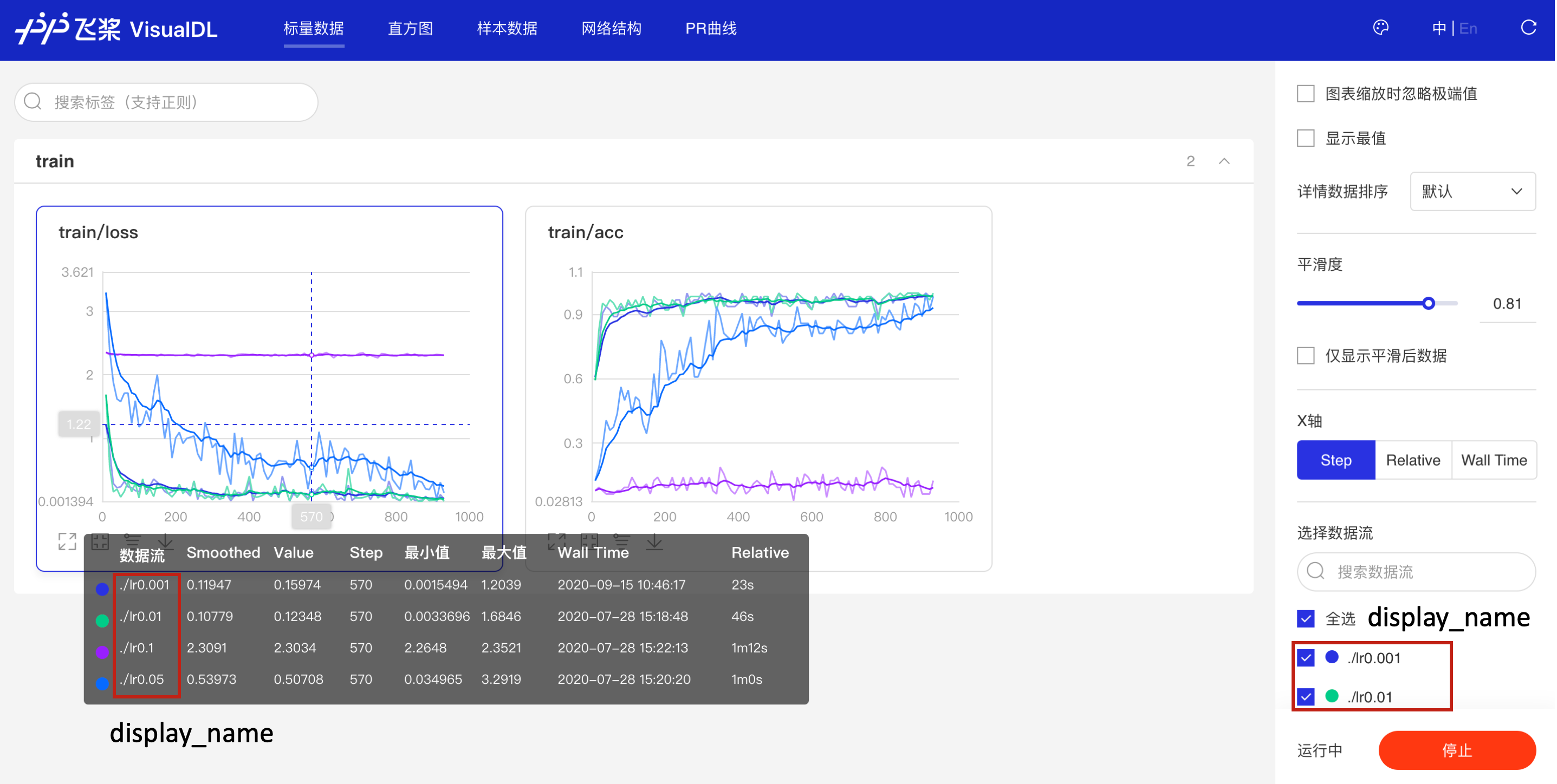 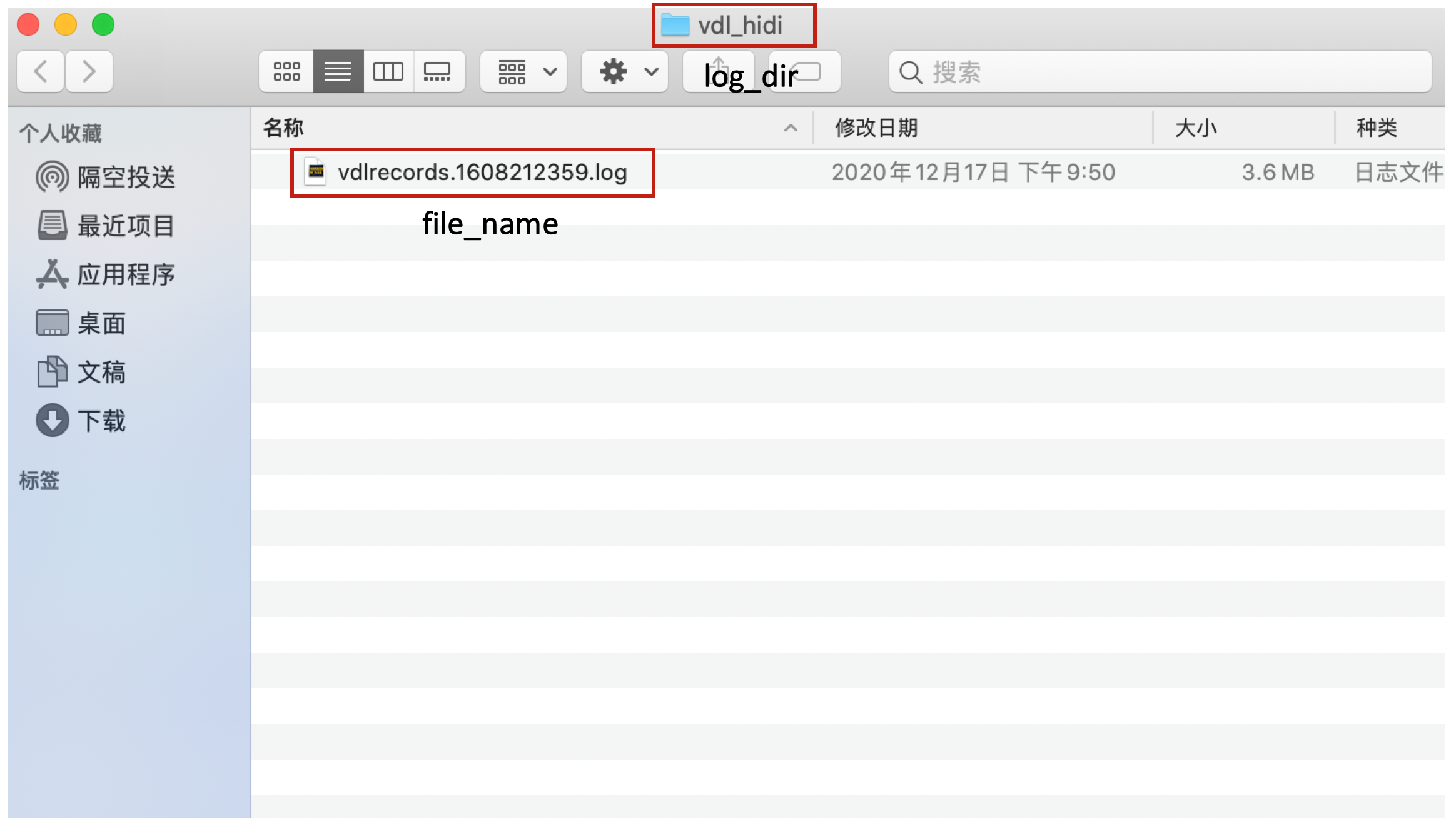 In the above example, the log has recorded three sets of scalar values. Developers can view the visualization results of the log file through launching the visualDL panel. There are two ways to launch the log file:

Use the command line to launch the VisualDL panel：

To visualize the log file generated in the previous step, developers can launch the panel through the command:

Developers can start the VisualDL panel in Python script as follows:

Please note: since all parameters are indefinite except logdir, developers should specify parameter names when using them.

The interface parameters are as follows:

To visualize the log file generated in the previous step, developers can launch the panel through the command:

After launching the panel by one of the above methods, developers can see the visualization results on the browser shown as blow: 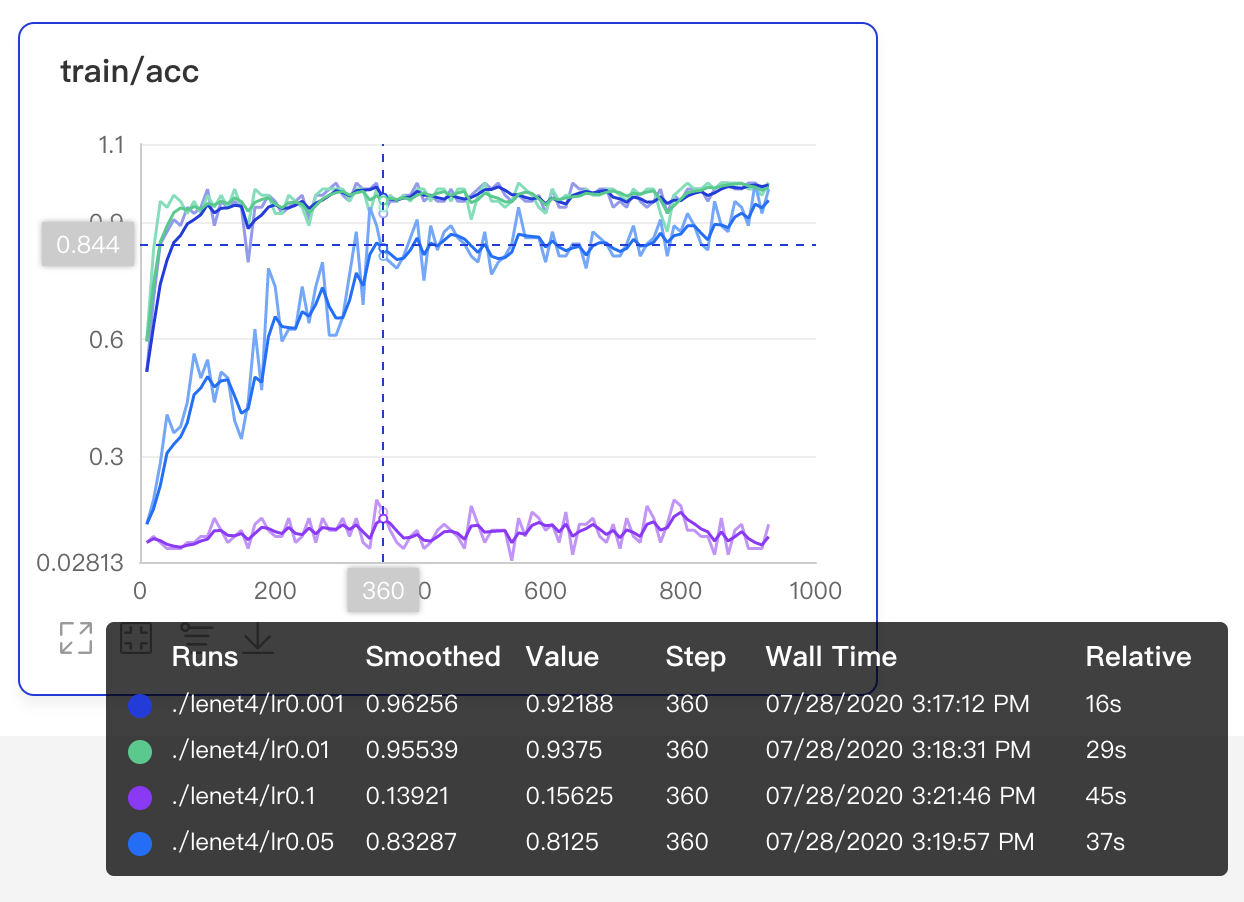 If there is a log file named vdlrecords.1605533348.log in the directory of ./log, we can retrieve the data under the 'loss' tag in the scalar by:

The result will be a list shown as below：

Scalar makes use of various charts to display how the parameters, such as accuracy, loss and learning rate, changes during the training process. In this case, developers can observe not only the single but also the multiple groups of parameters in order to understand the training process and thus speed up the process of model tuning.

After the launch of VisualDL Board, the LogReader will continuously record the data to display in the front-end. Hence, the changes of parameters can be visualized in real-time, as shown below:

Developers can compare multiple experiments by specifying and uploading the path of each experiment at the same time so as to visualize the same parameters in the same chart.

Audio aims to allow developers to listen to the audio data in real-time during the training process, helping developers to monitor the process of speech recognition and text-to-speech. 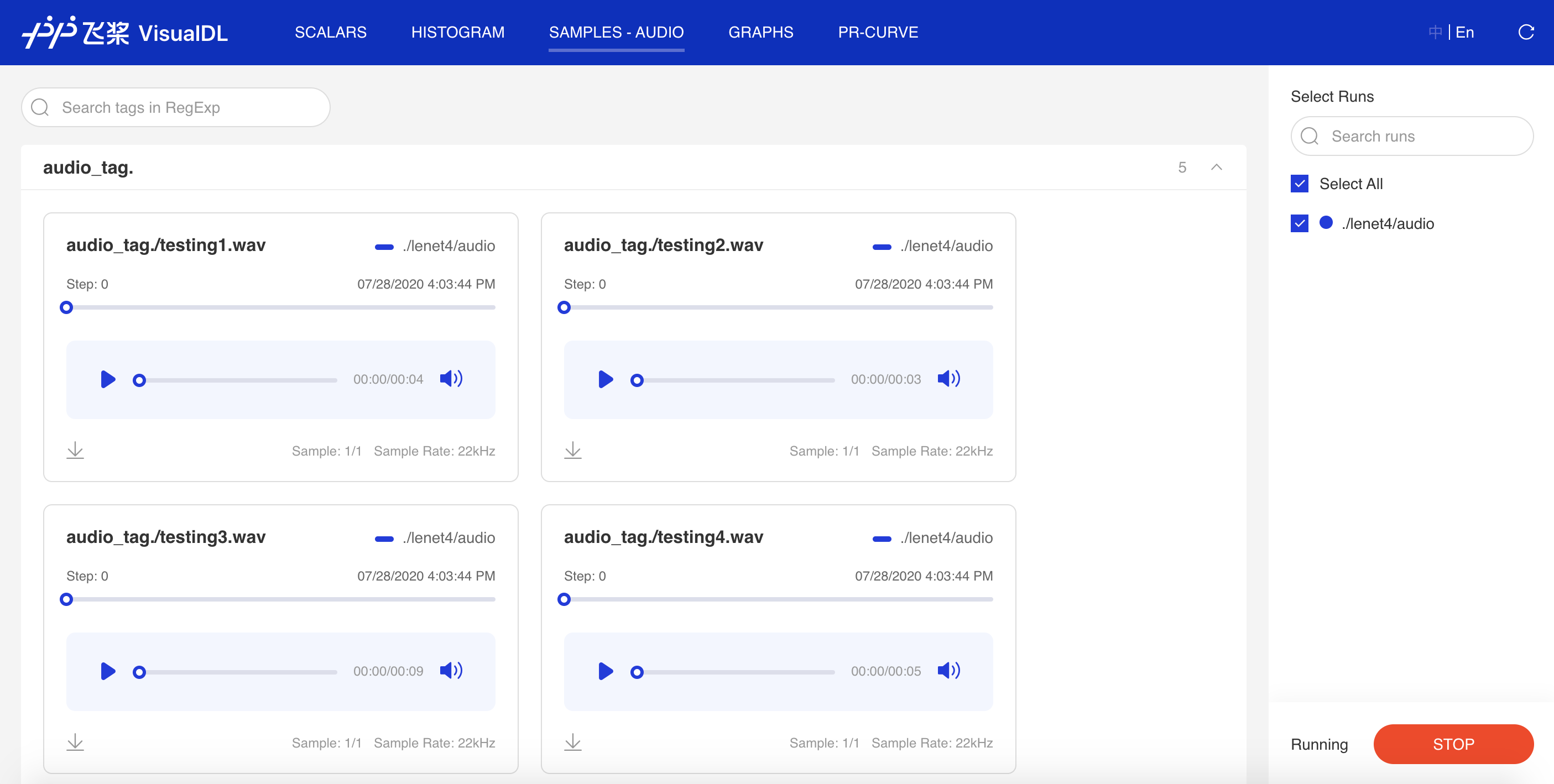 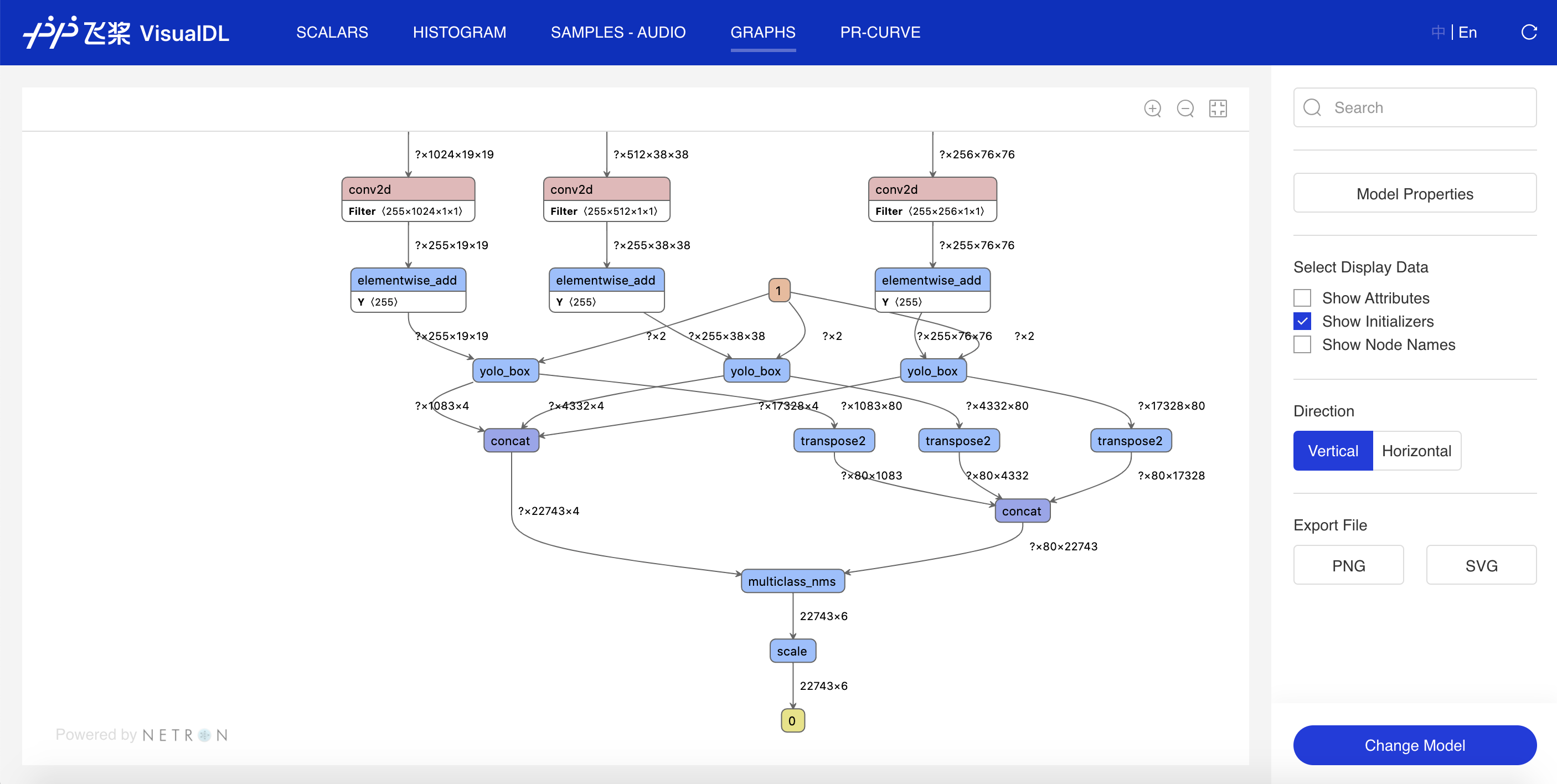 Histogram displays how the trend of tensor (weight, bias, gradient, etc.) changes during the training process in the form of histogram. Developers can adjust the model structures accurately by having an in-depth understanding of the effect of each layer. 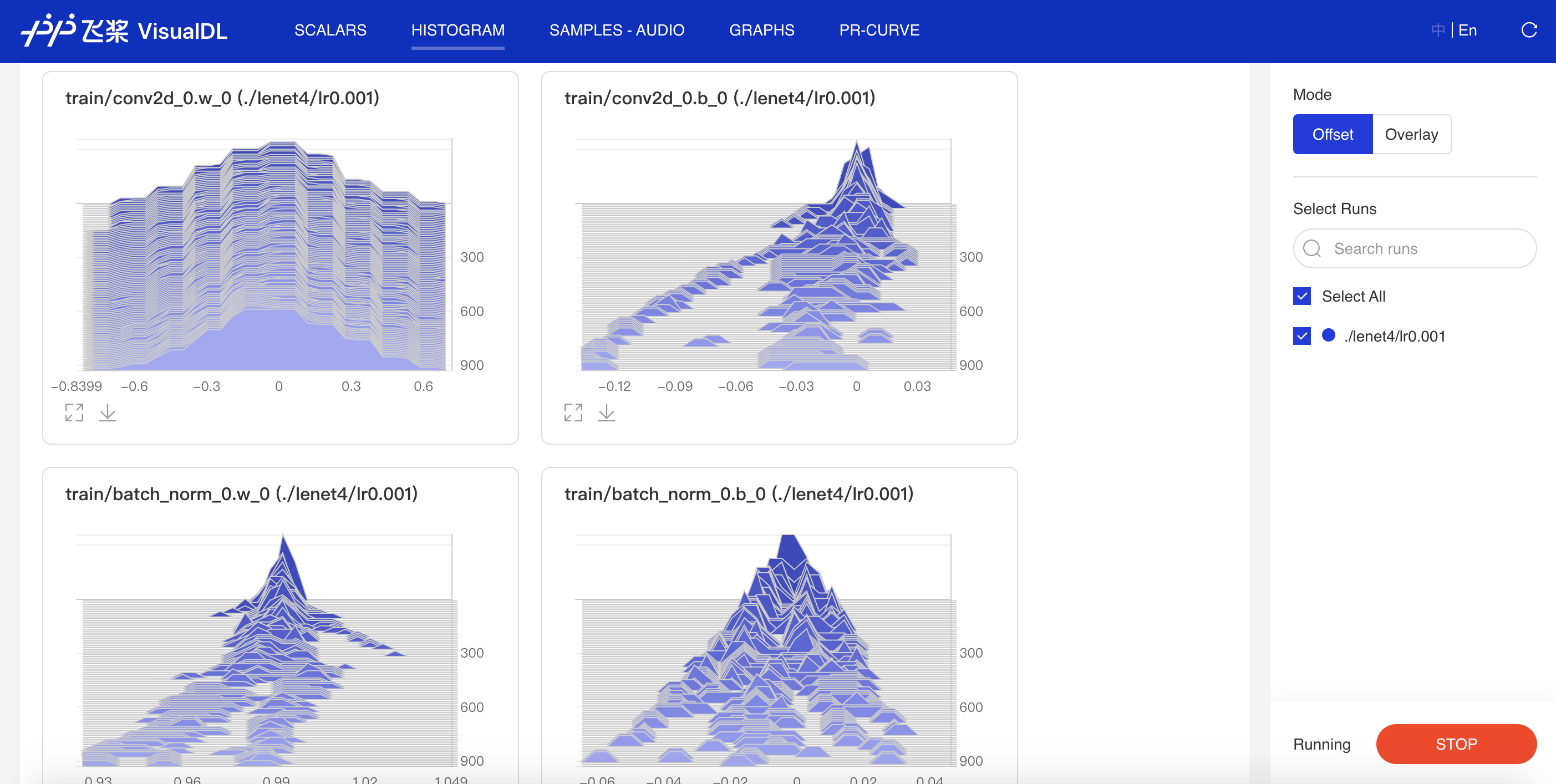 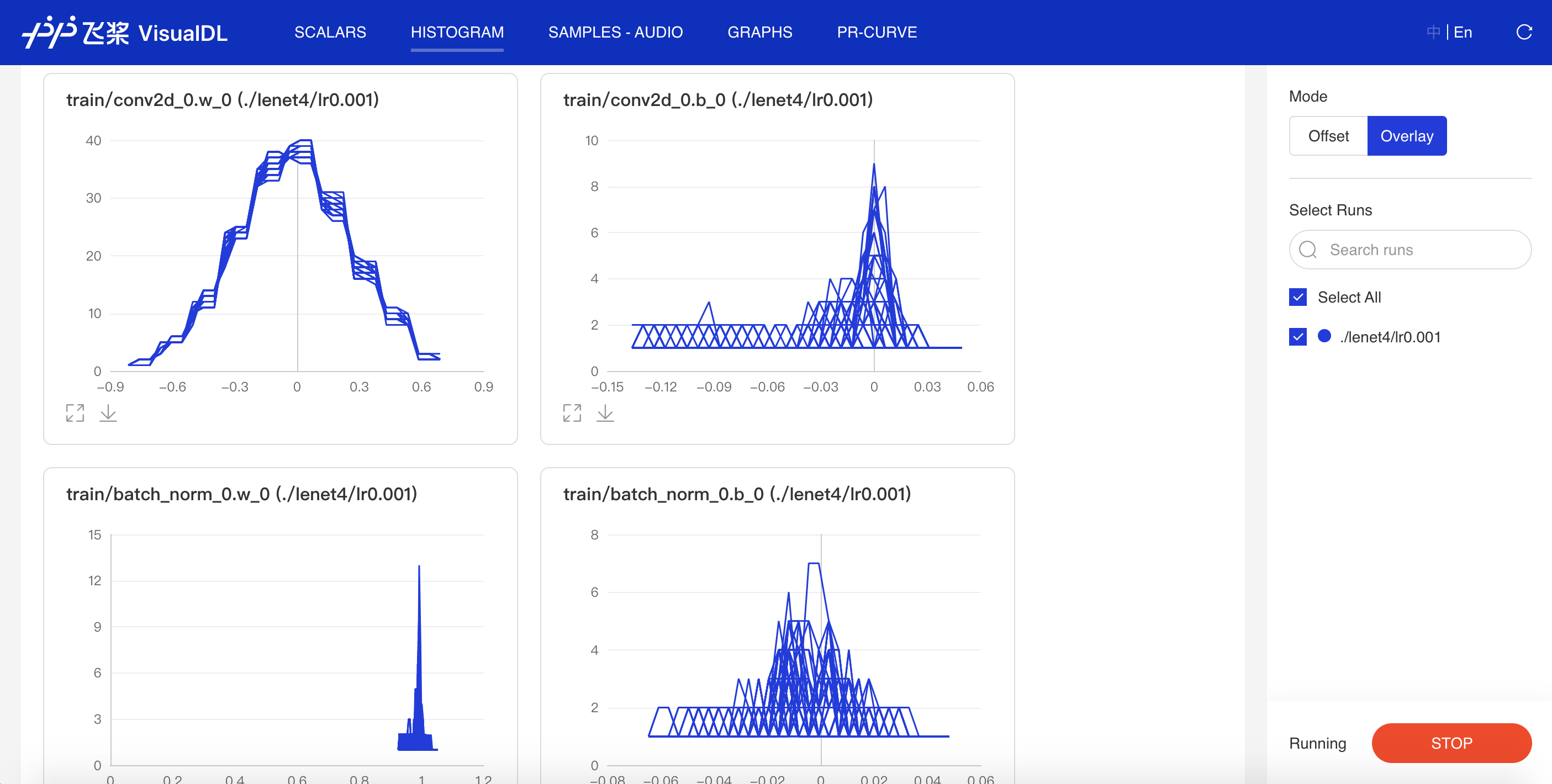 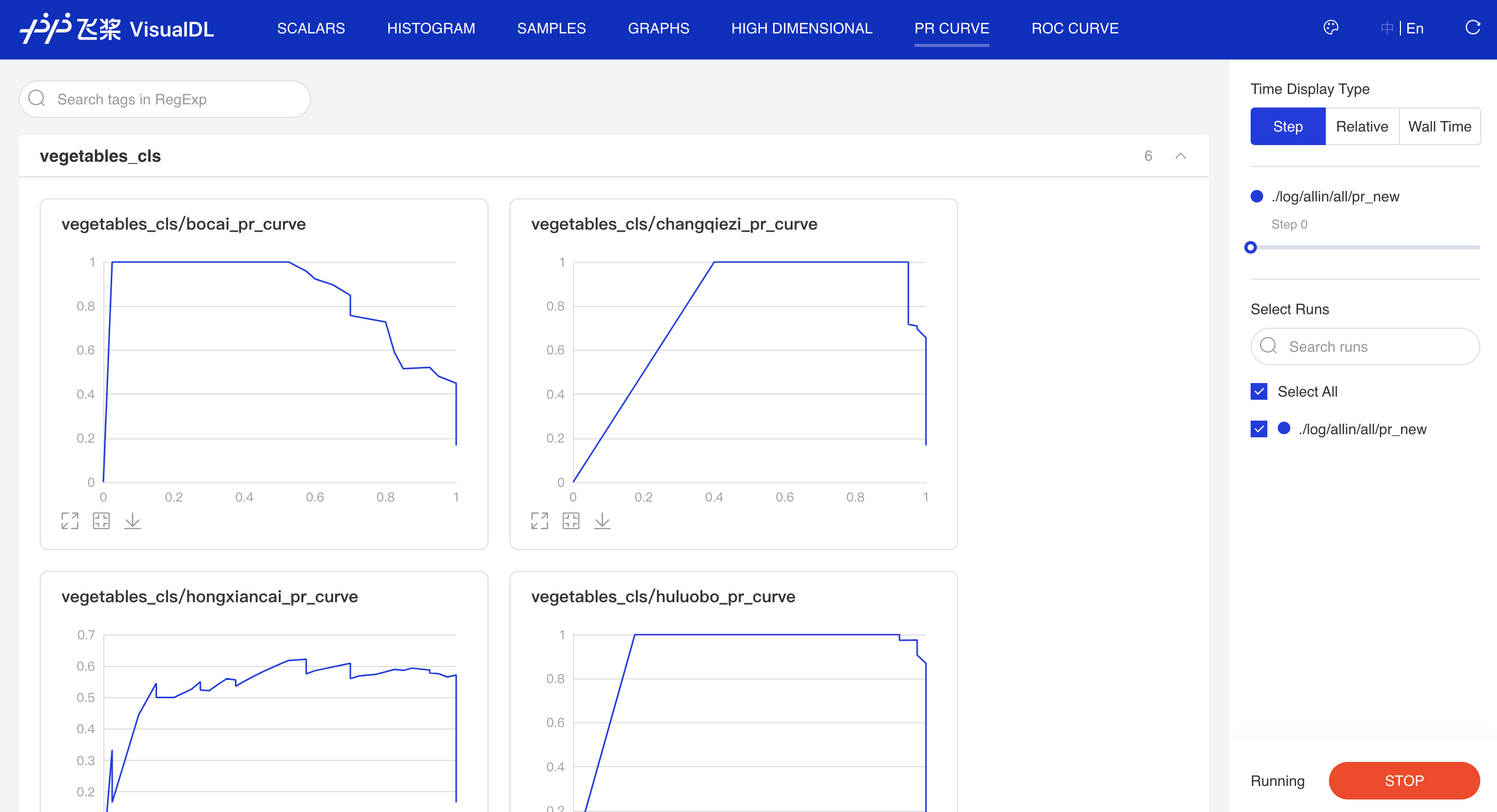 High Dimensional provides three approaches--T-SNE, PCA and UMAP--to do the dimensionality reduction, allowing developers to have an in-depth analysis of the relationship between high-dimensional data and to optimize algorithms based on the analysis.

VDL.service enables developers to easily save, track and share visualization results with anyone for free. 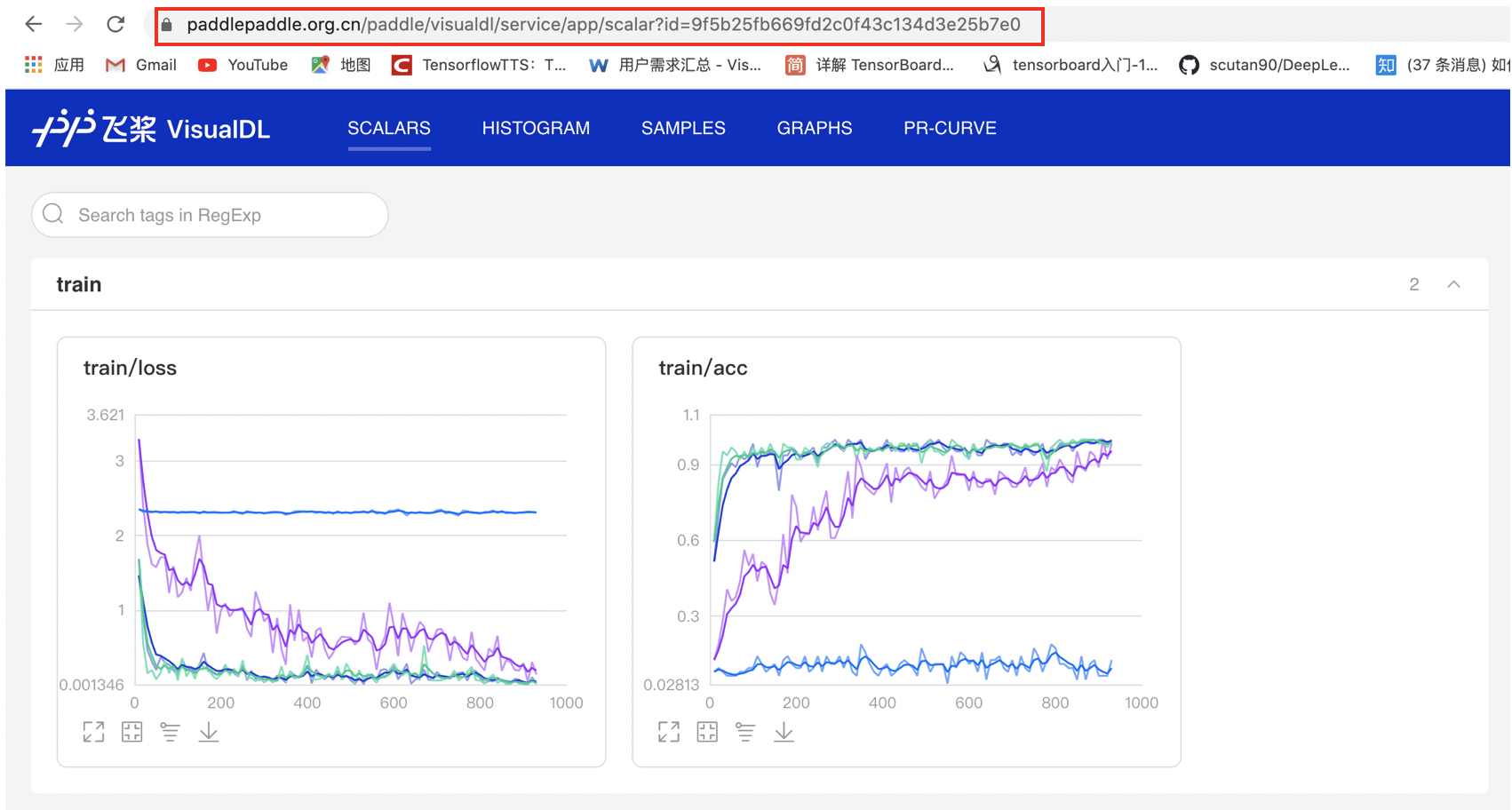 VisualDL, in which Graph is powered by Netron, is an open source project supported by PaddlePaddle and ECharts.

Developers are warmly welcomed to use, comment and contribute.

For more details related to the use of VisualDL, please refer to VisualDL User Guide。

Welcome to join the official QQ group 104578336 to communicate with PaddlePaddle team and other developers.