This is a README intended to provide an overview of the project requirements for the MMORPG game.

Overview of the game

This section describes the main features and functionality of the game.

The chosen them was Sports / racing. The implemented game consists of a demolition-derby style multi-level game, where players can join an arena and compete against each other.

Points can be used in this game in two ways:

As the game is a real-time multiplayer game, the players can directly with each other simply by playing the game. There is no limit to the numbers of concurrent players that can join, but the performance of the server may be affected by too may concurrent connections.

To add another level of social interaction, a chat was implemented were the players can broadcast their messages to every other player in the game.

The game part of the project was implemented using the JavaScript Game framework Phaser.js. The code for driving a car in Phaser.js was taken from an online tutorial, but it was extended to the multi-player case. In addition the collision detection system was created by me along with all the front-end functionality such as points, cars and levels management.

How the collision detection systems works

Example of how the X point of the tip of the car is calculated: 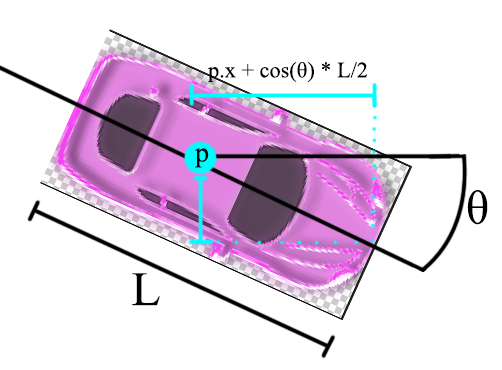 The functionality of the pages like market and levels were implemented using JQuery, as there was only a need of simple AJAX calls to the server.

The server of the game uses the following technologies: