A port of a small but relevant part of Numpy to Transcrypt, simplified for the sake of speed

Numscrypt is a port of a small part of NumPy to Transcrypt using JavaScript typed arrays. As with Transcrypt, the eventual goal is not to completely copy a desktop programming environment. Rather a lean and mean subset is sought that can still be very useful, e.g. for science demo's in the browser or for small to medium scale computations.

Whereas NumPy often has multiple way to do things, Numscrypt focuses on one obvious way. The clearest example is the NumPy type matrix type, that is a specialization of ndarray with confusingly deviating use of some operators. In Transcrypt matrix is deliberately left out, to keep the code lean.

While the first minor versions of Numscrypt fully supported views, strides, offsets and arrays of arbitrary dimension, this proved to be too slow when compiled to JavaScript. Especially the generalized indexing caused a lot of overhead when arrays weren't stored in natural order. Moreover supporting arrays of arbitrary dimension lead to recursion in some places, and with that to suboptimal performance and scalability. And all this overhead was merely there to support use cases that were relatively rare. Of course copying in itself costs time, but JavaScript typed arrays can do it in one highly optimized operation , e.g. in case of slicing, provided natural storage order is followed. And indeed copies cost memory as well. However views are slow due to complicated index computations, and speed was favoured over small memory use here.

The rationale behind favouring speed over small memory use deserves some attention, since it also makes clear what Numscrypt is for. In computations like inversion, non-elementwise matrix multiplication, convolution and FFT, the ability to store very large arrays is pointless if computations are slow. So the choice for speed over small memory use illustrates the fact that Numscrypt is meant for non-trivial computations on small to medium scale, rather than for data reshuffling on medium to large scale.

In contrast to Transcrypt, which already has seen officially releases, Numscrypt is still experimental. This led to the conclusion that if the course had to be altered significantly, it had to happen soon, well before the first release. So in pursuit a good balance between familiarity and efficiency, requirements with respect to Numpy compatibility have been relaxed. Arrays can now only have one or two dimensions and are always stored in natural storage order per row. This means that views are not supported anymore and slices are always copies, since that enables them to have natural storage order as well, enabling fast access.

Computing in a browser?

The course of Numscrypt has been fundamentally altered. Starting out as a toy, it now has serious, but modest, ambitions. If people venture to compute in JavaScript, why not allow them to do it in Python, a language is established in the scientific community, traditionally featuring things like operator overloading and complex numbers. While predicting is hard, especially if it concerns the future, there's a wave of new technologies coming up allowing faster computation in JavaScript. Numscrypt is now simple and open enough to surf on that wave, while hiding the technical details behind a very readable notation. 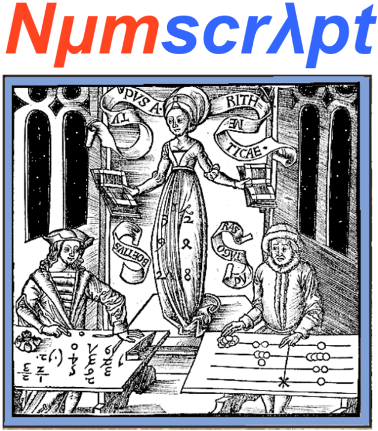 The first computers were used... to compute

A port of a small but relevant part of Numpy to Transcrypt, simplified for the sake of speed