The zypper-docker command line tool provides a quick way to patch and update Docker Images based on either SUSE Linux Enterprise or openSUSE.

zypper-docker mimics zypper command line syntax to ease its usage. This application relies on zypper to perform the actual operations against Docker images. 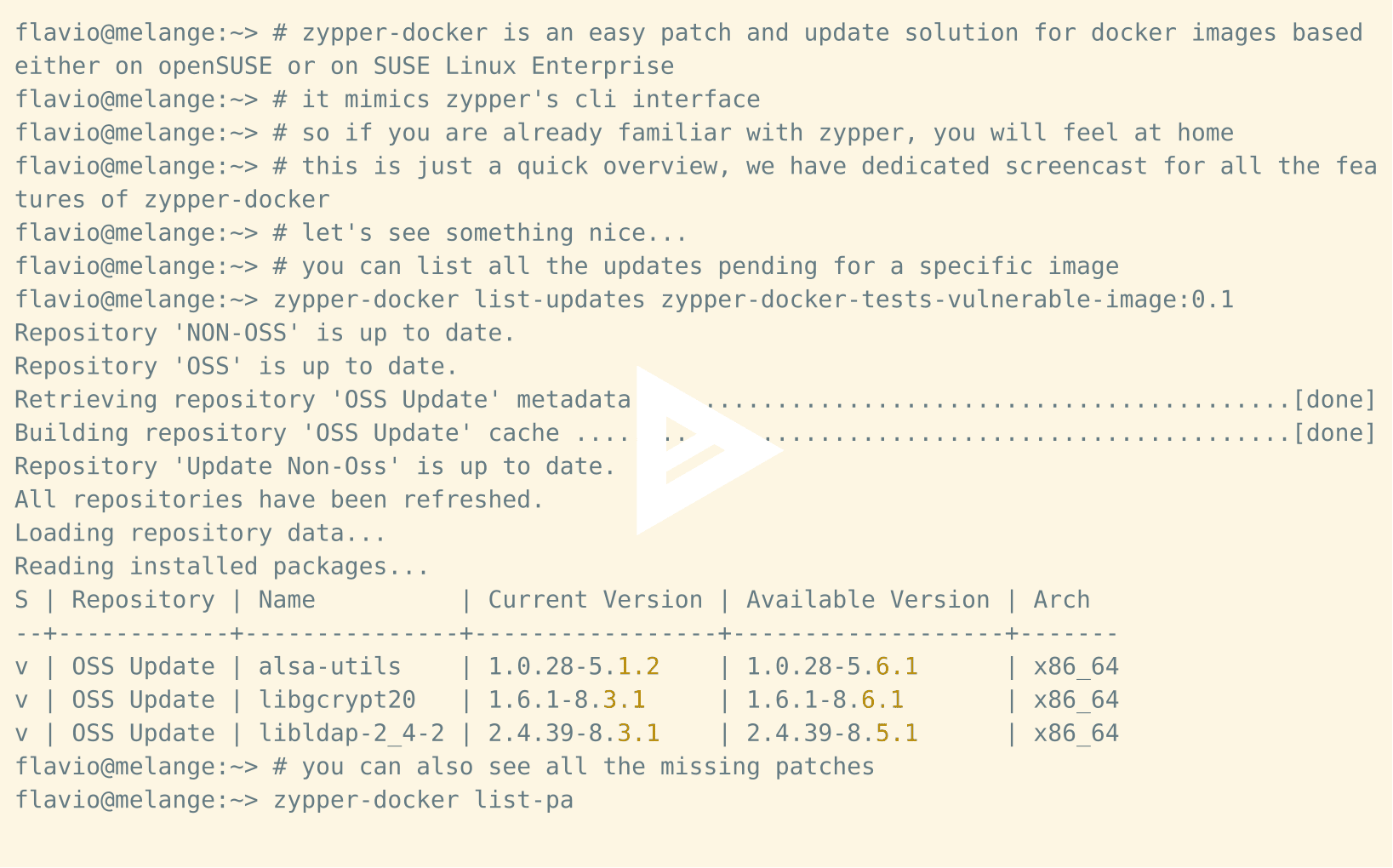 zypper-docker can interact with docker daemons running on remote machines. To do that it uses the same environment variables of the docker client.

docker-machine can be used to configure the remote Docker host and setup the local environment variables. 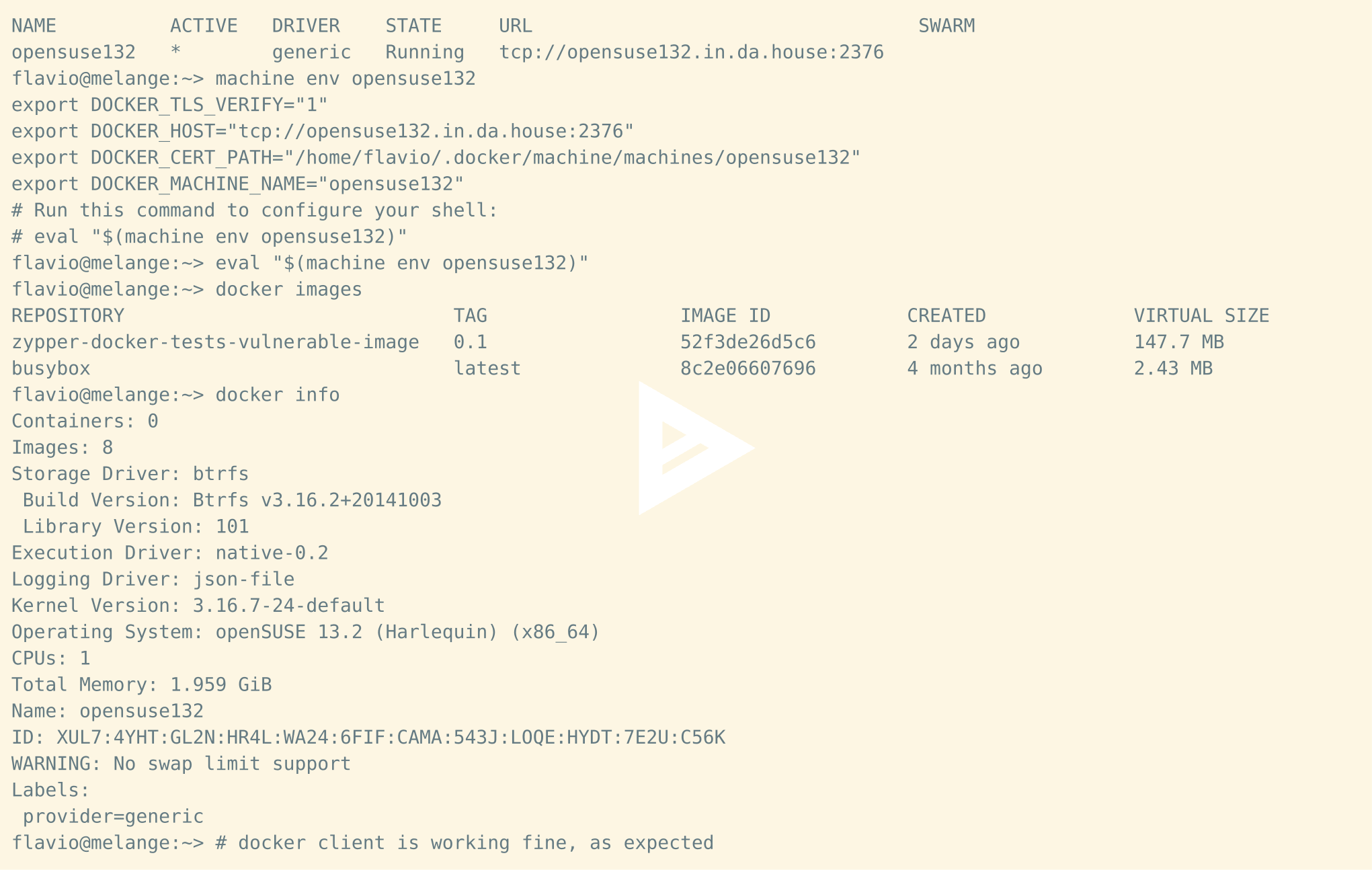 The images command is similar to the one from Docker, but this one only lists images that are based on either openSUSE or SUSE Linux Enterprise. Here's an example:

First of all, you can check whether an image has pending updates or not by using the list-updates command. The usage is as follows: 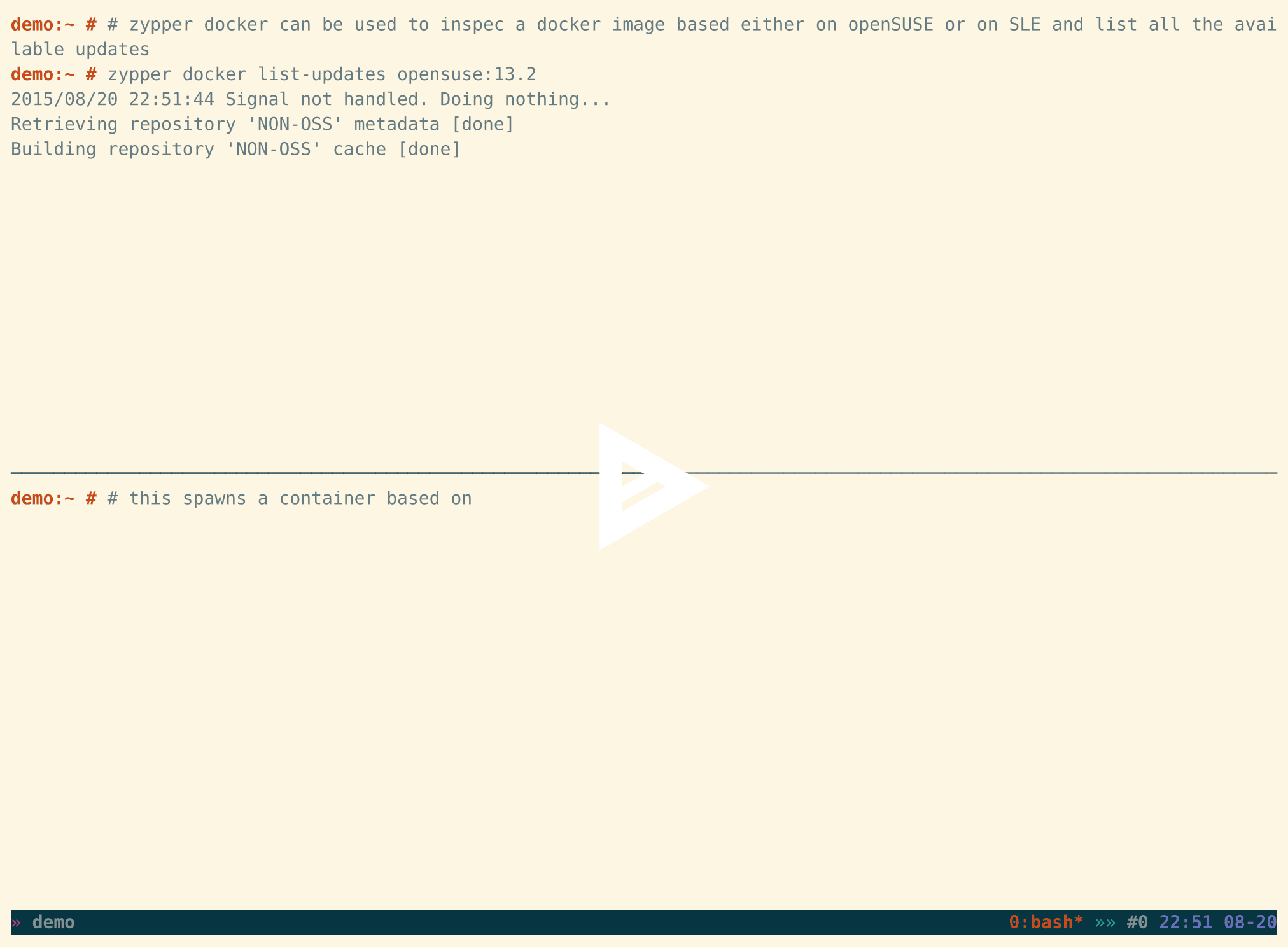 But more important than listing updates is to actually install them. You can do this with the update command. It has the following usage:

The available options are:

You can find a small video about the update Command here: 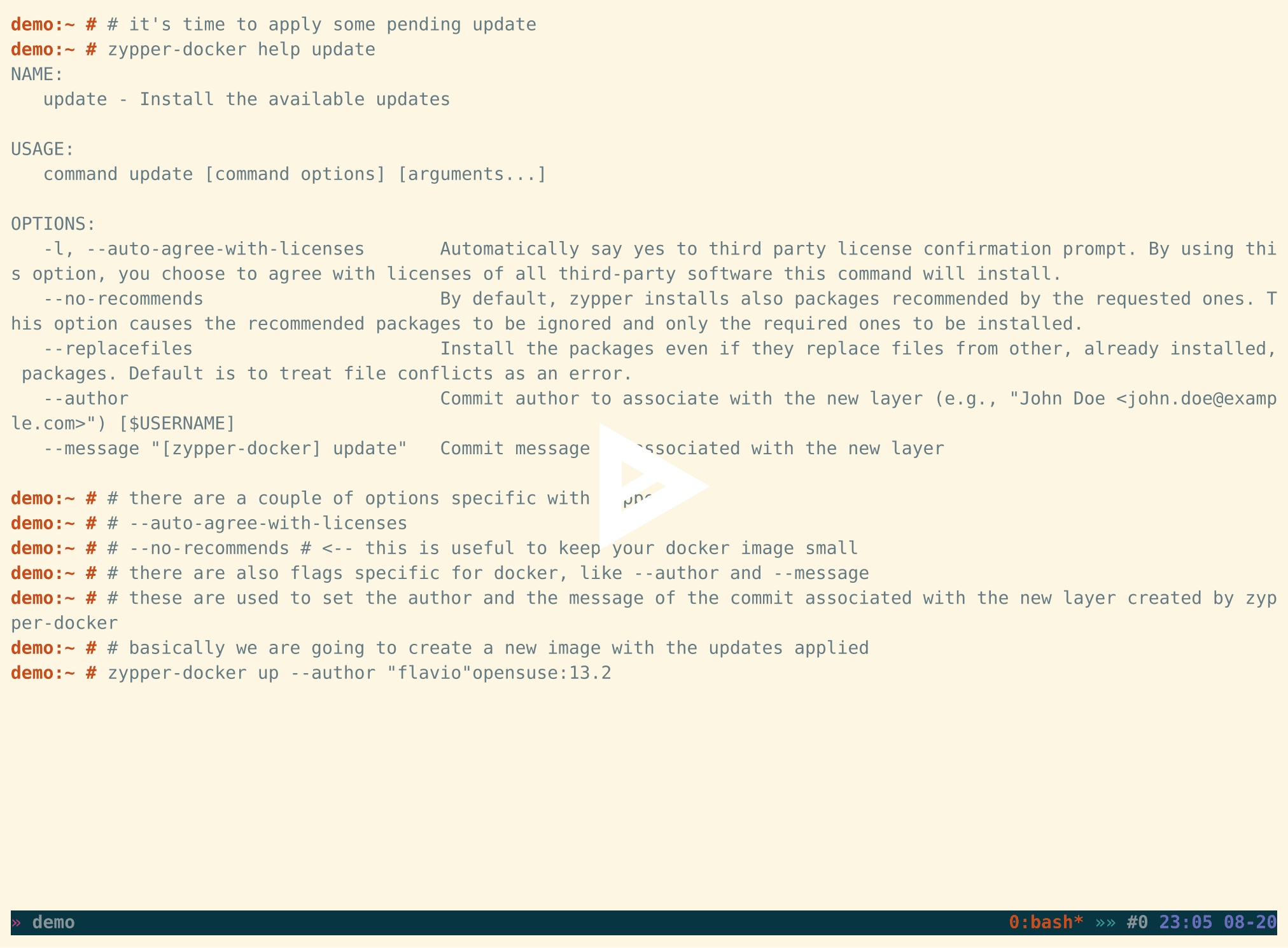 As you will notice, both of these commands accept some options. For these commands the user can filter the results according to the following attributes:

The available options are:

You can find a small video on listing patches here: 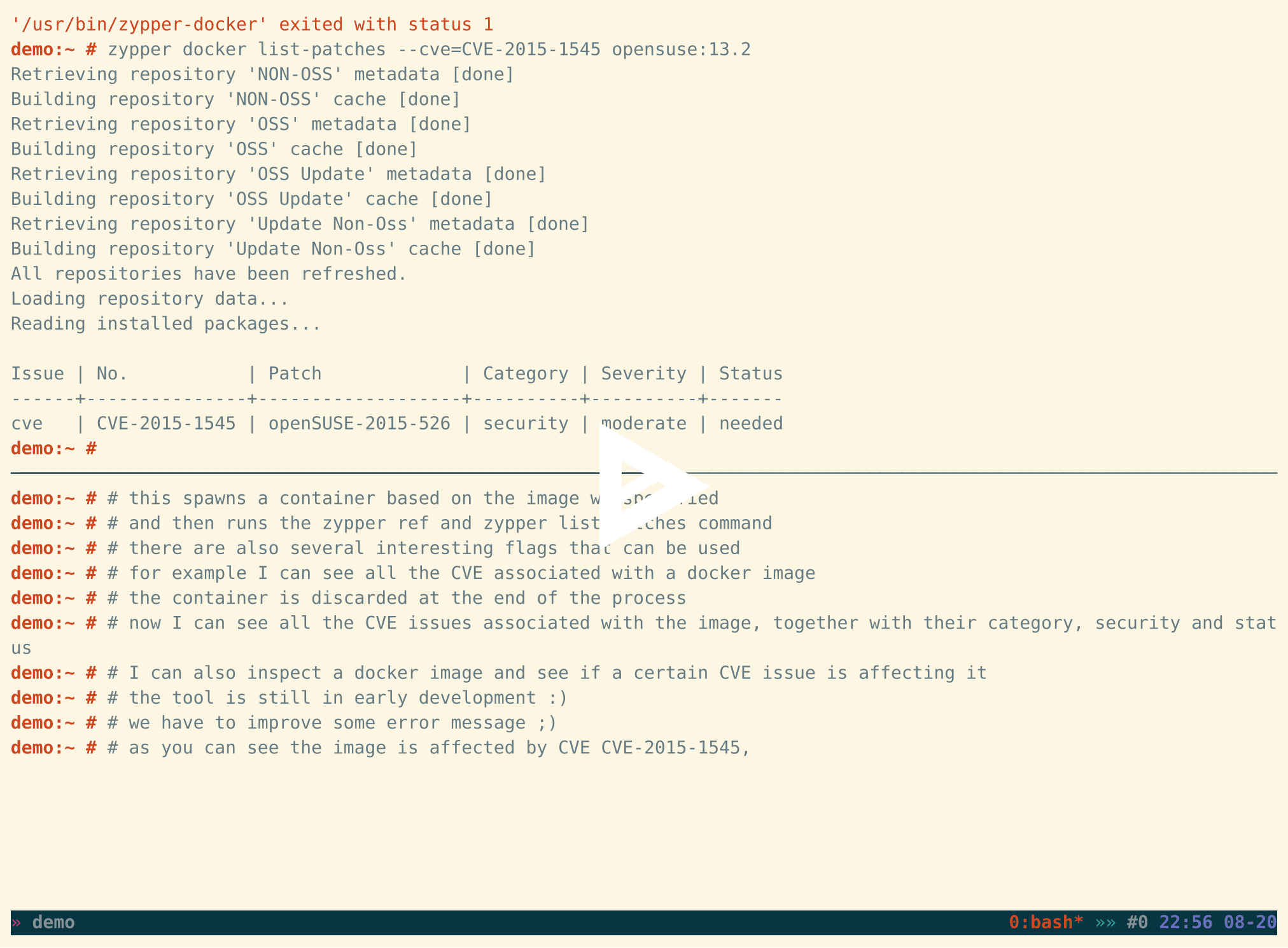 Interestingly enough, zypper can also just check whether there are patches available at all. This is really convenient for using zypper inside of scripts. zypper-docker also implements this in the form of the patch-check command. This is its usage:

Besides listing and checking for patches, you can also of course install them. You do that with the patch command. It has the following usage:

Similarly to the update command, this command will not change the original change, but it creates a new patched image. This command also takes into account that the new image does not overwrite an already existing one. The arguments that can be passed to this command are as follows:

You can find a small video showing off the patch command here: 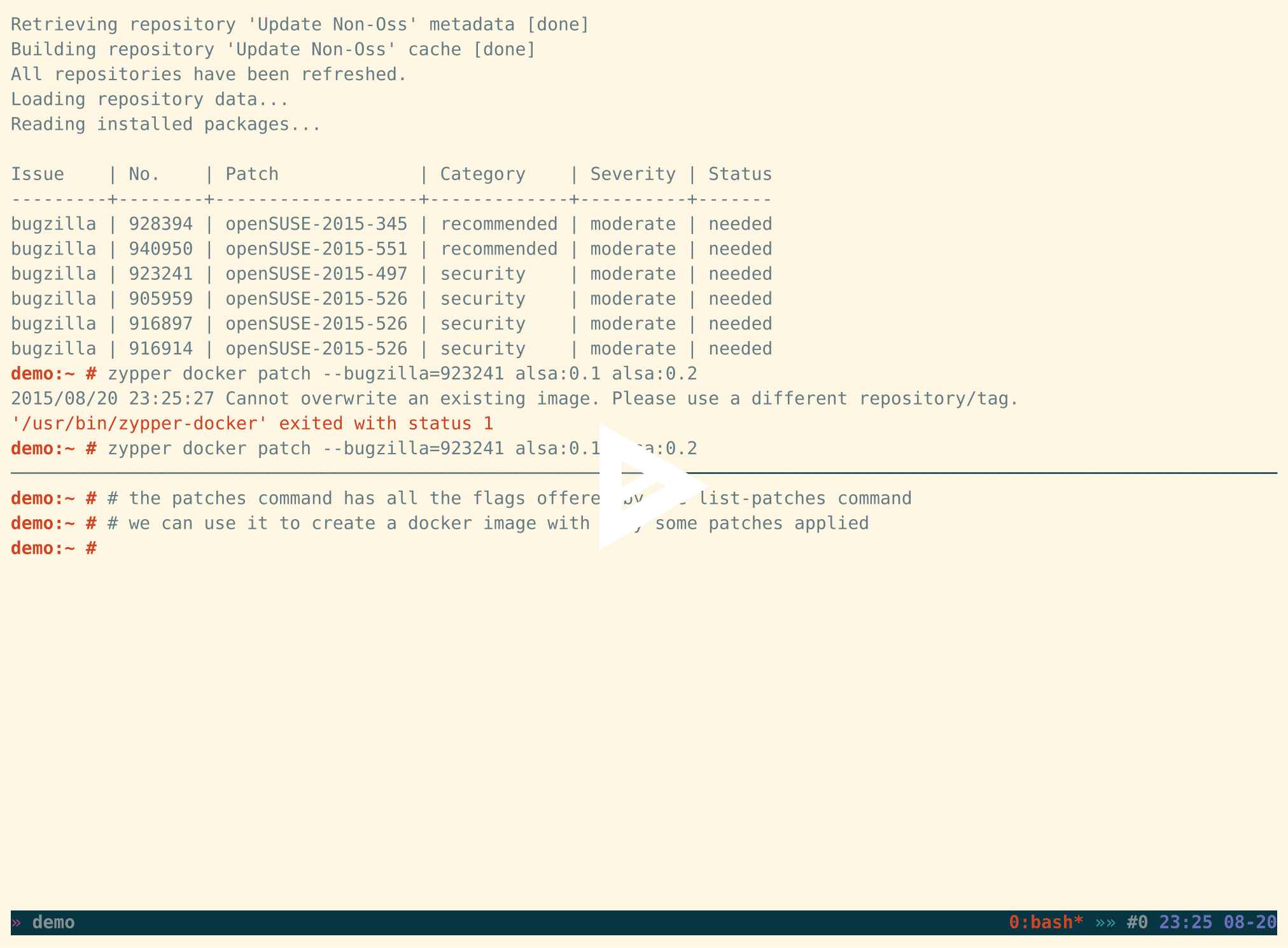 Lastly, zypper-docker also has the ps command. This command traverses through all the running containers and investigates which of them are based on images that have been recently upgraded. Therefore, this command does not provide feedback about all the possible SUSE containers, only the ones that have been updated/patched with the update and patch commands.

This command doesn't have any options, so the usage is quite straight-forward:

Note that some of these commands might be expensive. That's why some of the needed data is cached into a single file. This file is named docker-zypper.json. This cache file normally resides inside of the $HOME/.cache directory. However, if there is some problem with this directory, it might get saved inside of the /tmp directory.

It is possible to run all the test suite and the code analysis tool using docker.

The tests and code analysis tool are going to be executed ran using both the latest stable version of Go and the current experimental version.

To build these docker images type:

To run the test suite and the code analysis tools against all Go versions, type:

This will build a Docker image containing all the software (RSpec, plus other Ruby gems) required to run the tests. The image will be started, the socket used by the Docker daemon on the host will be mounted inside of the new container. That makes possible to invoke the docker client from within the container itself.

Licensed under the Apache License, Version 2.0. See LICENSE for the full license text.