Wio Link is designed to simplify your IoT development. It is an ESP8266 based Wi-Fi development board for you to create IoT applications with open-source, plug and play electronics, mobile APPs and RESTful APIs. 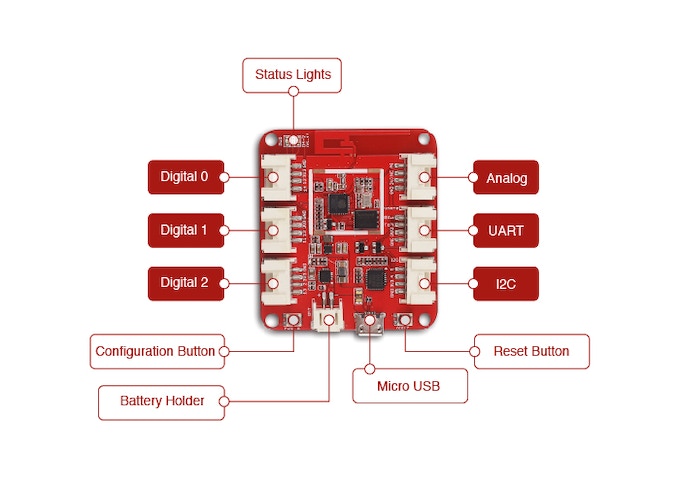 The BLUE led is the network status indicating led. It has the following blink patterns:

3. Process of Connecting to Server

Assuming that user has finished the configure operation and Wio Link can join WiFi router now, the following are steps Wio Link will take to connect to the server:

The GPIO2 is the TX of UART1 (UART1 only has TX). UART1 is used as the default console of ESP8266 SDK. So the bootloader's debugging messages will be printed at UART1 when booting up.

When the bootloader finished the booting and the firmware took the control, GPIO2 is used to drive the blue led by default (too less GPIOs ESP8266 gives us). But don't worry we still have ways to enable the debugging console, to see the debugging messages printed by the Wio firmware. Those messages are produced during the development of the firmware, but also can be helpful if you're facing some difficulty in configuring or developing.

To enable the debugging console, please follow the steps below:

Find a usb to serial convertor, connect GPIO2 (indicated by screen silk "2") to the RX pin of the convertor, and also the Ground line.

Step 2 - Enable the firmware to print debugging messages through UART1.

Firstly, please follow the guide in the README page to install wio-cli if you haven't. Then press the CONFIG button over 5 seconds and release it, this will put the Wio device into configuration mode. Now configure your computer's Wi-Fi to connect the SSID exposed from the Wio device, whose name will be like Wio_XXXXXX where XXXXXX is the HEX string of the last three bytes of the MAC address of the Wio device. With this done, open your favorite terminal application, and execute:

You will get the response like this which indicates the success of your operation.

Use the raw command via built-in serial port

There's a built-in usb to serial convertor onboard which connects to the UART0 of ESP8266. When the Wio device's put into configuration mode, UART0 acts as a raw command interface. Here we're introducing a few useful commands you may utilize. To use these commands, plug your Wio device to your computer, and connect the serial port with your favorite serial port terminal application and baud rate 115200. Press the CONFIG button over 5 seconds and release it, this will put the Wio device into configuration mode. Now send out one of the following commands:

Back to the point, to enable the debugging printing, we should send out

If the setting takes effect, the serial will response

Finally, one thing should be clarified again that once you enabled the debugging printing, the blue LED will blink randomly (apparently, actually it blinks when UART1 transmits data). Disabling of debugging printing will give back the normal blue LED. 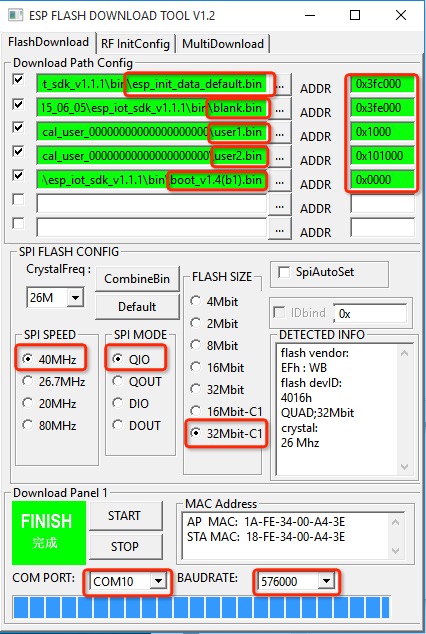 For Linux and Mac users (plus Windows users who have Python installed), please follow these steps.

6.1 Use Wio Link as Arduino 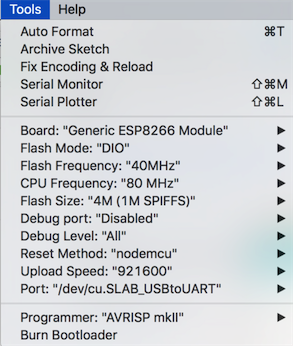 One thing must be noticed that the power supply of Grove sockets is controlled by a MOSFET switch which is gated by GPIO 15. So you must pull up GPIO 15 in your Arduino sketch to power on the Grove system:

6.2 Use Wio Link's SDK and Program in Arduino-Style

The whole project's source code provides a good framework to native program instead of programing directly based on ESP8266's SDK. The benefits are:

Now let's start a real practice. In this practice, we will program the Wio Link to read temperature and display the read temperature on an OLED screen, also expose Web of Things APIs for the Grove - Temperature & Humidity sensor to internet.

If you have git installed, clone the project with the following commands

If you have no git installed, please do the following.

Use the script to scan all the Grove drivers into a database which will be perceived by the Wio firmware framework.

The option -k tells scan_drivers.py to skip compiling all the grove drivers into one static library.

Now a file named "drivers.json" will appear in the root directory ../../.

In the working directory, there should be at least one file named Main.cpp. Main.cpp is like the Arduino sketch file. It always consists of two basic functions - setup() and loop(). You can edit Main.cpp to implement these two functions. Also you can create new header files and source files in this directory. The newly created files which suffixed with .h or .cpp extension will automatically be scanned by Makefile. You can use the APIs from ESP's official SDK, also you can use the grove drivers delivered along with the project.

In this practice we will use the delivered grove drivers in two ways.

No.1 is to edit connection_config.json.

This is also how the drag-n-drop configuration works. After being added into connection_config.json, the grove will be virtualized into web of things with many APIs exposed. The Wio Link firmware framework will accept network RPC and call specified functions in grove driver, then print the result of called function to network caller in json format.

No.2 is to use the grove drive as native code.

The connection_config.json file describes the connection schematic of Wio Link/Node. It consists of two field - board_name and connections.

"board_name" is string value which can be one of "Wio Link v1.0" or "Wio Node v1.0" currently. For this practice we use Wio Link.

As we already configured Grove - Temperature & Humidity in connection_config.json file, the driver for Grove - Temperature & Humidity will then be included during the compiling process. The Wio firmware framework will take charge of the instantiation for the Class of this driver. We can reference to the instance with a variable. To get the name of this variable, we need to to pre-build the project, in which process the script will read in connection_config.json and translate it into C++ source code.

The variable for the instance of Grove - Temperature & Humidity's driver Class is GroveTempHumD1_ins, it's a pointer type. Back to the content of ../../grove_drivers/grove_temp_hum/grove_temp_hum.h, the public functions can be called now.

First, we need to install the toolchain for ESP8266. Please refer to this chapter: https://github.com/Seeed-Studio/Wio_Link/wiki/Server-Deployment-Guide#21-esp8266-cross-compile-toolchain

By default, build_firmware.py will compile both user1.bin and user2.bin. In some developing cases, you just want to compile user1.bin or user2.bin, you can do this by:

In detail the script build_firmware.py accepts several parameters in the order showed below:

Default values for those parameters:

Based on the above section "5. Repair Bricked Wio Link", choose the path of user1.bin and user2.bin as the ones in your working directory and only check item user1.bin and item user2.bin.

Another method to flash the firmware for Linux/Mac users is to use the esptool-ck: https://github.com/igrr/esptool-ck

With esptool-ck, the reset of Wio Link board will be handled in background.