A plugin for handlebars in require.js (both in dev and build)

Should work in both the java and node build environments.

Clone this repo* or use bower to add require-handlebars-plugin to your project (typically in you lib/ directory) and make sure you tell requirejs about the new hbs plugin by editing your requirejs.conf.js file (you can also pass a few options):

partialsUrl: base url for loading partials so that you don't have to provide the full path every time you need to load a partial within a template.

And then the output into your body would be as follows:

As of the latest version. This functionality has been removed. Probably use format-js for this.

Just put your helpers in templates/helpers/* and they'll automagically get pulled in as long as you write them as modules.

I find that many helpers are good helpers in regular code as well, so the following is a good practice:

Then in your templates, you can just do:

The system will make sure these modules are pulled in automatically from that directory. But if in your app, you need a rounding module (perhaps in a view/datanormalization place), you could do this:

It's just a module that happens to register itself.

You can specify a helper path callback in the config. The callback should be a function that gets a name of a helper as the only argument and returns the full path to be require()-d, e.g., the following callback allows for automatic loading of helper modules written in CoffeeScript (via the require-cs plugin) under a non-standard location:

Any template that begins with a comment, with only a valid json object in it will be read in as meta data for the template.

I encourage you to list the name of the template and give a description, though these aren't strictly necessary.

If you want to build stylesheets that are comprised of only styles needed by the templates that your app uses, I encourage you to add a styles property to the meta info:

This will inject a link tag in dev mode to load in this style dynamically. At build time, a screen.build.css is created. At this time it is just a list of import statements. These can be inlined by many existing tools. Eventually I'd love it to just happen.

De-duping happens automatically, so don't worry if multiple templates require the same styles. The styles are injected in the order that they are read in, so usually from least specific to most specific. This is usually what you want, but know that if you do weird things, it could break.

In dev mode a few properties are added to your function (an object in javascript) as a helper with debugging and as a testing plug-point.

Note: All of these go away after a build, as they just take up space with data that is known at build time, which is the ideal time to get stuff figured out (speed-wise).

As long as all of your paths match up, this should precompile all of your templates and include them in the build.

You can stub out the hbs plugin in the build using stubModules the same way you would for other plugins that inline the final function. Your helpers and compiled templates still need to load Handlebars though, so you'll need to make sure they load the runtime version of Handlebars included in this repo as hbs/handlebars.runtime.js. You just need to do 2 things for that in your build config: 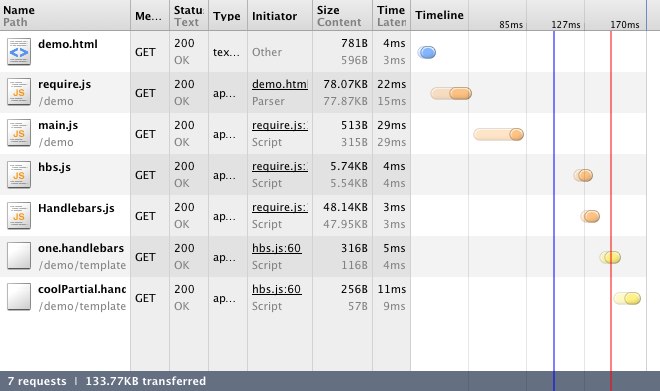 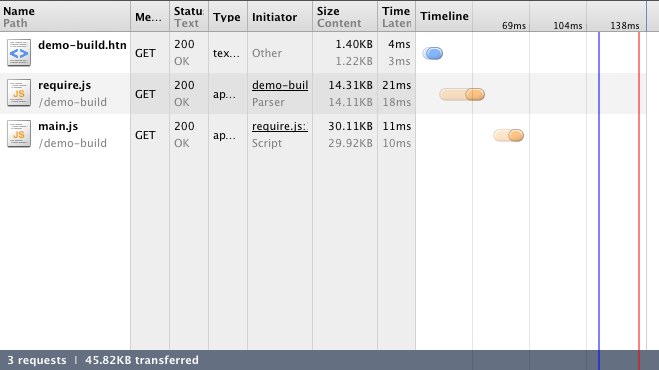 So many dependencies in the hbs plugin!

I use them for coding happiness. It shouldn't bother you tooooo much, because it all gets built out in production. The hbs.js file essentially gets written to the main.js file as a noop (a few empty definitions), and none of it's dependencies are included into the build. All the dependencies are inside the hbs folder and this folder should be a sibling of the hbs.js file.

To run the demo, go into the root directory of this project and run the following command.

This requires that node.js is installed. To see these in your browser, I'd suggest serving them quickly with the python simple server. (Linux/OSX assumed here, but there is a java implementation of the require.js build that should work just as well as the node version. I have not tried it though.)

You could also use the node 'serve' module.

You should be able to see all of the templates and individual files in your network panel in dev mode, and just 2 minified files in build mode.

There are several configurable options, which you can set in your require.config:

This plugin registers every single template as a partial with it's modified module name and no file extension.

I'd encourage you to not call registerPartials in your code, and just use the automatic module registering, that way you definitely won't hit any collisions. You could also just be careful. We're all adults here.

In dev mode, loading the templates requires that you are on the same domain as your templates. This is standard same origin policy stuff. Once you build, though, it won't matter since there are no additional requests. Usually a few cleverly placed host overrides get you through the dev mode hurdles.

Very little of this is specific to handlebars, but things are just a tiny bit too specific about how everything works to properly generalize this.

If you'd like to implement this for your templating language of choice, you'll need:

I'd just turn your template language into a module first (just the old global name, or whatever), then look through the references to Handlebars in hbs.js and see if your templating language does something similar. It's not a terribly complicated process.

Most of the code in this is from James Burke and Yehuda Katz in require.js and handlebars.js (respectively). Those projects are under their own license. Any other code added by me is released under the WTFPL license.

A plugin for handlebars in require.js (both in dev and build)