You shouldn't play video games all day, so shouldn't your AI! We built a virtual environment simulator, Gibson, that offers real-world experience for learning perception.

Summary: Perception and being active (i.e. having a certain level of motion freedom) are closely tied. Learning active perception and sensorimotor control in the physical world is cumbersome as existing algorithms are too slow to efficiently learn in real-time and robots are fragile and costly. This has given a fruitful rise to learning in the simulation which consequently casts a question on transferring to real-world. We developed Gibson environment with the following primary characteristics:

I. being from the real-world and reflecting its semantic complexity through virtualizing real spaces,
II. having a baked-in mechanism for transferring to real-world (Goggles function), and
III. embodiment of the agent and making it subject to constraints of space and physics via integrating a physics engine (Bulletphysics).

Naming: Gibson environment is named after James J. Gibson, the author of "Ecological Approach to Visual Perception", 1979. “We must perceive in order to move, but we must also move in order to perceive” – JJ Gibson

Please see the website (http://gibsonenv.stanford.edu/) for more technical details. This repository is intended for distribution of the environment and installation/running instructions. This is the 0.3.1 release. Bug reports, suggestions for improvement, as well as community developments are encouraged and appreciated. change log file.

The full database includes 572 spaces and 1440 floors and can be downloaded here. A diverse set of visualizations of all spaces in Gibson can be seen here. To make the core assets download package lighter for the users, we include a small subset (39) of the spaces. Users can download the rest of the spaces and add them to the assets folder. We also integrated Stanford 2D3DS and Matterport 3D as separate datasets if one wishes to use Gibson's simulator with those datasets (access here).

There are two ways to install gibson, A. using our docker image (recommended) and B. building from source.

The minimum system requirements are the following:

For docker installation (A):

For building from the source(B):

We use docker to distribute our software, you need to install docker and nvidia-docker2.0 first.

You can either 1. pull from our docker image (recommended) or 2. build your own docker image.

If the installation is successful, you should be able to run docker run --runtime=nvidia -ti --rm -e DISPLAY -v /tmp/.X11-unix:/tmp/.X11-unix -v <host path to dataset folder>:/root/mount/gibson/gibson/assets/dataset gibson to create a container. Note that we don't include dataset files in docker image to keep our image slim, so you will need to mount it to the container when you start a container.

Notes on deployment on a headless server

If you don't have X server running, you can still run gibson, see this guide for more details.

B. Building from source

If you don't want to use our docker image, you can also install gibson locally. This will require some dependencies to be installed.

First, make sure you have Nvidia driver and CUDA installed. If you install from source, CUDA 9 is not necessary, as that is for nvidia-docker 2.0. Then, let's install some dependencies:

Install OpenAI baselines if you need to run the training demo.

First run xhost +local:root on your host machine to enable display. You may need to run export DISPLAY=:0 first. After getting into the docker container with docker run --runtime=nvidia -ti --rm -e DISPLAY -v /tmp/.X11-unix:/tmp/.X11-unix -v <host path to dataset folder>:/root/mount/gibson/gibson/assets/dataset gibson, you will get an interactive shell. Now you can run a few demos.

If you installed from source, you can run those directly using the following commands without using docker. You will be able to use ASWD keys on your keyboard to control a car to navigate around Gates building. A camera output will not be shown in this particular demo. You will able to use ASWD keys on your keyboard to control a car to navigate around Gates building. You will also be able to see the RGB and depth camera outputs.

By running this command you will start training a husky robot to navigate in Gates building and go down the corridor with RGBD input. You will see some RL related statistics in the terminal after each episode. By running this command you will start training an ant to navigate in Gates building and go down the corridor with RGBD input. You will see some RL related statistics in the terminal after each episode.

Below is Gibson Environment's framerate benchmarked on different platforms. Please refer to fps branch for the code to reproduce the results. Gibson can provide pixel-wise frame-by-frame semantic masks when the model is semantically annotated. As of now we have incorporated models from Stanford 2D-3D-Semantics Dataset and Matterport 3D for this purpose. You can access them within Gibson here. We refer you to the original dataset's reference for the list of their semantic classes and annotations.

For detailed instructions of rendering semantics in Gibson, see semantic instructions. As one example in the starter dataset that comes with installation, space7 includes Stanford 2D-3D-Semantics style annotation.

Gibson provides a base set of agents. See videos of these agents and their corresponding perceptual observation here.

To enable (optionally) abstracting away low-level control and robot dynamics for high-level tasks, we also provide a set of practical and ideal controllers for each agent.

More demonstration examples can be found in examples/demo folder

More training code can be found in examples/train folder.

We provide examples of configuring Gibson with ROS here. We use turtlebot as an example, after a policy is trained in Gibson, it requires minimal changes to deploy onto a turtlebot. See README for more details.

You can code your RL agent following our convention. The interface with our environment is very simple (see some examples in the end of this section).

First, you can create an environment by creating an instance of classes in gibson/core/envs folder.

Then do one step of the simulation with env.step. And reset with env.reset()

obs gives the observation of the robot. It is a dictionary with each component as a key value pair. Its keys are specified by user inside config file. E.g. obs['nonviz_sensor'] is proprioceptive sensor data, obs['rgb_filled'] is rgb camera data.

rew is the defined reward. env_done marks the end of one episode, for example, when the robot dies. info gives some additional information of this step; sometimes we use this to pass additional non-visual sensor values.

We mostly followed OpenAI gym convention when designing the interface of RL algorithms and the environment. In order to help users start with the environment quicker, we provide some examples at examples/train. The RL algorithms that we use are from openAI baselines with some adaptation to work with hybrid visual and non-visual sensory data. In particular, we used PPO and a speed optimized version of PPO.

Each environment is configured with a yaml file. Examples of yaml files can be found in examples/configs folder. Parameters for the file is explained below. For more informat specific to Bullet Physics engine, you can see the documentation here.

Gibson provides a set of methods for you to define your own environments. You can follow the existing environments inside gibson/core/envs.

Goggles: transferring the agent to real-world

Gibson includes a baked-in domain adaptation mechanism, named Goggles, for when an agent trained in Gibson is going to be deployed in real-world (i.e. operate based on images coming from an onboard camera). The mechanisms is essentially a learned inverse function that alters the frames coming from a real camera to what they would look like if they were rendered via Gibson, and hence, disolve the domain gap. 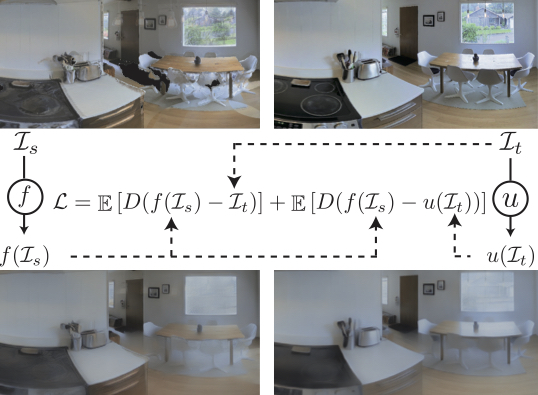 More details: With all the imperfections in point cloud rendering, it has been proven difficult to get completely photo-realistic rendering with neural network fixes. The remaining issues make a domain gap between the synthesized and real images. Therefore, we formulate the rendering problem as forming a joint space ensuring a correspondence between rendered and real images, rather than trying to (unsuccessfully) render images that are identical to real ones. This provides a deterministic pathway for traversing across these domains and hence undoing the gap. We add another network "u" for target image (I_t) and define the rendering loss to minimize the distance between f(I_s) and u(I_t), where "f" and "I_s" represent the filler neural network and point cloud rendering output, respectively (see the loss in above figure). We use the same network structure for f and u. The function u(I) is trained to alter the observation in real-world, I_t, to look like the corresponding I_s and consequently dissolve the gap. We named the u network goggles, as it resembles corrective lenses for the agent for deployment in real-world. Detailed formulation and discussion of the mechanism can be found in the paper. You can download the function u and apply it when you deploy your trained agent in real-world.

In order to use goggle, you will need preferably a camera with depth sensor, we provide an example here for Kinect. The trained goggle functions are stored in assets/unfiller_{resolution}.pth, and each one is paired with one filler function. You need to use the correct one depending on which filler function is used. If you don't have a camera with depth sensor, we also provide an example for RGB only here.

If you use Gibson Environment's software or database, please cite: