This project serves for analyzing, and transferring your ratings from one movie tracking / rating website to another.

The goal of this project is to have a universal tool which can transfer your ratings from any site to another without the need of any manual steps like configuring an API access or whatever. Just configure your credentials (see steps'below), start the tool and relax.

This also works if your lists are marked as private, as this tool uses a browser to login and get the content.

How do I use this?

Natively on the command line

This project is currently still under development. Please be patient, as I'm only working on this every once in a while.

Inside a Docker container

Please note: This is currently not working on Windows. See issue #19

You can also omit the destination argument in order to just save the parsing results to a JSON file. You might insert the saved results anytime later. (see below)

-s / --source: the site where the ratings are parsed from (see Available Parsers). This parameter must be given in even if you use the -f option.

-d / --destination: the site where the ratings should be posted (inserted) to (see Available Inserters). If you don't specify any destination, the ratings are only parsed and saved locally.

-D / --all-destinations: try to insert the parsed ratings to all configured sites for which valid credentials can be found

-f / --file: read ratings from a previous run instead of parsing them

-x / --show_browser: show the browser doing his work (this might help for debugging))

-h / --help: Display the help, including all possible parameter options 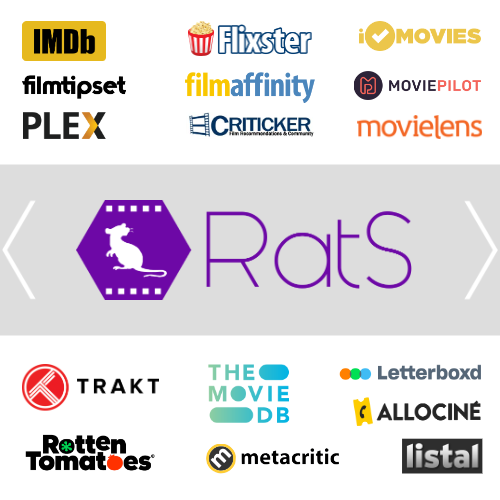 Depending on what you used in the first run:

You can re-use the data you parsed before, without parsing again. This will help you, if you want to distribute from one source to multiple destinations. The parser tells you in which file he saved his result, the folder is ./RatS/exports. You can use this data by calling the script for example this way:

Please notice, that the --source argument is still needed in order to identify which data to use from the given file for the inserter.

Furthermore: This section is meant to be used with the native command line version. Docker containers work differently.

You can copy the exported JSON from/to the Docker container if you like. I don't recommend this if you have no experience with docker. If you have, you already know what to do here ;)

Script aborts because of Timeouts

It might occasionally happen, that the script runs into errors caused by the page loading too slow. In the past, this was quite an issue. I now tried to build a mechanism with dynamically increasing timeouts. Therefore, the script sleeps for one second after failing the first try (effective for multiple problematic locations in the code), waiting two seconds after the second try failed, and so on. The maximum number of tries is ten. If this is reached, the error gets re-raised and the script will fail.

If you recently updated your Firefox, you might encounter the following exception during the login attempt of the parser:

This can be fixed by installing the latest version of Mozilla's Geckodriver by running again the Install Geckodriver command mentioned above.

Script aborts with MoveTargetOutOfBoundsException while inserting to IMDB

IMDB shows special promotional banners for certain movies. If they are too big, they will cause the ratings component to be out of the viewport of the browser and the script fails with something like:

For now, the easiest solution is to run the script on your console with the -x flag. This will display the browser to you in a maximized window which then has a bigger viewport and prevent the error.

Login attempt does not work

This can have multiple explanations. One is, that you are using a password which starts or ends with a space character. RatS is currently not capable of dealing with that. If your credentials have a space character in the middle though, it will work fine.

While tying to login to Trakt, the script aborts with this error message:

This was observed to happen when the credentials were configured to use the email address for login. Try to set your username instead.

You are missing a feature or noticed something is wrong?

Before submitting a bug ticket, I would ask you to check first whether all dependencies are up-to-date, especially geckodriver.

Please write a ticket, I will have a look as soon as I can.

Where does the name come from?

The name for this project comes from the first letters of "rating synchronisation". It is that simple. It is also a reference to the movie "Departed".