Check out my blog on my progress and process throughout GSoC 2019!

Given an audio file of some recognizable song, autosynch will try to align its lyrics to their temporal location in the song. The song lyrics must be available on Genius.

This project is still in its early stages and is inaccurate in many cases. Optimization is a work in progress, but feel free to try it out, modify it, or contribute!

Developed during Google Summer of Code 2019 with CCExtractor.

To install, do the following:

Note: autosynch is supported only on Python 3.6+.

Using autosynch requires a trained model for vocal isolation as well as PortAudio. For mp3 support, SoX is required. On MacOS/Linux, get everything by executing:

Weights must be placed into autosynch/mad_twinnet/outputs/states.

Note: Installing SoX is optional and only required for processing mp3 files.

To play a song with its lyrics displayed at its calculated position:

If you have already generated and saved an alignment data file:

If you would like to process an mp3 file, see this section. Running with an mp3 will automatically generate a wav file in the same directory.

Note: If you did not use setup.sh, first make sure you set your Python environment correctly with export PYTHONPATH=$PYTHONPATH:./ from the outer autosynch directory. 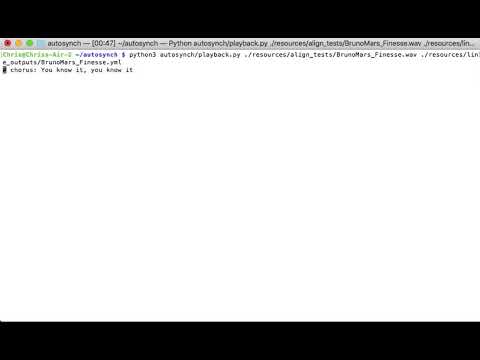 The last chorus lags behind a bit, but for the most part sections and lines are nicely aligned. 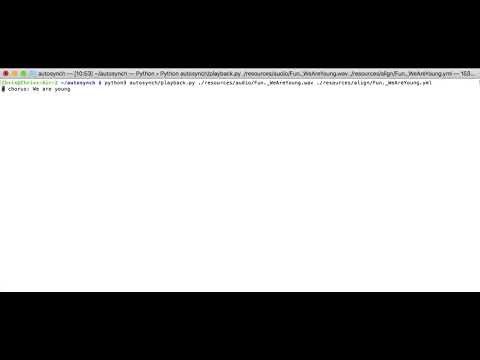 The instrumental at the beginning throws off the first verse, but everything catches up in by line 4.