The Cave of Caerbannog

An "Oculus Rift" game made in java, based on the jMonkey engine. This project is made by the group MIGI2 for the TU Delft context project 2015-2016. 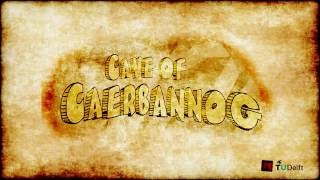 The Cave of Caerbannog is an award winning dungeon slash maze game with a simple goal: get to the treasure without dying. At least, that is the goal for some of the players.

The players are divided into 2 teams, with 3 different roles: One player (the "knight") is wearing the Oculus Rift. This player has a first person view of the maze and performs various actions in it. He is able to run around in the maze and pickup items like keys and bombs. Bombs will explode quickly after being picked up, so he has to think about what he want to do with it first.

There are two players that will work together with the knight, the “Elves”. They are only able to see already explored parts of the maze, and will have a top-down, 2d view. The helpers can “see” things the knight cannot, and can influence the maze. For example drop crates or distract enemies.

The last group are the dwarfs: two players who will work together to try to prevent the treasure from being stolen. The dwarfs have a view similar as the helpers, but are able to see the entire maze. The dwarfs have an arsenal of measures they can employ to reach their goal. For example laying mines, throwing bombs and spawning killer bunnies.

The development team consists of the following people