Its finally here, after popular demand. This release enables support for Windows. See below for an installer exe.

Note that there hasn't been extensive testing done yet so this should be regarded as beta quality.

There also some missing features, notably:

Note that FFMPFG isn't included but is required for certain features. You will be prompted to download this if/when needed.

This feature allows for using Tauon running on another PC as a network source. (Experimental)

In addition, network tracks can now be transcoded to local storage using the "Transcode Folder" feature. Transcoded tracks will now be used as a fallback when the primary source is offline.

Currently just basic playback works, but more features may be added in the future.

The artist panel has been given a tuneup, restoring support for artist images from Last.fm (now uses scraping). Toggling the artist info panel is now done using Ctrl + o.

Note: To keep load to a minimum, fetching images from last.fm has been disabled for the artist list panel, but will still use images that have been obtained via the artist info panel.

This one has taken a little while. But with the many subtle fixes and improvements, Tauon is really starting to become a polished app!

On becoming a supporter

It can be pretty painful to donate to your favourite projects when you don't feel like you're directly getting anything for it. Our R&D team has been hard at work finding a way to get you something extra without flying in the face of free software ideals. With that in mind, we have a result, a new supporters exclusive theme!

Will you let her charm her way into your heart?

This theme is available for sponsors on tier 2 or higher. If you'd like to join, see my GitHub sponsors page here. 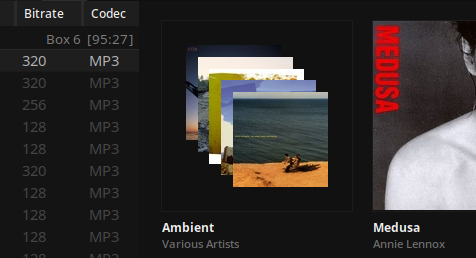 Folders of singles now have a new stacked thumbnail style in the gallery. This is a little experimental and may need some further tweaking. Let me know what you think.

This means that the Phazor backend is now the default and only backend. The Phazor branding in the UI has been removed, so it can just be considered part of Tauon without need of distinction.

If you use streaming in Tauon, let me know what you think of this feature.

Support for the codecs WMA and APE is no longer included with the base Flatpak install of Tauon. These codecs now require an external optional add-on package. To install this just run:

Codec support for TTA has been lost. Let me know if anyone used this codec.

Experimental JPEG XL support has been added to make it possible to read album art in this format. For this you'll need to install the new optional dependency python-jxlpy (AUR). Not yet included with Flatpak install.

You can now control basic playback and playlist navigation using a gamepad. See Controller Mapping for how the buttons and sticks are mapped.

As always, consider becoming a supporter if aren't already. It goes a long way with helping motivate me to continue working on this app!

This dialogue can be accessed by going to a playlist tab right click > "Export...". It provides the following new functionality:

There is now a setting to show a track context menu option that starts a stream from that location in the playlist, and points your Chromecast to it. For more information see the wiki page here.

This update features an overhauled internet radio UI. The interface has now become its own layout view rather than a overlay box. You can switch to it using the view switcher shown when clicking MENU.

Notable additions are the support for station thumbnail icons and support for multiple "Lists" (i.e playlists for radios). Also the process for adding and removing stations has been simplified. Another change is that recorded tracks are now imported to a playlist automatically.

Note: Any previous saved stations will be carried over, but they wont have thumbnails. You'll need to re-save the stations from the station browser to get thumbnails.

Note: The radio record setting has been moved to page 4 of Settings > Function.

Also added Gensokyo Radio to the list of supported stations with album art. You can find a list of these stations in Tauon by holding the shift key when viewing the station browser to reveal a secret button.

In the radio layout:

Known Issue: Sometimes starting a station fails and you need to restart Tauon before audio can be played again.

Upgraders to v7.0.0 will notice a one off donation prompt. I really don't like adding nags/self-promotion, but I need to balance that with what's fair. Feel free to let me know what you think.